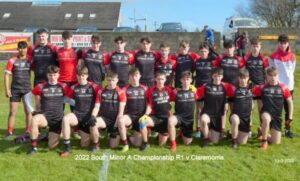 Claremorris were visitors to Davitt Park on Sunday for a South Mayo U-18 A Championship clash and the draw was probably the fairest outcome after a very exciting encounter. Claremorris looked the better side in the first half and led by five points at halftime but Davitts dominated the second period with Claremorris having to point with the last kick of the game to earn the draw.

A Claremorris goal in the second minute gave them a dream start. They added a point in the sixth minute but three Davitts points from Cathal Corless, Dylan Gallagher and Jack Melvin in the next five minutes narrowed the gap. A 16th minute Claremorris point was cancelled out by a similar score by Harry Fallon for Davitts in the 20th minute. The visitors had three goal chances which were superbly saved by Dylan O Brien, Davitts outstanding goalkeeper. The Davitts defence were working overtime and coping admirably with the Claremorris attack. Claremorris pointed again in the 27th minute and they capitalised on a Davitts defensive error in the last minute of the half to score a second goal and lead by 2-3 to 0-4 at the break.

Davitts looked a much better team in the second half with midfielders Cathal Corless and Jack Melvin getting a grip on the midfield sector. Dylan Gallagher was fouled in the square in the first minute of the second half but Jack Melvin’s penalty was well saved by the Claremorris keeper. Dylan Gallagher, proving a real menace up front for Davitts, goaled in the 34th minute and the same player shot over points in the 36th and 41st minutes to tie the game. Claremorris finally opened their second half account with a 51st minute point although two top class saves by Dylan O Brien had denied them what looked like certain goals. Dylan Gallagher pointed in the 53rd minute but Claremorris replied immediately with a point of ther own. A 56th minute Cathal Corless point tied the game again and Dylan Gallagher fired over in the 61st minute to put Davitts in front for the first time in the game but Claremorris managed to shoot an equalising point with the last kick of the match.

Davitts will play Ballinrobe (already qualified for the South final) next week and a win or draw in that game for Davitts would see those two teams contesting the final.