Davitts U-14 Squad, having qualified for the National Feile Peile na Nog Finals for the first time in the Club’s history, travelled to Co. Fermanagh last weekend. We were hosted by the Tempo Maguires Club and honestly couldn’t have had better hosts.

The welcome and hospitality which the team and supporters received over the weekend was overwhelming and we will be forever grateful. We wish Tempo Maguires the best of luck on and off the field and we look forward to meeting our new friends again in the future.

Our Squad of boys were a credit to their families and the Club over the Weekend. Their behaviour was lauded by all that met them as was their skill and sportsmanship on the pitch.

We had big wins on Friday against Gloucestershire and Ederney St. Josephs. On Saturday morning we defeated our hosts Tempo Maguires to top the group and then travelled to Corlough, Co. Cavan to face Glencar Manorhamilton in the Quarter-Final.

We lost an epic encounter after extra-time but, while the defeat hurt initially, when the dust settled we all realised that we had participated in an unique sporting occasion and the fond memories of the weekend will long remain with us all.

The U-14 Team travelled to Knockmore on Tuesday evening to play the County U-14 B Semi-Final against the locals but were defeated by 3-9 to 2-5.

Having to play such a game just two days after returning from Fermanagh after the Feile Weekend proved a step too far, as tiredness and injuries caught up with the Davitts lads, who put up a brave show nevertheless.

Davitts got off to a flyer with 1-1 from Jack Devane in the opening two minutes. Knockmore chipped away at the lead and two goals by the homeside left them ahead by 2-3 to 1-4 at halftime, with the outstanding Thomas Ronayne and Jack Devane (2) getting Davitts other three first half points.

Both defences were on top in the second half and with eight minutes remaining Knockmore were ahead by 2-8 to 1-5. Davitts were awarded a penalty which was superbly saved by the Knockmore keeper (one of a number of top class saves he made over the hour). Knockmore went down the field and goaled themselves from the kickout. They added another point before Jack Melvin goaled for Davitts in the final moments of the game.

Davitts battled hard throughout and in Fionan Gallagher, Thomas Ronayne and Jack Devane they had three outstanding performers. Micheal Hett, Cathal Devane, Brian Og McTigue, John Wallace and Bon Glynn never stopped trying but it is Knockmore who will contest the Final.

The Senior Team went down disappointingly to Ballaghaderreen in Div 1A of the Senior League in Ballindine on Sunday morning. The first half was even but the concession of a soft goal in injury time left the visitors ahead by 1-6 to 0-5 at the break.

A nasty looking ankle injury to midfielder Cathal Hennelly didn’t help Davitts cause in the second half. Davitts threw everything they could at Ballagh in that second half but the visitors held on to a four point victory, a result that leaves Davitts in a precarious position near the bottom of the table.

The Minor Team had a tremendous battle with Hollymount Carramore in the Summer League match played in Mayo Abbey on Thursday, coming out on top in the end by 4-13 to 3-13.

Some of the scores kicked by both sides were out of the top drawer with Davitts midfielder Jack Ronayne in superb form scoring 2-7.

Davitts trailled by 3-3 to -10 at the break but four well taken second half goals by Jack Ronayne (2), Zack Keadin and James Ruane swung the game in their favour. 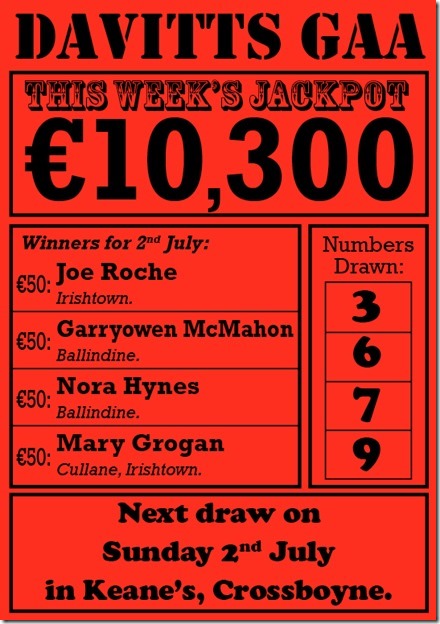 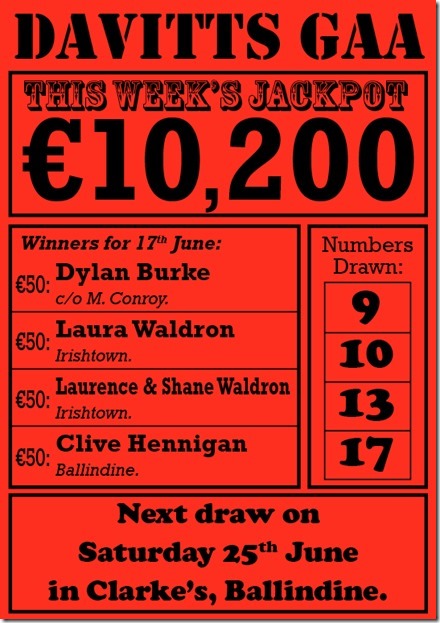 Davitts will be competing in Division 7 of the Feile Peil Na nOg Finals at the weekend.

The 16 competing teams are as follows:

When Davitts play afterwards is depending on their finishing position after the Group C matches. We will be playing the next phase in Corlough, Co. Cavan.

(Tempo Maguires to Corlough Gaa is 45mins by car).

If Davitts win Game 4 on Saturday we will play on Sunday in Devennish St Marys GAA Ground (Garrison).

(Tempo to Garrison is 51 minutes by Car).

If Davitts are unsuccessful in Game 4 we will make the trip home to Mayo.

Shield and Cup Finals are at 2:45pm and 3:30pm in Derrygonnelly.

(Garrison to Derrygonnelly is 21 minutes by Car).

Safe travelling to our team and supporters. Enjoy this very special occasion

Davitts and Ballaghaderreen clashed in the second round of the Senior Championship in Ballindine on Saturday evening with the East Mayo side edging the contest by a point.

Liam Kearns opened the scoring for the homeside with a 2nd minute point but Barry Regan flicked in a goal from a long Andy Moran delivery to give Ballagh the lead a minute later, a lead they were not to surrender for the remainder of the game.

Andy Moran, superb throughout, pointed in the 6th minute and points from Ronan McNamara and Liam Kearns for Davitts and Barry Regan for the visitors left two points in it before Moran scored a crucial second goal for his side in the 13th minute, beating a number of Davitts players before shooting to the bottom corner.

Michael Conroy and Liam Kearns for Davitts pointed as did Gavin Conway and Barry Regan for Ballagh to leave Ballagh ahead by 2-4 to 0-5 at the break.

Barry Regan was on the mark twice for Ballagh in the opening ten minutes of the second half with Cathal Hennelly and Liam Kearns pointing for Davitts.

Three Cathal Hennelly points for Davitts kept them in touch and Liam Kearns got on the end of a super move for the home side but blazed narrowly wide with nine minutes remaining. Ballagh capitalised on their let off with Gavin Conway pointing and Andy Moran grabbing his second goal of the match, in the next two minutes.

Michael Conroy pointed to narrow the gap to five points and the same player was unlucky to see his deft flick hit the post with the keeper beaten as time ran out for the homeside.

Liam Kearns narrowed the gap to three but a breakaway point from Shairoze Akram, as Davitts players were throwing everything into attack, was a vital score for Ballagh because Davitts went straight down the field and Ronan McNamara goaled again.

Time ran out for Davitts as Charlie Collins blew the final whistle on the kickout.

Davitts hosted Lacken in the County Junior B Championship in Sunny Ballindine on Sunday and defeated the visitors by 1-13 to 2-8 after a fine contest.

Davitts were the better team in the first half, and led by five points at the break, but the visitors played with great spirit in the second half and Davitts had to pull out all the stops to gain the victory.

Davitts were ahead by 1-6 to 0-4 at halftime after scores from Darren Connolly (1-3), Clive Hennigan, the recipient of a harsh black card, (0-2) and Seamus Roche (0-1). Tommy Mitchell and William Freeley were lording the midfield sector and Davitts looked to be in control.

Lacken came out with all guns blazing in the second half and when they scored their second goal, with eight minutes remaining, only a point separated the sides.

Davitts finished well however and two well taken long range points from Micheal Mangan and Tommy Mitchell saw them over the finishing line.