Club and Group ticket offers for All Ireland Quarter Final

The deadline for Club and Group pass ticket applications is noon this Wednesday, August 1st for this weekend’s Quarter Finals. Contact Ronan Kirrane to register your interest!

• All Ireland Quarter Finals/Semi Finals only

• Applications must be made by the Club Secretary

• Strictly limited to 1 application per Club

• 1 adult free for every 10 juveniles

• Applications must be made by the Club Secretary

• Strictly limited to 1 application per Club

Davitts U-21 team defeated Lahardane by 2-16 to 3-5 in the C Championship in Bofeenaun on Tuesday evening. Davitts, who already qualified for the quarter finals, needed to avoid defeat to top the group, and set about their task from the throw in. Josh Ronayne, the game’s standout player, led the charge up front scoring 2-10 in an outstanding display. Davitts led by 1-9 to 0-0 at half time and extended that lead before relaxing in the final ten minutes. Davitts were without star players David Mitchell, Andrew Peters, Michael Waldron, Gerard McWalter and Darren Connolly on this occasion but their teammates worked extremely hard and the team will approach the knock out stages of this competition full of confidence.

Davitts U-16 team produced a fantastic performance in the Championship on Tuesday evening when travelling to Aghamore and defeating the homeside by 5-8 to 4-7 after a pulsating game of football. Aghamore started brightly and led by 2-1 to 0-0 after five minutes before Evan Ronayne goaled to settle the Davitts lads. The home team led by 3-4 to 2-2 at the break, Richie O Connor the scorer of the second Davitts goal.

Shane Treacy and man of the match Jack Rodgers pointed early in the second half and Rodgers goaled superbly to level the match. The game ebbed and flowed but Davitts finished stronger and a fourth goal by Gerald Griffin clinched the win. This game was a tremendous advert for football with both teams playing hard but fair football, with a lot of attacking flair.

Best for Davitts were Dylan Keadin, Padraig and Michael Mangan, Jack Rodgers, Seanie Burke, while all five forwards worked tirelessly and their movement and link up play was a joy to behold.

Davitts proved much too strong for Breaffy in this vital Senior Championship tie in wet and windy Ballindine on Sunday. Davitts, in their first year back in Senior football, needed a win to ensure their senior status and set about dismantling the Breaffy challenge from the throw in. Aidan McTigue, outstanding throughout, opened the scoring after ten seconds and Ronan McNamara doubled the advantage a minute later with a trademark free kick from way out. Conor O Shea pointed for the visitors in the 5th minute before Davitts assumed full control of the game. Points from McNamara (2), McTigue (2), the very impressive Josh Ronayne and the inspirational Colm Boyle stretched the Davitts lead with Breaffy’s only reply coming from midfielder Brian Howley. The crucial score came in the 18th minute when the hugely influential Michael Conroy dispossessed a Breaffy defender and Fearghal McGrath goaled superbly to put Davitts 1-8 to 0-2 up. Further points from Josh Ronayne in the 27th and 29th minutes and another Ronan McNamara bomb in the 30th extended the homeside’s lead to eleven points before Aidan O Shea pointed a free kick to leave the halftime score, Davitts 1-11, Breaffy 0-3.

Any hopes that Breaffy might have had of getting into the game, with the assistance of the wind in the second half, were dashed in the first twelve minutes as Davitts poured on the pressure and scored four great points through Josh Ronayne, Fearghal McGrath (2) and David McDonagh. Breaffy corner back Kevin Scahill pointed in the 48th minute and Conor O Shea had the games final score with five minutes remaining.

Davitts had heroic displays all over the field and produced a magnificent display from start to finish, full of aggressive tackling and intelligent football. Alan Roche, Colm Boyle, Ronan McNamara, Paul Carey, Josh Ronayne, Aidan McTigue and Michael Conroy could all stake legitimate claims to the man of the match award.

Breaffy will want to forget this game as quickly as possible and only Kevin Scahill, Aidan, Conor and Seamus O Shea and Brian Howley had any impact on the game.

Davitts U-21 team made it two wins from two outings in the Championship, with a fine victory over Kilmeena in Ballindine on Monday evening. The final scoreline was 5-14 to 1-7 but most of the damage was done in the first half as the forwardline put on a fantastic display. Davitts, playing with the assistance of the wind in the first half, had built up a 4-10 to 1-3 lead at the break with Josh Ronayne (2), Clive Hennigan and Darren Connolly bagging the goals, and the movement of those three players and the outstanding Andrew Peters and Tommy Clarke was most impressive. The midfield partnership of Michael and Sean Waldron were winning loads of possession and linking well with the attack.

Kilmeena came more into the game in the second half and fought bravely but lively substitute Thomas Waldron put the final nail in their coffin with a fifth goal ten minutes from time.

There will be tougher tests ahead for this young Davitts side who have now clinched a quarter final slot. David Mitchell was in top form in goals and county minor Donal Ronayne was arguably the man of the match getting great assistance from Cathal Higgins, Mark Ronayne, William Freeley and Jason Connolly. Andrew Peters (surely county minor standard) was at the heart of every attack, while the finishing of Darren Connolly, Clive Hennigan and Josh Ronayne was clinical.

Davitts Senior team travelled to Ballaghaderreen on Saturday evening and were defeated by their hosts by 1-9 to 0-4, in the Michael Walsh Secondary League. The match was tight all through and it was only in the last twelve minutes of the contest that Ballaghaderreen stamped their authority, scoring an unanswered goal and three points. Davitts trailed by 0-4 to 0-3 at the break, Ronan McNamara, Fearghal McGrath and Aidan McTigue the point scorers, but could only tag on another point by Paul Carey in the second half, with a combination of bad shooting and bad decision making on the ball, contributing greatly to the defeat. Davitts best performances came from Colm Roche, excellent at corner back, his brother Alan, James Cummins, Paul Carey, Aidan McTigue, Michael Waldron and Andrew Peters.

Davitts minor team were defeated by Breaffy in the Summer League in Ballindine on Friday evening. The final score was 3-15 to 3-5 after Breaffy completely dominated proceedings in the second half. Davitts led by 3-3 to 1-4 at halftime with goals by Thomas Waldron (2), easily Davitts best player, and the lively Matthew Trench, as the understrength homeside had the advantage of the stiff wind.

The stronger Breaffy team played some great football in the second half and would have won by more but for some top class defending by the overworked Brian Clarke, John Macken, Cathal Higgins and Ger McWalter, and a few superb saves by Michael Mangan.

Best of luck on Sunday, lads

Best of luck to Donie Ronayne and the Mayo Minors and to Colm Boyle, Michael Conroy and the Mayo Seniors in their respective Connaught Finals on Sunday in Hyde Park.

The U-21 championship match against Kilmeena is on Monday evening next (July 16th) at 8pm in Ballindine. Please support. 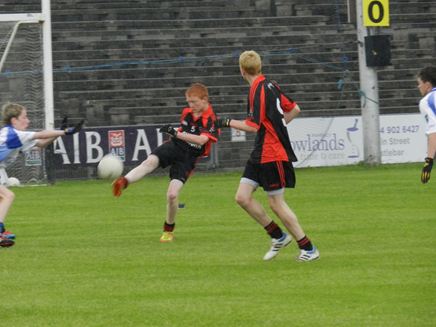 Davitts U-16 team continued on their winning ways with an impressive 1-15 to 1-7 victory away to Ballintubber, in the County Championship, on Monday evening. Davitts raced into a 0-6 to 0-1 after 15 minutes but Ballintubber took over for the remainder of the first half and led by 1-4 to 0-6 at halftime.

Davitts came out fired up for the second half and Padraig Mangan, Michael Mangan and Jack Rogers began to dominate the midfield sector. Excellent points by Rogers and Evan Ronayne put Davitts on their way to victory and a well struck Cathal Hennelly goal with five minutes remaining effectively ended the game.

A Train Service to Roscommon will operate this Sunday (15th July) as follows:

available on-line at www.irishrail.ie or at your local Iarnród Éireann Station. Passengers are not permitted to bring Alcoholic Drinks on board the train. Advance booking is essential.