Davitts minor team began their Summer league campaign with a good 3-13 to 0-12 win away to Islandeady on Friday evening. Davitts always held the upper hand in this tie with Mark Ronayne in outstanding form at midfield. Davitts, minus the services of Andrew Peters and Gearoid Lyons, had other star performers in Donie Ronayne, Brian Clarke, Cathal Higgins, who had a stormer at centre half back, Jason Connolly, Clive Hennigan and Darren Connolly.

Davitts U-21 team qualified for the County B semi-final for the second year in a row, defeating Kiltane by 2-10 to 1-8 in a hard fought quarter-final played in Knockmore on Thursday evening. Kiltane started brightly but a well taken Darren Connolly goal in the fifth minute settled the Davitts nerves, playing without Michael Waldron (holidays) and injured captain Keith Prendergast. Points from Liam Kearns (3), Darren Connolly and Josh Ronayne (2) saw Davitts build up a 1-6 to 0-4 lead at half-time,

Kearns leading the attack superbly and the Davitts defence limiting the Kiltane lads to just one point from play with Kevin Gallagher inspiring his colleagues with his usual committed defending and goalkeeper David Mitchell having an excellent game.

Two early second half points from Josh Ronayne (after a fine run by the hard-working Richie Kilkenny) and Fergal McGrath, shrugging off the affects of a virus, gave Davitts some breathing space, but Kiltane had no intention of going down without a struggle and four unanswered points from them left just a goal between the sides with fifteen minutes remaining. The Davitts defence proved their worth in this period with the superb Gallagher, Mark Ronayne, Jason Connolly, Johnno Clarke and Gerard McWalter (G-Mack) defending tigerishly, getting great assistance from midfielders Tommy Mitchell and John Heneghan, and David Mitchell pulling off a number of top class saves. A McGrath point lifted the siege and when Josh Ronayne flicked McGrath’s centre to the Kiltane net with five minutes remaining Davitts were almost there. Kiltane finally breached Mitchell’s goal in injury time but Liam Kearns had the final say with another terrific point from an acute angle. Davitts will have to improve on this display for their semi-final clash with Moy Davitts.

Please note that the U-21 B Football Championship Quarter Final v Kiltane will now be played in Knockmore at 7:30pm. Your support will be greatly appreciated to cheer on this very talented team. 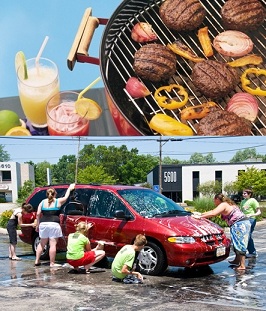 Davitts GAA Bord na nóg is teaming up with Davitts Ladies GAA to hold an all day carwash and barbeque at Hennigan’s Centra next Saturday, 30th July. The barbeque kicks off at 1pm and runs through till 4pm, while the carwash will be open for business from 9am to 7pm. Superstar DJ Frankie Barrett will be spinning out the tunes during the barbeque for your enjoyment, so why not take 15 minutes out of your day and come along for a nice burger while our teams of boys and girls wash your car!

Both Davitts and Davitts Ladies would like to thank John & Patricia Hennigan for their generosity in sponsoring all of the food for the day, the use of their carwash and their facilities. Hope to see you there!

The U-16 team suffered a heartbreaking one point defeat, 1-7 to 0-9, away to Claremorris, in the semi-final of the South Mayo A Championship, on Friday evening. Claremorris looked the better team in a poor first half and they led by 0-4 to 0-2, both teams guilty of some terrible shooting. The second half produced much better fare with the result in the balance right up to the final whistle. Best for Davitts in this game were Michael and Padraig Mangan, Dylan Keadin, Donie Ronayne, William Freeley, Tommy Waldron, Michael Clarke, Gerard Griffin and ace marksman Liam Noone.

Davitts and Kiltimagh played a thrilling county U-16 Div 2 League final in Claremorris on Thursday evening, with the Kiltimagh girls edging it, 4-5 to 3-5, in what was a tremendous advertisement for the girls game. Davitts made all the early running, with star forward Ruth Kearns goaling superbly after a minute. Emma Nyland and Laura Corless were winning a lot of ball at midfield and points from Roisin Kearns, Lisa Sheridan, Chloe Dixon and Ruth Kearns and a brilliant goal by Aisling O Connor, after good work by Chloe Stephens, had the Davitts girls ahead, 2-4 to 1-2 at halftime.

Kiltimagh, physically much stronger, began to take control of the game in the second half and the Davitts defence were under severe pressure throughout. Excellent defending by goalie Marie Corless, Aoife McWalter, Laura Waldron, Aisling O Connor, Michelle Waldron and Aoife Ronayne kept Kiltimagh restricted to just two points in the 3rd quarter, but the girls in blue struck two goals in quick succession to take the lead with 13 minutes remaining. Davitts fought back and were awarded a penalty when the excellent Ruth Kearns was crudely grounded after a brilliant run. Laura Corless drove the spot kick narrowly over the crossbar to leave two points in it and within a minute Kearns had goaled again. Kiltimagh didn’t panic however, and a late goal and point sealed victory for them.

Fair play to the Davitts girls for their brave display that saw them come so close to adding an U-16 league title to the U-14 title won two weeks ago. A special word of praise to the management team of Patricia Waldron, Linda Mooney, Veronica Keadin and Michelle Waldron.

Davitts booked their passage to the county U-21 B Championship quarter final with a hard earned 2-15 to 0-14 victory over a gallant Round Towers side in a game played in perfect conditions in Ballindine on Tuesday evening. Davitts, lining out without Fergal McGrath and Clive Hennigan, and losing influential team captain Keith Prendergast with a hamstring injury at the start of the second half, led by a point, 0-9 to 0-8 at halftime. Two fine second half goals by Richie Kilkenny and the outstanding Johnno Clarke settled the contest as those two players, Liam Kearns, Tommy Mitchell and Kevin Gallagher upped their performances considerably. Others to shine were Prendergast, Josh Ronayne, goalkeeper David Mitchell, Darren Connolly and young Gerard McWalter.

U-16 girls qualify for league final

Davitts U-16 girls qualified for the league final after defeating Kilmovee, 8-14 to 2-6, in a rather one sided semi-final, played in Kilmovee on Wednesday evening. Ruth Kearns scored a whopping 5 goals, obviously inheriting her father Martin’s deadly eye for goal. Others to shine in this game were Laura and Michelle Waldron, Aoife Ronayne, Emma Nyland and Sarah Peters. Davitts play the final against Kiltimagh on Wednesday evening, July 20th.

Davitts had a fine 2-14 to 0-8 victory over Shrule-Glencorrib in the South Mayo Junior championship in Ballindine on Saturday evening. Davitts played some very good football in the difficult conditions and led by 0-9 to 0-4 at half time. The Davitts attack, with Josh Ronayne, Liam Kearns, Shane Mitchell and Richie Kilkenny in top form, linked well as they ran out convincing winners, dominating the second half. Liam Kearns bagged both goals in the second half, the first after a slick attacking move initiated by captain Pat Hopkins and the second a rather fortuitous effort from a free kick. Others to shine for Davitts were Tommy Nolan, JP Kirrane, Michael Ronayne, John Heneghan and Tommy Mitchell.

Afterwards the Intermediate team played a challenge game with an understrength Annaghdown side. Davitts dominated this game throughout with the outstanding Ronan McNamara and Paul Carey well on top at midfield and the attack in superb form to run out the easy 4-17 to 0-10 winners. Others to shine in this game were Colm Boyle, Keith Glynn and the very lively Aidan McTigue. 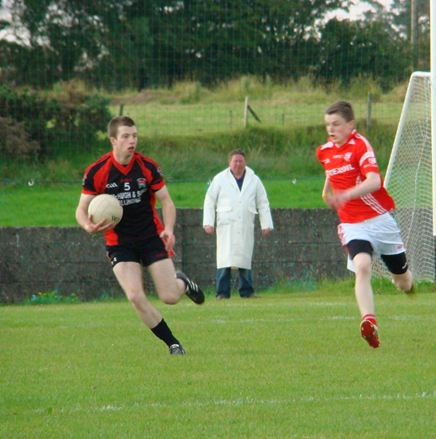 Davitts U-16 team defeated St. Gerards, 2-16 to 1-11, in the South Mayo championship, in Hollymount on Tuesday evening. Davitts were always in control in this game and easily qualified for a semi-final clash with close neighbours Claremorris next week. In a good team display the performances of William Freeley, outstanding in defence, and substitute Dylan Keadin, were particularly noteworthy.

At the same time as the U-16 team played in Hollymount, Davitts U-21’s had a great win over Bohola – Moy Davitts in Ballindine, in the County B Championship. (One has to wonder why U-16 and U-21 matches are fixed for the same evening). Davitts, who had led by 2-10 to 1-3 at half time after playing superbly in the first half, went on to win by 2-15 to 2-9, surviving a fine second half comeback by the visitors.

Davitts midfield pairing of John Heneghan and Keith Prendergast were in top form in that first half as the Davitts forwardline ran riot with the outstanding Fergal McGrath and Josh Ronayne terrorising the overworked Moy Davitts defence and getting great support from Liam Kearns, Darren Connolly and Richie Kilkenny. McGrath and Ronayne scored the goals after some exceptional teamwork.

Moy Davitts took the game to their hosts in the second half and it was the Davitts defence that had to work overtime during this period. Kevin Gallagher, Michael Waldron, Mark Ronayne, Johnno Clarke (pictured) and Tommy Mitchell defended superbly in front of the reliable David Mitchell in goals. Second half substitutes Jason Connolly and Clive Hennigan both played their part in a fine display.