Davitts minor team had a good 1-15 to 2-8 win over St. Cronans to qualify for the league Div 3 semi-final, in a game played on Sunday evening in Mayo Abbey. Davitts led by 1-9 to 0-3 at halftime, Clive Hennigan the goalscorer, and with Tommy Waldron and Darren Connolly causing panic in the St. Cronans defence, things looked good for the Davitts side.

St. Cronans however came storming back into the game in the second half but Davitts held firm with the halfbackline of Cathal Higgins, Mark Ronayne and John Macken in outstanding form, to win by four points. As well as those mentioned, Davitts had other top performers in Gerard McWalter, Brian Clarke, Andrew Peters and impressive sub Matthew Trench.

Davitts U-21 side began their defence of the Brennan Cup in Ballindine on Friday evening, making light of the difficult climatic conditions, to emphatically defeat Kilmaine by 6-14 to1-6. Davitts played some terrific football in this game and were well in command at the interval, leading by 4-9 to 1-2, after being wind assisted in the first half. Richie Kilkenny (outstanding throughout) set the ball rolling with a goal in the first minute after excellent work from the very impressive Fergal McGrath. McGrath himself bagged a brace of goals and team captain Keith Prendergast got his reward for a tremendously hard working performance at midfield, scoring the fourth goal after a stunning passing movement.

Davitts workrate didn’t ease off in the second half as the defence coped well with all that Kilmaine could throw at them. Further goals from McGrath and Darren Connolly sealed an impressive win for the homeside. Davitts had star players all over the pitch but the performances of Michael Waldron, Johnno Clarke, Keith Prendergast, John Heneghan, Richie Kilkenny and Fergal McGrath were particularly noteworthy.

A special treat awaits those people from the Ballindine/Irishtown area that travel to Castlebar on Sunday for the Mayo/Galway match. Emma Corr, captain of the all conquering Irishtown National School girls team, will play in the Cumann Na mBunscoil exhibition game at half time of the senior match between Mayo and Galway. Emma is daughter Brian and Fiona Corr, and is one of a host of outstanding young ladies players from our area who are sure to make a big impact in footballing circles in the coming years. If you are at the game watch out for Emma and give a special Davitts cheer as she struts her stuff.

Davitts Junior team made the trip to Westport on Sunday and were defeated, 2-12 to 0-6, by the local side in the first round of the Junior B championship. Westport were on top from the start and led by 1-7 to 0-2 at the interval. Any hopes of a Davitts revival were dashed when JP Kirrane was sent off early in the second half. Davitts fought hard but were always playing second fiddle to an impressive Westport side. Best for Davitts on this occasion were goalie David Mitchell, Tommy Nolan, Laurence Daly, Martin Cosgrove, John Heneghan, Tommy Mitchell, Shane Mitchell, Kevin Daly and Pat Hopkins.

Davitts U-14 team were well beaten, 8-21 to 5-7, by a strong Ballinrobe side in the South Mayo B Championship, played in Ballinrobe on Thursday evening. The result was never in doubt and Ballinrobe raced into a 5-12 to 0-2 lead at half time. Davitts battled gamely in the second half and were rewarded with three good goals by Daniel Huane and a brace by the impressive Evan Ronayne to put a better look on the scoreline. Best for Davitts were Cathal Moran, Ciaran Fahy, who had a superb game, Kieran Waldron, Evan Ronayne, Jack Ronayne, Daniel Huane and the Treacy brothers Shane and Cian. 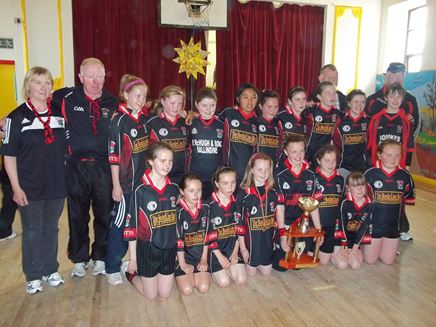 Congratulations to the Irishtown N.S. girls team that won the county Div 4 Cumann na mBunscol final in superb fashion, defeating Errew by 2-11 to 0-2, in Castlebar on Saturday. The Irishtown girls were on top from the throw in with Rebecca Waldron, Eilis Ronayne, Ciara Clarke and team captain Emma Corr in terrific form, and they led by 0-6 to 0-1 at the break. Whatever chance the Errew girls had evaporated in the first few minutes of the second half with Rebecca Waldron goaling and Ciara Clarke and Emma Corr adding two good points.

Errew kept trying hard but a second Irishtown goal from Ciara Clarke , after good work by Eilis Ronayne, sealed the win late in the second half. This is the second year in a row that Irishtown have won this competition and the future looks very bright for the Davitts Ladies. Well done to team coach Ger Conroy on this great achievement and who knows maybe next year a three in a row beckons?

Davitts came out on top of old rivals Kiltimagh in the first round of the Intermediate Championship in a thrilling game played in wet and windy Ballindine on Sunday. This was tough championship football between two evenly matched sides. Kiltimagh led at halftime, 0-5 to 0-4, but the games crucial score came two minutes into the second half when man of the match Michael Conroy cleverly flicked Paul Carey’s long delivery over the head of the Kiltimagh keeper and into the net. Kiltimagh fought back and the sides were level again with ten minutes remaining, but Davitts finished strongly with excellent scores from Colm Boyle, Ronan McNamara, Johnno Clarke and Michael Conroy.

The exchanges got very heated in those final minutes with outbreaks of handbags all over the field and Davitts James Cummins received his marching orders from referee Declan Corcoran (whose performance certainly wasn’t of the hometown variety). Davitts had excellent displays from Frankie Barrett, Colm Roche, Colm Boyle, who shipped alot of punishment, Johnno Clarke, Ronan McNamara, the tireless Paul Carey, Keith Glynn, Fergal McGrath and Michael Conroy who was superb throughout.

Orders can now be placed for tickets to Mayo v Galway in the Connaught Senior Championship Sunday 26th of June. €30 stand, €25 sideline, and concessions for students / OAP’s. Contact Billy Kearns, Frank Hyland or Ronan Kirrane (numbers can be found on Contacts Page)

Davitts will host old rivals Kiltimagh in the opening round of the Intermediate Championship on Sunday June 12th, in Davitt Park at 2pm. This is a repeat of last years quarter final which Kiltimagh won by a point. A large crowd is expected for what should be one of the ties of the weekend in either the senior or intermediate championships. Hopefully manager Peter Warren will have nearly a full strength squad to pick from and we wish him, John Treacy, Jarlath Trench and the boys the best of luck.

Commiserations to star players Colm Boyle and Michael Conroy who played for the Mayo Junior team that was narrowly defeated by reigning All-Ireland champions Sligo in the Connaught final. Both players played brilliantly and hopefully they will carry that form into next Sunday’s match against Kiltimagh.