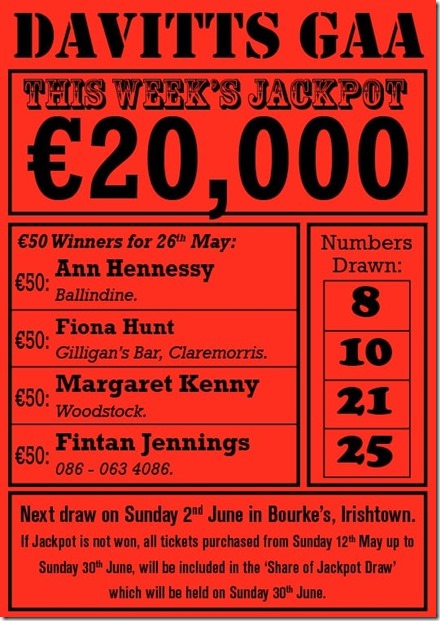 Fixtures for Week Commencing 27th May 2019

Davitts captured the County U-14 Div 3 League title with a 3-7 to 1-9 victory over Ballintubber on Thursday evening in Hollymount. It was a game that could have gone either way and was fought out with a great intensity throughout giving the large crowd real value for money.

Ballintubber started well and had shot two early points before the alert Dylan Gormally opened Davitts account with a well taken goal in the fourth minute. Four minutes later, Davitts caught the Ballintubber defence napping when Sean Keadin passed a quick free in to the imposing Harry Fallon who lashed the ball to the Tubber net. Ballintubber rallied, pointing a minute later, but they were finding it hard to make inroads through an impressive Davitts defence and their shooting was not as sharp as they would have liked.

Dylan Gallagher extended Davitts lead to four with a well taken point in the thirteenth minute. Amazingly there was only one other score in the first half, a well taken 20th minute goal from the impressive Fionn McLoughlin for Davitts, leaving his side ahead by 3-1 to 0-3 at the break.

It was Davitts who flew out of the blocks in the second half shooting four quality points in the opening five minutes through Fionn McLoughlin, Conor McDermott, Ronan Kelly and Harry Fallon.

Lesser teams would have folded but not Ballintubber. They began to dominate the exchanges for the remainder of the half. They scored two unanswered points in the 8th and 10th minutes and then found the net in the 13th minute to narrow the gap to six points. They shot three more points in the next ten minutes and Davitts looked to be in big trouble. A superb long range point from Harry Fallon lifted the siege in the 24th minute and Fionn McLoughlin fired over another to give Davitts a five point cushion with five minutes remaining.

In the last five minutes, and under extreme pressure, the Davitts defence was immense as they restricted Tubber to a single point scored in the 29th minute, and Davitts held on win by four points.

Brian Hett had a great game in goals and Brian Corless, Aaron Trench and Conor Feerick were very solid in the full back line. Ethan Boyle, Mark Birmingham and Seanie Meehan formed a superb half back line with any one of them being a potential man of the match.

Sean Keadin and Dylan Gallagher (0-1) had a great battle at midfield against a formidable Ballintubber pairing.

Conor McDermott (0-1) was an excellent leader of the Davitts attack in which Fionn McLoughlin (1-2) and Harry Fallon (1-2) took the scoring honours as Ronan Kelly (0-1), Ciaran Treacy and Dylan Gormally (1-0) worked tirelessly throughout.

A big thank you to Grogan’s Concrete, Ballyhaunis for their sponsorship. Tommy Grogan is pictured presenting a cheque to Davitts Chairman Larry Daly. 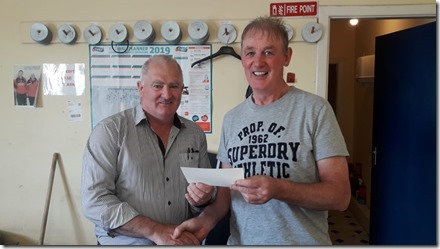 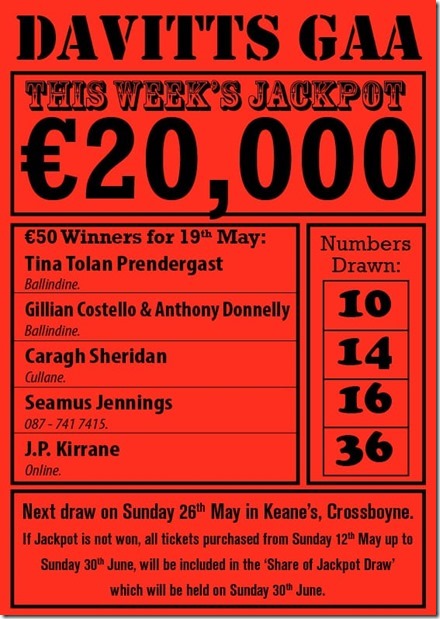 Fixtures for Week Commencing 20th May 2019

Many thanks to Molly’s Bar, Warrenpoint, Co. Down for their sponsorship. Liam Nyland is pictured accepting a cheque from the Proprieter John Joe McGee. Nice to see the Davitts flag flying outside the pub! 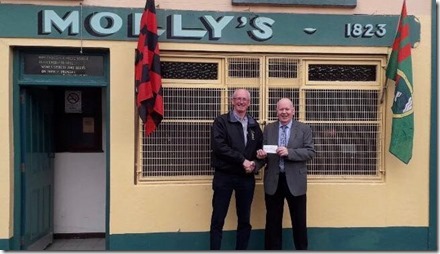 Davitts Junior team were defeated by Hollymount Carramore, 2-7 to 0-9, in the second round of the County B Championship in Carramore on Sunday. All four teams in the group have now won a game each so it will come down to the wire in the final round robin matches, to see which two teams progress to the quarter final. Kiltimagh and Louisburgh are the other two teams involved in this ultra competitive group.

Davitts chances of victory took a huge blow very early on when star forward Stephen Nyland received a black card in what looked like a ridiculous decision made by the linesman. To say that both sets of supporters were surprised with the decision would be an under-statement.

Hollycarra started brightly pointing twice in the 4th and 8th minutes. Two Liam Noone frees levelled the game before the homeside pointed in the 18th minute and goaled two minutes later. Two more Liam Noone points and one from Hollycarra saw them lead by 1-4 to 0-4 at halftime.

Hollycarra took the lead in the 27th minute and in injury time, with Davitts throwing everyone forward, the homeside sealed the win with a breakaway goal, to win by four points.

Davitts will play Louisburgh and Hollycarra play Kiltimagh in the next round, both games at neutral venues.

Davitts collected another brace of Senior League Div 3 points when defeating a gallant Lahardane side by 3-8 to 0-7 in Ballindine on Saturday evening. The scoreline suggests that this was an easy victory but Davitts had to dig deep to see off a very spirited Lahardane side.

The first half was a very dour affair with both defences on top. Davitts were playing into the tricky wind and two Ronan McNamara frees and a point from play by Darragh McGale saw them ahead by 0-3 to 0-2 at halftime. Davitts defence was impressive and well marshalled by Cathal Higgins and Padraig Mangan, with the dynamic Patrick Keadin having a blinder and Kevin Gallagher, Dmitry Trench and Liam Macken also impressing.

Davitts started the second half with real intent and Darragh McGale goaled in the first minute after great work by Cathal Hennelly. The same player added a point a minute later and Ronan McNamara extended the lead with another point before he scored his side’s second goal in the fifth minute, Cathal Hennelly again with the assist, seconds after the visitors had opened their second half account with a good point.

Lahardane went on the front foot for the next twenty minutes and shot four unanswered points to cut the deficit to four points. Davitts finished with a flourish though with Cathal Hennelly pointing in the 25th minute, Stephen Nyland scoring a screamer of a goal after a good run through the middle two minutes later and Evan Ronane and Stephen Nyland landing injury time points.

As well as all the defenders Davitts had very strong performances from Ronan McNamara, Tommy Waldron, Stephen Nyland, Cathal Hennelly and Darragh McGale.

Davitts U-14 team advanced to the Div 3 League final with a comfortable Semi-final victory over Ardnaree in Ballindine on Thursday evening. The final scoreline was 7-10 to 0-5 on an evening when little went right for the visitors. Ardnaree had defeated Davitts by five points when those two sides met earlier in the competition proving how unpredictable this level of football can be.

Davitts were dominant throughout the field and built up a healthy 3-4 to 0-2 halftime lead. Sean Keadin, Fionn McLoughlin and Ciaran Treacy finished the first half goals with Harry Fallon (2), Dylan Gallagher and Conor McDermott shooting the points.

Brian Hett was very solid in goals with Aaron Trench a capable full back, getting good assistance from corner backs Brian Corless and Conor Feerick.

Davitts will now meet Ballintubber in the final.