On Saturday evening, the first team hosted an understrength Kilmeena team in the secondary league, and easily defeated them by 4-12 to 1-3. Davitts powered by their outstanding half backline of team captain Colm Boyle, Paul Carey and James Cummins, were never in any danger in this game. Others to impress in this game were Frankie Barrett, Ronan McNamara, Carlos O Gara, Michael Conroy, county minor Josh Ronayne and Aidan McTigue.

Davitts U-12 team travelled to Cong and defeated The Neale, 6-6 to 3-7, in a very entertaining game on Monday evening. In a tremendous all round performance Davitts had outstanding displays from goalie Lorcan Diskin, Ciaran Waldron, ace marksman Daniel Huane who amassed a personal tally of 5-1, Keelan Cosgrove, Liam and Aidan Macken, Kieran Fahy, Jack Ronayne and Evan Ronayne.

John A Noone’s charges bounced back from the narrow defeat against league rivals Kiltimagh by collecting another brace of points in Div 1F on Sunday when defeating Kilmovee Shamrocks, 3-17 to 1-4. In a game played in tropical conditions in Kilmovee, Davitts were in complete control all through and had outstanding performers in James Cummins, Tommy Mitchell, Pat Coyne, young Josh Ronayne, the evergreen Mark Diskin and Con Penny (adapting well to the weather conditions and scoring a goal, already a contender for goal of the season).

Games between Davitts and Belmullet are usually very hard and close and this was the case on Saturday evening when the two sides went to battle in Div 1B of the senior league, in sunny Belmullet. In a game that could have gone either way, the homeside eased their relegation worries with a one point win, 0-7 to 0-6. In this fantastic pitch on an evening that should have favoured forwards, the opposite was the case, with both sets of defenders having the upper hand. The notable exception was Michael Conroy who was in terrific form, beating a succession of markers.

Davitts started well and points from a Liam Kearns free and a brilliant individual effort from Conroy had them ahead after ten minutes but the homeside replied with four unanswered points before Conroy pointed to leave the minimum between the two sides at the break, 0-4 to 0-3. Ronan McNamara, Davitts impressive midfielder, equalised with an excellent 45, two yards in from the sideline, but both sides were finding it difficult to score. Kearns and Conroy cancelled out two Belmullet points and the teams were all square going in to the final tense minutes of the game.

Davitts spurned four gilt edged chances before Shane Nallen pointed what proved to be the winning score in the last minute. Davitts had the chance to equalise but Kearns free kick from 35 metres, after Dave McDonagh was fouled, went narrowly wide. Paddy Kirrane had another sound game in the Davitts goals and in front of him Frankie Barrett and Colm Boyle were magnificent in the fullbackline, as was centre back Paul Carey. Ronan McNamara excelled at midfield and up front, Michael Conroy was the standout forward in the game.

Davitts U-14 team got their league campaign back on track in Ballindine on Thursday, defeating Kilmeena 5-9 to 4-10 in a cracking game. Two early Davitts goals by Richie Connor and Cathal Hennelly suggested that Davitts might have things easy, but nothing could be further from the truth as Kilmeena stormed back into the game and led by 2-7 to 2-3 at halftime. Davitts enjoyed a profitable third quarter of this seesawing game and goals from Hennelly and Shane Treacy put them six points up before Kilmeena again fought back to get within a point of the homeside but Hennelly had the final say with the last point of this very entertaining game.

Davitts U-16 team travelled to Glencorrib on Tuesday evening and were defeated 1-12 to 1-9 by Shrule-Glencorrib in Div 2 of the county league. Shrule-Glencorrib’s ability to take their scores proved the difference as Davitts attack wasted several chances, particularly in the second half. Davitts led 1-5 to 0-6 at half time, Andrew Peters the goalscorer, but a Shrule-Glencorrib goal, in the opening seconds of the second half, proved to be the games vital score. They added two points straight away and Davitts were left chasing the game. Davitts best performers in this game were Gerard McWalter, William Freeley, who had an outstanding second half, Donal Ronayne, Cathal Higgins, Brian Clarke, Tommy Charles, Tommy Waldron and Liam Noone. 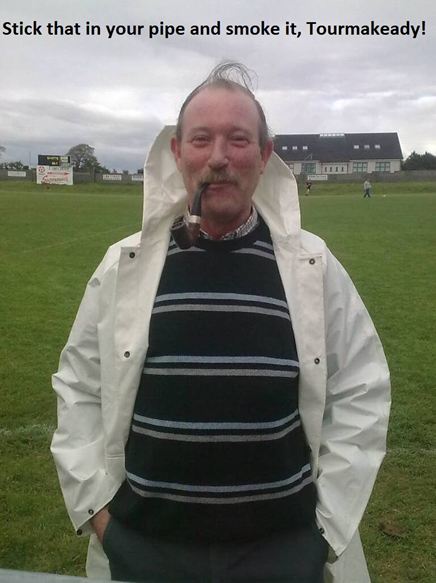 Davitts second team were defeated for the first time in Div 1F of the senior league, by league leaders Kiltimagh, who had to rely on a goal in the dying seconds of the game to win by two points, 2-10 to 0-14, in a thrilling game played in Ballindine on Saturday evening. Junior supremo – John A Noone – while bitterly disappointed with the outcome of the match, will be encouraged with the performances of his players, in particular Pat Coyne, in superb form at midfield, David Mitchell, Kevin Gallagher, Colm Roche, John Heneghan, Richie Kilkenny and second half substitute Josh Ronayne.

The senior team had a hard earned one point victory over old rivals Tourmakeady in a Senior League Div 1B league match played in windy Ballindine on Sunday evening. The final score was 0-10 to 1-6. Davitts made the early running, while playing with the wind in the first half, but a 20th minute goal by Kevin Dolan gave Tourmakeady a boost, and they only trailed by 0-8 to 1-2 at half time after Davitts had the bulk of possession.

Davitts defended their lead heroically in the second half, with every player excelling defensively. Paddy Kirrane was very alert in goals, with Colm Boyle, Frankie Barrett and Paul Carey magnificent in defence and Michael Conroy helping out well in the second half. Ronan McNamara had an outstanding game at midfield while up front Liam Kearns, Fergal McGrath and sub Josh Ronayne were most impressive.

Photos of U-16’s in action, sporting their new jerseys

A selection of photos from the U-16 game v Claremorris have been posted in the Gallery, which Davitts won by the narrowest of margins last Tuesday. Our lads were sporting a brand new set of jerseys, the latest style from O’Neills, so it was nice to christen the new set by beating the old enemy.

The jerseys were kindly sponsored by Sean Bourke, Irishtown. Davitts would like to take this opportunity to sincerely thank Sean for his generosity in sponsoring the U-16 Team in this way. There will be a few more photos to follow shortly of the official jersey presentation to the U-16 Team and Management by Sean and his Family.

The new-style jerseys look fantastic and will be the envy of many clubs (click on the “Download full size image” link under any photo in the Gallery to view an enhanced image. The new jerseys will be available to purchase in the coming months from the Club Officials – keep an eye out here and in the Church newsletters for more info.

Davitts minor team gathered another hard earned brace of league points at the expense of Ardmoy, in Ballindine on Friday evening, winning by 1-11 to 1-7. The game was closer than the scoreline suggests as Davitts trailed by three points at halftime, 1-5 to 0-5 and it took a goal by sub Darren Connolly, with less than five minutes remaining, to secure the victory. Once again, Donal Ronayne was superb in defence, getting good support from Gerard McWalter and Tommy Heneghan. Mark Ronayne and Michael Waldron did Trojan work at midfield while up front Josh Ronayne(0-8) was excellent all through while Clive Hennigan(0-3) showed what a talented player he is with a tremendous second half performance. Dave Mitchell was confident in goals, while Jason Connolly, Cathal Higgins, Dara Halligan, Tommy Clarke, Tommy Waldron and Darren Connolly all had their moments in what was a good all round team display.

An understrength Davitts U-14 team were narrowly defeated by Shrule Glencorrib, 4-10 to 3-10, in a very exciting league clash in Glencorrib on Thursday evening. Davitts had trailed by 4-4 to 1-6 at the interval, but fought with great spirit in the second half and almost snatched a last second equaliser when their very impressive midfielder Padraig Mangan tested the quality of the crossbar with a powerful shot from 20 metres. Minutes earlier the same player goaled, flicking Cathal Hennelly’s delivery to the net to ensure a nailbiting end to the game. Others to star for Davitts on this occasion were Dylan Higgins, Michael Mangan, Jack Rodgers, Gerard Griffin, Cathal Hennelly, Shane Treacy and Ritchie Connor. Davitts: Francis Griffin, Denis Og Fahy, Dylan Higgins, Keelan Cosgrove, Michael Mangan, Jack Rodgers (0-1), Padraig Mangan (1-2), Cathal Hennelly, Gerard Griffin (0-3), Shane Treacy (0-3), Sean Burke, Ritchie Connor (2-1).