This week’s Presto result.
The numbers drawn were 27, 34, 35, 36.
One player matched three numbers but the Jackpot was not won.
The following won €50 each:
Lena Prendergast, Dunmore
Cathal Corless, Crimlin (online)
Lena Prendergast, c/o David Huane
Jimmy Gallagher, The Shamrock Bar.
Thanks to The Shamrock Bar for hosting the draw. Next week’s draw will be held in Clarke’s Bar with a Jackpot of €19,500.
Use the link below to play online:

Belmullet U-17 team made the long journey to Ballindine on Friday evening but, after a hard fought game, Davitts claimed the two league points.

Conor McDermott and Ciaran Treacy put the homeside ahead with two early points. Belmullet opened their account with a fourth minute point. Ciaran Treacy and Fionn McLoughlin pointed for Davitts but two Belmullet points and a 14th minute goal put them ahead. Fionn McLoughlin pulled one back for Davitts but the visitors extended their lead to three points with another two minors two before Davitts hit a purple patch in the last five minutes of the half. Points from Sean Keadin and team captain Mark Birmingham were followed by a crafty Ciaran Treacy goal and points courtesy of Fionn McLoughlin and Conor McDermott to leave Davitts ahead by 1-9 to 1-5 at the interval.

Belmullet shot the opening point of the second half in the 34th minutes which was cancelled out by Fionn McLoughlin in the 36th minute. After Belmullet pointed in the 38th minute, Davitts shot their second goal, an excellent effort from the rampaging Sean Keadin, with Mark Birmingham added a point from the resulting kickout. Two more Belmullet points followed before a 49th minute Ciaran Treacy goal put Davitts firmly into the driver’s seat. Belmullet pointed twice before the final whistle but Davitts tagged on three more through Ronan Kelly, Sean Keadin and Mark Birmingham to win by a flattering eight point margin.

Davitts Junior team produced their best performance of the season when they were convincing winners over Breaffy in Div 4A of the Senior League in Ballindine on Sunday. Davitts played with the assistance of the stiff wind in the first half and, after a powerful display, had built up a 3-12 to 0-0 lead by the halftime break.

Jack Melvin got the ball rolling in the first minute when he converted a penalty after he was fouled in the square. A series of points followed before Liam Kearns finished his side’s second goal in the 20th minute. The very impressive Jack Devane added a third goal in the 25th minute as Davitts were dominant all over the field with all six forwards in outstanding form.

Breaffy needed to get off to a good start in the second half but Davitts had extended their lead, with Liam Macken and Ryan McLoughlin pointing and Jack Devane netting his second goal, before Breaffy opened their account with a 43rd minute goal. They added a further goal and three points before the end of the game but Davitts tagged on a fifth goal by John Kilkenny and a Liam Kearns point before Club secretary John Costello, a late replacement, justified his introduction with a superb point just before the final whistle, to the delight of the home crowd.

All of the Davitts players were on top of their game on this occasion with standout displays from Brian Clarke, Brian Og McTigue, Liam Macken, Danny Corless, Ryan McLoughlin and Jack Devane.

This week’s Presto result.
The numbers drawn were 5, 19, 31, 34.
Two players matched three numbers but the Jackpot was not won.
The following won €50 each:
Lillian Maye, Claremorris
Niamh Meehan, Irishtown
David Huane, Lisduff
Anthony & Caroline Conlon, Logalisheen.
Thanks to Bourke’s for hosting the draw. Next week’s draw will be held in the Shamrock Bar, Claremorris on Monday night with a Jackpot of €19,400.
Use the link below to play online:

Davitts continued their unbeaten start to Div 2B of the Senior League with an impressive seven point victory over Burrishoole in Newport on Saturday evening.

Davitts, wind assisted in the first half, and after conceding the opening score in the second minute, shot over two quick replies courtesy of Cathal Corless and Fenton Kelly to lead after four minutes. Cathal Corless added another three minutes later. The homeside pulled one back in the 13th minute but Davitts shot four unanswered points from Niall Treacy, Darragh McGale, Evan Ronane and Jack Ronayne to extend their lead to five points by the 18th minute. The last twelve minutes of the first half saw both teams score just a point apiece with Jack Ronayne getting the Davitts score.

Davitts started the second half well with a superb Shane Treacy point in the first minute. Burrishoole pointed in the 35th minute but Davitts, well on top now, replied with points from Evan Ronane, Niall Treacy and Cathal Hennelly in the next five minutes to go eight points clear. Burrishoole had their most productive spell in the next ten minutes, hitting four points on the trot as they looked to produce a grandstand finish. Davitts however had other ideas and scored the last three points of the game through Cathal Corless, Fenton Kelly and Liam Kearns to close out the game and claim the two league points. 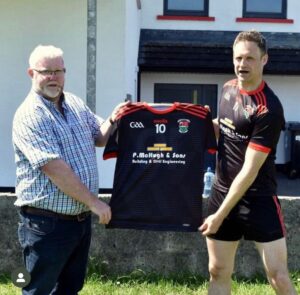 Many thanks to Dr. Thomas McGuinness, Dr. Catherine Sweeney, Dr. Eadaoin Townley and Dr. Susan Wilson from Ballindine Hub Primary Healthcare who sponsored a set of jerseys for our U-7 team. The new set of jerseys will have their first outing on Saturday when we will be taking on Carras and Hollymount Carramore in an U-7 Blitz.
Included in the pictures are Katrina Foran, Dr. Thomas McGuinness, Dr. Catherine Sweeney, Liam Nyland, Rachel Daly, Claire Dooley and Ann Marie Kelly. 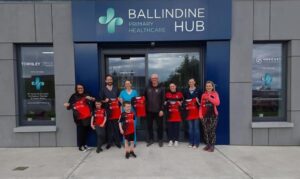 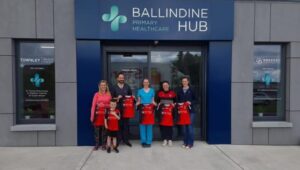 On Sunday June 26th, Mayo will play Kerry in the All-Ireland Senior football quarter final in Croke Park. The game throws in at 4pm. This game will be preceded by the Galway v Armagh quarter final which has a 1.45pm throw in.

You can purchase tickets for the games via the link below:
https://www.ticketmaster.ie/event/18005CBEA7F4ADC2

Davitts GAA Senior team and Club would like to thank Bertie Penny for his generous sponsorship of two sets of tops for the Senior men’s squad and management. Although he is based in San Francisco for several years, Bertie is one of our biggest supporters. A former player and a proud Davitts man, he is one of the major figures in San Francisco in promoting gaelic games. Bertie is pictured with the Davitts squad after their league victory over Moy Davitts. Thanks again Bertie…. 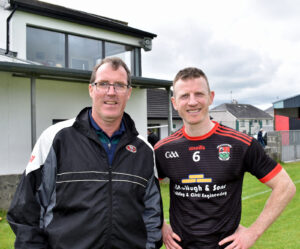 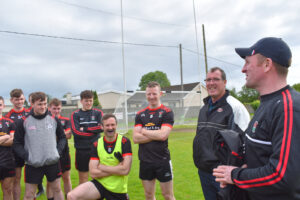 A strong final quarter showing earned Davitts the spoils over a dogged Moy Davitts in this Senior League Div 2B encounter played in Ballindine on Sunday. In truth Davitts had played second fiddle to their North Mayo namesakes for most of the game but they outgunned their opponents by 1-6 to 0-1 in the last fifteen minutes to take two valuable league points.

Moy Davitts played with the assistance of the wind in the first half and after the homeside shot the opening score, a neat Evan Ronane point, Moy Davitts goaled in the 7th minute. Both sets of defences were on top in a very cagey opening quarter. Evan Ronane pointed again in the 17th minute and Moy Davitts added three points to their tally in the next five minutes with Niall Treacy scoring one for Davitts. A Moy Davitts point in the 24th minute was cancelled out by a similar score by Fenton Kelly four minutes later to leave Moy Davitts ahead by 1-4 to 0-4 at half time.

Points by Evan Ronane and Niall Treacy narrowed the deficit to a single point as Davitts started the second half brightly but after the visitors pointed in the 37th minute they capitalised on a defensive error to goal in the 42nd minute to leave the homeside reeling. Moy Davitts extended their lead to six points in the 45th minute as they looked to be cruising to victory. Davitts however had other ideas and two superb Cathal Corless points and a point each from Evan Ronane and Cathal Hennelly narrowed the gap to a point. Moy Davitts pointed in the 55th minute but Fenton Kelly cancelled this out two minutes later. The crucial score came in the 58th minute with Davitts on top and in rampaging form. A long free kick from Jack Ronayne was fielded by the Moy Davitts keeper but he was pressurised by Niall Treacy and Liam Kearns before getting dispossessed by Treacy who shot to the net to put Davitts ahead. Evan Ronane kicked the last point of the game three minutes later as Davitts claimed the two league points.

Davitts were very poor for long periods in this game but Cathal Higgins, Thomas Ronayne and Colm Boyle stood firm in the defence. Cathal Corless and Fenton Kelly were immense, especially in the last fifteen minutes, with Niall Treacy and Evan Ronane both looking dangerous throughout the game. The Davitts subs all made an impact on the game after their introductions.