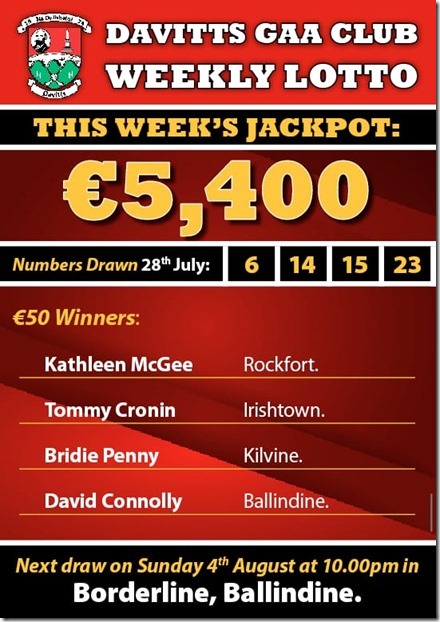 Davitts Seniors took on Parke in Div 3 of the League on Saturday evening in Ballindine and a very strong second half showing saw the homeside win by 1-16 to 1-4.

Wind assisted Davitts shot the opening two points of the first half through Ronan McNamara and Cathal Hennelly but a Parke goal in the tenth minute gave the visitors real hope. Two pointed frees from Parke and one from Ronan McNamara had the visitors ahead by two points before Cathal Hennelly, Liam Kearns and Keith Prendergast combined in the twentieth minute for the latter to hit the back of the net from close range. Davitts added three more points from Evan Ronane (2) and Cathal Hennelly to lead by 1-6 to 1-2 at halftime.

Davitts took control of the match in the second half as they outscored the opposition by 0-10 to 0-2 in that period. Ronan McNamara, Cathal Hennelly (3), Liam Kearns (3), Keith Prendergast (2) and Dmitry Trench shot those second half scores. At the other end of the field Cian Naughton, Patrick Keadin, Cathal Higgins, Brian Clarke, Ciaran Fahy, Dmitry Trench and Liam Macken defended well and restricted the visitors to two pointed frees.

Cathal Hennelly had an outstanding match with Liam Kearns and Keith Prendergast not far behind him. Ronan McNamara as usual led his side superbly while Tommy Waldron, William Freeley, Evan Ronane and Darragh McGale worked tirelessly throughout the game. Davitts used six subs with each of them contributing to an impressive victory. 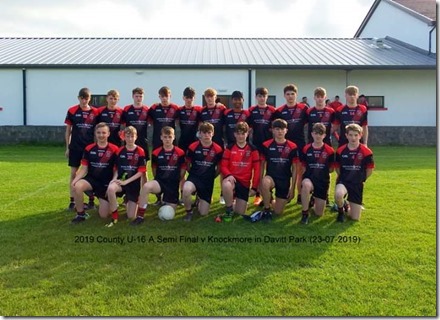 Davitts U-16 team booked their passage to the County A Championship final after defeating Knockmore by two points in the semi-final played in perfect conditions in Ballindine on Tuesday evening. Davitts will meet either Castlebar, Ballina or Moy Davitts in the County Final.

Knockmore started well and had two points on the board in the first three minutes before Jack Devane opened Davitts account with the first of his nine points on the night. Dylan Gallagher equalised in the fifth minute and the outstanding Cathal Corless put the homeside in front with a classy 6th minute point. A seventh minute Knockmore point was cancelled out by Fenton Kelly and Cathal Corless shot another before Knockmore struck for a goal in the 11th minute. The visitors extended their lead to two points with a twelfth minute score. Jack Devane narrowed the gap but Knockmore replied with a point of their own as the match entered the second quarter.

Davitt outscored Knockmore by 0-5 to 0-2 in that second quarter, Cathal Corless shooting three fine points and Jack Devane two, to leave the homeside ahead by 0-11 to 1-7 at the break.

Jack Devane with three points and another from Fenton Kelly saw Davitts extend their lead to five points by the eighth minute of the second half but Knockmore replied with two in the 41st and 43rd minutes. Jack Devane pointed in the 47th minute but Knockmore fired home their second goal with ten minutes remaining to narrow the gap to a single point. Jack Devane shot another excellent point in the 51st minute, the game’s final score as the entire Davitts team defended as if their lives depended on it, for the remaining thirteen minutes, before the final whistle was blown.

This is a fine Davitts group of players and they are a credit to their mentors and the Club. It is some achievement for a small Club to reach an underage A County Final and they deserve massive credit for doing so. They have some top class players and a great attitude and can look forward to their big day out in McHale Park with confidence.

In this game Tristan Diskin was confident in goals and could do little with the two goals that went past him. Micheal Hett, Brian Og McTigue and Thomas Ronayne were superb throughout the game with John Wallace, Brian Birmingham and Sean Keadin completing an excellent defensive sextet. Fenton Kelly (0-2) and the hard working Fionan Gallagher had a tremendous duel with their Knockmore counterparts all through the game. Up front Cathal Corless (0-5) gave a masterclass at centre forward and Jack Devane (0-9) was a constant thorn for the Knockmore backline. Joe Prendergast, Davy Hennessy, Jack Melvin, Dylan Gallagher (0-1) and sub Bon Glynn displayed a massive workrate that was required from everyone, to thwart a gallant Knockmore team. 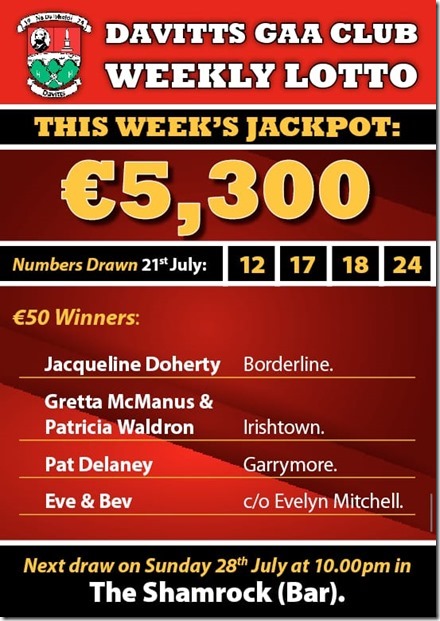 There will be a Mass in the Clubhouse on Friday, July 26th, at 8pm for all deceased members of Davitts GAA Club. This will be followed by the opening of the gym.

All members of the Community are invited to attend…

Your support would be greatly appreciated especially for our U-16 team who play at home against Knockmore in the County A Semi-Final on Tuesday evening at 7pm….

The South Mayo Junior A Final was played in Claremorris on Wednesday evening with Hollymount Carramore and Davitts serving up an entertaining match with the result in doubt right up until referee Martin Kennedy’s final whistle. It was the Hollycarra lads that came out on top by the minimum margin to claim the South title.

Hollycarra started well with points in the first and sixth minutes from Ian Costello and Matt Saunders. They had to wait until the twentieth minute for their next score, a super point from Ian Costello, with Davitts racking up six unanswered points in between courtesy of Tom Corless, Liam Noone (2), Aidan McTigue (2) and wing back Brian Clarke.

The excellent Damian Kelly fired over two points in the 21st and 22nd minutes before Hollycarra captain Dermot Costello pounced on a mistake by Davitts keeper Adrian McNamara to a crucial goal one minute later. Matt Saunders (2) and Ian Costello pointed before the interval to leave Hollycarra ahead, 1-8 to 0-6, at the break.

Davitts shot the opening three points of the second half through Liam Noone (2) and Aidan McTigue in the first six minutes but Damian Kelly replied for Hollycarra in the 38th minute. Points from Ian Costello, Kevin Burke and Matt Saunders stretched Hollycarra’s lead to six points as the game entered the final quarter.

Davitts then came storming back into the game with a goal in the 47th minute after a fine run by Darragh McGale, whose shot was saved by Mickey Moore but the ball deflected off a defender and ended up in the net. Aidan McTigue narrowed the gap to two points a minute later and in the fiftieth minute Liam Noone scored a point with Brian Clarke shooting another in the 53rd minute to level the game.

Davitts missed chances to take the lead and in the 57th minute man of the match Damian Kelly shot over the winning score after a terrific solo run from well inside his own half. Hollycarra used their experience to close out the game and frustrate Davitts in the final minutes to win in a welter of excitement. 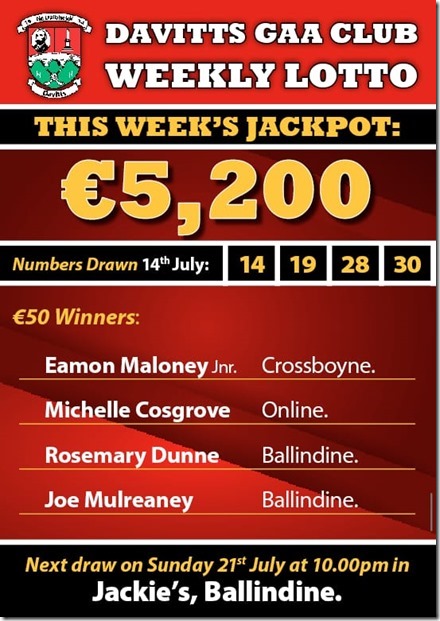 Davitts Senior’s travelled to Knockmore on Tuesday evening for the Leo Kenny Cup semi-final with the locals booking their final spot after an entertaining match. A strong closing twelve minutes of the match, yielding an unanswered 1-4, saw the Knockmore lads clinch victory but they had to pull out all the stops against a very plucky Davitts team.

Knockmore opened the scoring with a sixth minute point with Ronan McNamara equalising from long range in the eighth minute. Knockmore replied with a quickfire goal and a point and after another point in the 12th minute it looked like they would run riot. Davitts however settled down with a Liam Kearns point. A great move involving several players almost resulted in a Davitts goal but Liam Macken’s attempt hit the inside of the post and rebounded into the Knockmore goalie’s arms. The homeside pointed in the 18th minute and Darragh McGale pulled one back for Davitts in the 19th before a super move ended with Brian Clarke supplying the final pass for a Liam Macken goal. Two minutes later Knockmore cancelled that score out with a goal of their own from the penalty spot after Padraig Mangan took down one of their forwards bearing down on goal, earning himself a black card. Ronan McNamara in the 25th and Knockmore in the 26th minutes pointed but four minutes later Keith Prendergast fired home Davitts second goal after a piercing run from Evan Ronane. Liam Kearns narrowed the gap with a point and Knockmore pointed just before the break to go ahead by 3-5 to 2-5 after a helter skelter first half.

Davitts began the second half with a first minute point by Liam Kearns. Knockmore pointed in the third before Liam Kearns levelled the game in the 35th minute, goaling after another slick Davitts attacking move. Knockmore pointed in the 36th and 38th minutes before Ronan McNamara pulled one back for the visitors in the 42nd minute. Davitts wasted a number of scoring opportunities and a 43rd minute point and a 48th minute Knockmore goal put them five points ahead. They added three late points as they advance to play Charlestown in the final.

This was a very hardworking and encouraging display by Davitts against a Knockmore side that were clinical up front.