This week’s Presto Result:
The numbers drawn were 4, 7, 15, 23.
The Jackpot was not won.
The following players won €50 each:
Cora Waldron, Claremorris
Brendan Kilkenny, Ballindine
Rose Cannon, Hollymount
Mary Freeley, Irishtown.
The Jackpot stands at €10,300 for next Sunday night’s draw. 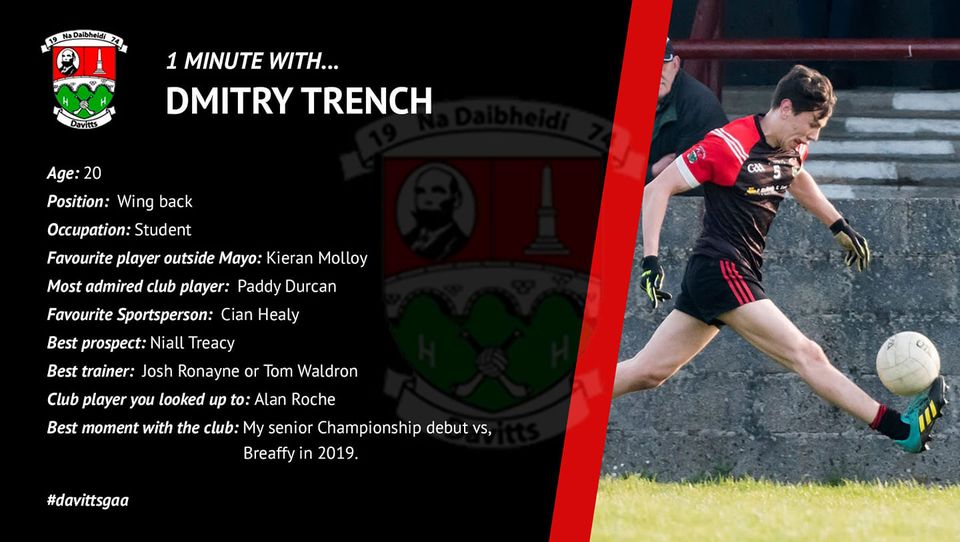 Davitts Minor team produced a top class performance to capture the County B Championship title swatting aside the challenge of Balla in a game played in perfect conditions in Claremorris on Friday evening. Davitts, on top from the start, never allowed Balla to get into the game as they tackled sharply throughout the field, won most of the breaking ball, displayed a fierce workrate and attacked in numbers with great intent.

Dynamic corner forward Niall Treacy opened the scoring in the third minute and Jack Devane cracked home a goal one minute later after an excellent run by midfielder Fenton Kelly. Further points from Niall Treacy (2), Jack Devane, Jack Melvin, Joe Prendergast and Dylan Gallagher put Davitts 1-7 to 0-0 ahead at the first water break. While Balla were winning a fair amount of possession around the middle of the field through the efforts of Odhran O Connor and Shaun Dempsey, they found it extremely tough to get any change out of a superb Davitts defence with all six defenders impressing, none more so than Charlie Phillips at full back.

Two pointed frees from Matthew English in the 22nd and 24th minutes finally got Balla on the scoreboard but a quickfire Davitts scoring blitz two minutes later, scoring 2-1 in a minute, more or less settled the issue.  Dylan Gallagher pointed neatly, then Dylan Gallagher and Niall Treacy combined before the latter’s shot was brilliantly saved by the Balla keeper Matthew Lyons, but Joe Prendergast was on hand to fire home the rebound. From the resulting kick out, Jack Devane won possession and fed Dylan Gallagher who finished to the net with aplomb. Fenton Kelly pointed from a forty five in the final minute of the half to leave Davitts ahead by 3-9 to 0-2 at the break.

Jack Devane and Niall Treacy shot the first two points of the second half to extend Davitts lead before Matthew English pulled one back for Balla in the 36th minute. Iarlaith Golding, coming more into the game scored a fine goal in the 39th minute, fetching Shaun Dempsey’s long delivery and blasting to the net. The same player followed that with a point for Balla before Fenton Kelly pointed for Davitts and Jack Devane finished his second goal after great work by Dylan Gallagher and Niall Treacy in the 44th minute. Matthew English pointed for Balla before the water break to make it 4-12 to 1-5.

The game was fizzling out as Jack Devane pointed in the 47th minute. George Boyd, who had a great battle with Davitts captain Jack Trench all evening, got a fine point for Balla after a searing run in the 53rd minute with Niall Treacy cancelling it out almost immediately. Davitts got their fifth goal in the 59th minute, fittingly Niall Treacy finishing it after Zack Keadin superbly put him through. Iarlaith Golding for Balla and Davitts Jack Melvin swapped points before the referee Paul Lydon blew the final whistle.

All of the Davitts players on view impressed in this game and cases could easily be made for any one of Charlie Phillips, Fenton Kelly, Jack Devane or Niall Treacy to be named man of the match.

Tristan Diskin was a confident goalie with Sean Feerick, Brian Og McTigue, Thomas Ronayne, Fionnan Gallagher and Brian Birmingham superb in defence. Up front team captain Jack Trench led from the front with Joe Prendergast also having a stormer. The three U-16’s on the team, Jack Melvin, Cathal Corless and Dylan Gallagher showed that they are three players of the highest quality, all playing brilliantly. The four subs, Dylan Walsh, Zack Keadin, Bon Glynn and Davy Hennessy all played well when introduced. The other panellists were Gavin Ring, Sean Keadin, Cathal Devane, Mark Birmingham and the injured Micheal Hett.

This week’s Presto Result.
The numbers drawn were 2, 3, 5, 13.
The Jackpot was not won.
The following players won €50 each:
Michael Waldron, Cullane
Patricia Kirrane, Skevard
Martina Waldron, Ballindine
Mary Mangan, Esker.
The Jackpot rises to €10,200 for next Sunday night’s draw.

Davitts Senior team booked their place in the O Mara Cup semi-final when they defeated Shrule Glencorrib by 2-7 to 0-8 in Ballindine on Saturday evening. The conditions were not great but both teams served up an entertaining game nevertheless.

The exchanges were tight in the opening quarter with Davitts playing against the tricky wind. Shrule Glencorrib opened the scoring in the fifth minute but points from Johnno Clarke and Ronan McNamara had Davitts ahead at the first water break. Shrule Glencorrib equalised in the 16th minute but excellent link up play from Cathal Hennelly, Darragh McGale and Stephen Nyland ended with Liam Kearns finishing for a Davitts goal three minutes later. Shrule Glencorrib reacted well scoring three unanswered points before the break to leave the sides level, Davitts 1-2 to Shrule Glencorrib’s 0-5, at halftime.

Cathal Hennelly gave Davitts the lead two minutes into the second period with the visitors equalising in the 9th minute. Davitts then took command and a Liam Kearns point was followed by a scoring blitz from veteran Ronan McNamara who pointed three long range frees and goaled in the 47th minute to effectively settle the issue. Shrule Glencorrib tried their best but could only manage two points before the finish as Davitts used their experience well to see the game out.

Davitts advanced to the County Minor B Championship Final after defeating Cill Chomain in Swinford on Friday evening. The final scoreline suggests a somewhat comfortable victory but this was not the case and it took two goals in the last three minutes for Davitts to finally shake off the gallant North Mayo side.

Davitts got off to a super start with a brilliant individual goal from Niall Treacy in the first minute, a Joe Prendergast point a minute later and a second goal from Jack Melvin in the third minute as they threatened to run riot. Cill Chomain pulled back a point in the 6th minute with Jack Devane cancelling that out a minute later with an excellent score.

A Cill Chomain point in the ninth minute was quickly followed by a fine goal to narrow the deficit to three points.  Niall Treacy extended Davitts lead to four points but two Cill Chomain points left Davitts ahead by 2-3 to 1-4 at the first water break.

Cill Chomain dominated the next ten minutes but poor shooting meant that this was not reflected on the scoreboard. The next score came from Davitts Cathal Corless in the 24th minute. Cill Chomain cancelled that score out immediately. The first half ended with a flurry of scores with Niall Treacy (2), Jack Devane and Fenton Kelly pointing for Davitts in the last five minutes as Cill Chomain just notched the one point to leave Davitts ahead by 2-8 to 1-6 at half time.

Wing back Brian Birmingham opened the second half scoring with a fine point after a sweeping move but Cill Chomain, getting on top in most sectors, hit a purple spell. They pointed in the 2nd minute, scored a goal in the 3rd minute and another point in the 7th minute to narrow the gap to a single point. They missed three or four good opportunities to level the game before Jack Melvin and Niall Treacy had Davitts points in the 10th and 12th minutes. Cill Chomain pointed before the second water break to leave Davitts ahead by 2-11 to 2-9 going into the final quarter.

Cill Chomain reduced the deficit to one point in the 18th minute but Jack Devane and Niall Treacy extended Davitts lead to three points in the next three minutes. A Cill Chomain player had got sin binned in the 20th minute and when their best defender was shown a black card in the 26th minute they were in deep trouble. They did manage a 28th minute point but Davitts killed off their brave challenge with an excellent goal after a sweeping move expertly finished by Dylan Gallagher in the 29th minute. The game’s final score came two minutes later as Niall Treacy netted a penalty after he was fouled, again after a sweeping Davitts move, to give Davitts a rather flattering eight point winning margin.

Davitts will now face Balla, very impressive in their semi-final victory over Aghamore, in the final next week and they will know that a much improved performance will be needed to overcome that challenge.