Davitts U-21 team advanced to the final of the County B Championship following a 1-9 to 1-6 victory over Hollymount Carramore in a semi-final played in extremely difficult conditions in Bekan on Saturday. The gale force wind assisted Davitts in the first half and few, if any, in the attendance would have given them any chance of winning at half time, as they trailed by 1-4 to 0-6 at the break.

Hollymount-Carramore were much the better team in the first half as they bossed the game and were full value for their one point lead at the interval. Their play was controlled but Davitts, who lost their captain Sean Waldron through injury after twenty minutes, kept themselves in the game with points from Evan Ronayne (2), Liam Noone (2), Paul O Gara and Andrew Peters as they recovered from a terrible start.

Holly-Carra were ahead by 1-2 to 0-0 after ten minutes but the Davitts players battled hard to stay in the game. Brian Clarke, Cathal Higgins, Shane Treacy, Paul O Gara and Evan Ronayne were to the fore in what was a very disappointing first half display.

Davitts second half performance was superb. The whole team displayed unbelievable character and they made light of the dreadful conditions. Thomas Waldron, who replaced his namesake Sean, had a terrific game, and he, the lion-hearted Patrick Keadin, Cathal Higgins, Cathal Hennelly, Andrew Peters, Liam Noone, Shane Treacy and Paul O Gara ran at the Holly-Carra defence at every opportunity. Brian Clarke, Padraig Mangan, Micheal Mangan, William Freeley who had a storming final quarter, and Mikey Kelly were defiant as Davitts turned the game around.

The two teams scored two points apiece in the first ten minutes of the second half, Evan Ronayne and Paul O Gara on the mark for Davitts before Andrew Peters swung the game in Davitts favour with a brilliant goal after excellent work by Shane Treacy. Davitts were in command of the game now and Paul O Gara scored the game’s last point as his side advanced to meet Swinford in the final.

Change of Time for U-21 Semi Final

The County U-21 Semi-Final against Hollymount Carramore has been switched to 3.30pm on Saturday (Nov 28th). It still will take place in Bekan. 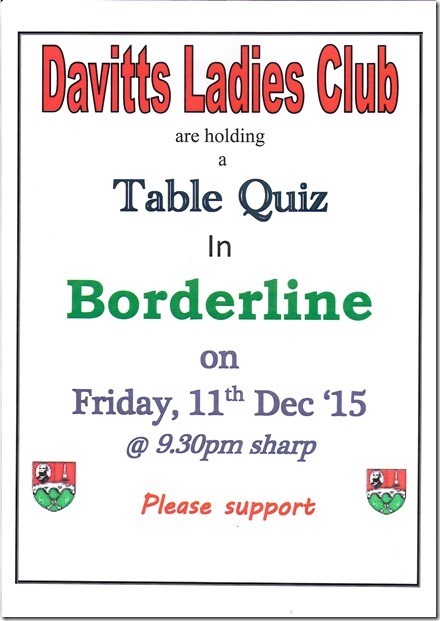 All  fully paid up registered members over 18 have full voting rights at the AGM.

All members are requested to attend.

Davitts and Mayo Gaels clashed in the County U-21 B quarter-final in Bekan on Sunday with Davitts advancing to the semi-final after a battling 3-6 to 2-5 victory.

The rain and a gale force wind did their best to spoil the game but credit to both teams for serving up a very exciting encounter that was in the balance right up to the final whistle.

Davitts, playing with the assistance of that strong wind in the first half, looked in big trouble after ten minutes as they trailed by 1-1 to 0-1. Evan Ronayne had scored the Davitts point but some poor wides allowed the Gaels to take the lead. Davitts rallied well however and Cathal Hennelly goaled to level the game. Points from Liam Noone (2) and the impressive Shane Treacy followed before Paul O Gara, who was having a blinder, goaled to leave Davitts ahead by 2-4 to 1-2 at halftime.

Mayo Gaels tried to get back into the game after the interval but found Brian Clarke and Padraig Mangan in superb form in the Davitts fullback line in front of Micheal Mangan who exuded confidence in goals. All of the Davitts players were tackling as if their lives depended on it. Mayo Gaels got an early point but this was cancelled out by an excellent Evan Ronayne score. Mayo Gaels pointed again but Davitts reply to this score was even better with substitute Conor Keane hammering the ball to the net following excellent work by Paul O Gara. Mayo Gaels pointed again and they converted a penalty with ten minutes remaining to narrow the gap to 3-5 to 2-4. Davitts, now without their injured captain Sean Waldron, had to pull out all the stops. It was backs to the wall stuff in the closing minutes as the Gaels moved to within a goal of Davitts but Thomas Waldron, a very effective second half sub, got a tremendous point after a great run to seal the win. Things got a bit messy in the last few moments with a number of handbags being swung as the game became very stop/start which suited the Davitts lads.

Every Davitts player played their part in this win which, because of the conditions, had as much to do with grit and determination as it had to do with football ability.

Davitts GAA club will hold their Annual General Meeting on Sunday 22nd November at 6pm in The Community Centre Ballindine. Paid up members have full voting rights at the AGM. Purchasers of the club and county draw tickets are recognised as full members. GAA rules state that non members or U18’s do not have voting rights at an AGM. All members are requested to attend. New members welcome!

Davitts were consigned to Division 1B football for next season after a crushing defeat by Kiltane in this Senior League tie on Sunday morning in Ballindine. The victory saved Kiltane from relegation and they produced a powerful second half display to completely overwhelm the home side.

An understrength Davitts side, playing against the wind, got off to the ideal start with a Liam Noone goal in the second minute. Ultan Corrigan with three points for the visitors and a Josh Ronayne point for Davitts had Davitts a point ahead after twelve minutes. Andrew Peters extended Davitts lead with a 15th minute point which was cancelled out by a John Reilly point for Kiltane five minutes later. Josh Ronayne put Davitts two points up a minute later but Kiltane points from Ultan Corrigan (2) and Sean Gaughan saw them take the lead for the first time in the 27th minute. Davitts had a 20 metre free kick to level it as the game went into first half injury time but they played it short, got turned over, and Kiltane strung a six man move together before Tommy Conroy buried their first goal. John Reilly added a point before the half time whistle to leave the visitors ahead by 1-8 to 1-3 at the break.

Josh Ronayne, Liam Noone and Andrew Peters for Davitts and Kiltane’s Ultan Corrigan (2), John Reilly, Sean Gaughan and Shane Lindsay all pointed in the third quarter as Kiltane extended their lead. Two Kiltane goals courtesy of Ultan Corigan and Shane Lindsay completely killed off the game with twelve minutes remaining. They added points from Shane Lindsay (2) and Pat John Gaughan and a goal from sub James Lindsay before the finish with Josh Ronayne and Liam Noone pointing for a dejected Davitts side.

Davitts and Swinford met in the County U-15 Div 3 Final in Kiltimagh on Saturday with Swinford coming out on top, 4-9 to 2-9, after an exciting game.

Davitts started the game well and had raced into a four point lead, 0-5 to 0-1, after twelve minutes with fine points from David Devane (2),Cian Naughton and Stephen Nyland (2). In the fourteenth minute Swinford struck for the first of their four goals. They equalised a minute later but points from Stephen Nyland and Niall Kearns put Davitts into a two point lead before two goals in the 26th and 27th minutes left Swinford ahead by 3-2 to 0-7 at the interval.

Swinford started the second half well and extended their lead to eight points before Cian Naughton opened Davitts second half account with a point in the 11th minute. Swinford replied with a point a minute later before Davitts hit a purple patch. James Ruane goaled in the fourteenth minute after a sweeping move and the same player added another point to narrow the gap to four points before another Davitts goal, finished by Cian Naughton after great work by David Devane and Niall Treacy, left the minimum between the sides with six minutes remaining in the game. Swinford were reeling now but all credit to them for regaining their composure and they scored an unanswered 1-2 before the final whistle to win by six points.