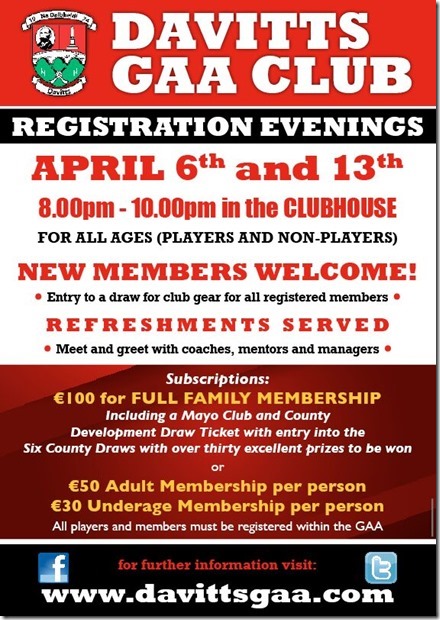 Please not that there is a mandatory membership form that must be completed by all members when they are registering (it takes no more than a minute but it must be done). This is a Croke Park directive and all members, players and non players, must complete the form…

Davitts got their Minor League Div 2A campaign off to a flying start when they defeated Ballintubber by 5-14 to 4-5 in Ballindine on Friday evening.

Ballintubber opened the game brightly and had fired in two goals in the opening three minutes before the homeside began to settle down. With Niall Kearns and Cian Naughton winning the midfield battle, Davitts came storming back into the game. They scored some fine points courtesy of the inspirational Dimitry Trench (2), Niall Treacy, Dean Moran, Cian Naughton, Niall Kearns and Stephen Nyland (2) and two cracking goals from the very impressive David Devane and James Ruane, to lead by 2-8 to 2-1 at the break.

Davitts continued to press on after the break and three further goals from Niall Treacy, Conor Walsh and Stephen Nyland put the result beyond doubt. Ballintubber kept plugging away and were rewarded with two late goals but it was Davitts who ran out the deserving winners. Second half points from Dimitry Trench, Niall Kearns, Niall Treacy and three from Stephen Nyland completed their impressive tally. 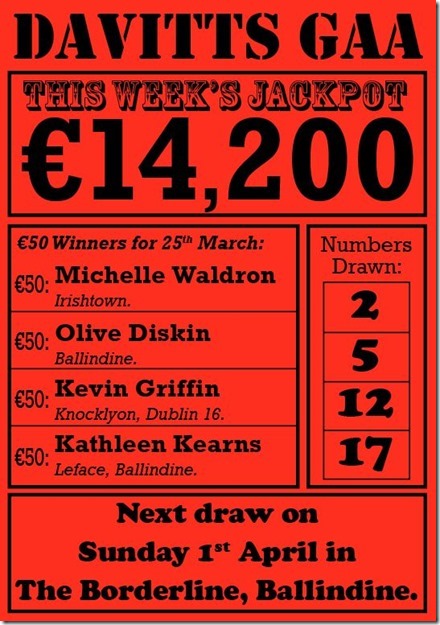 The U-14 Feile B match between Davitts and Parke will be played in KNOCKMORE on Saturday 24th at 12pm. The winners are guaranteed a place in the National Feile Finals which will be held in Louth/Down/Armagh in the Summer.

Please support the lads as they attempt to qualify for the National Finals for a second successive season. 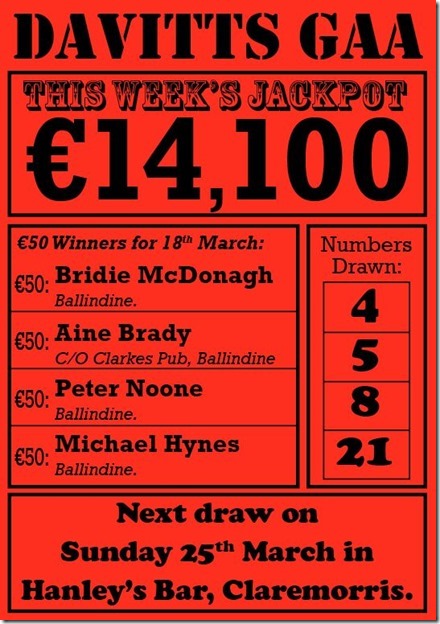 Meeting 8pm this Wednesday 21st March in Davitts to discuss plans for Road works in Ballindine. Everyone should attend to voice any concerns to Mayo Co. Council.

Davitts got their Mayo Senior League Div 2 campaign off to a winning start with a fine four point defeat of Belmullet. The game was played in artic conditions and the gale force wind didn’t help the standard of football but both sides served up an entertaining game nevertheless.

We had to wait until the 18th minute for the game’s first score, a Belmullet point. They added two more in the 25th and 27th minutes and the hard working Davitts players would have been relatively pleased to go in at the break trailing by just three points after playing into the vicious wind.

Ronan McNamara opened Davitts account with a trademark long range free in the 6th minute of the second half but the homeside responded well and extended their lead to four with points in the 12th and 14th minutes. Davitts didn’t panic and Cathal Hennelly got his first goal in the 15th minute after fetching Ronan McNamara’s long delivery and finishing well. Josh Ronayne pointed from distance to equalize the match in the 19th minute and Cathal Hennelly pounced for his second goal a minute later to put his side in the driving seat.

Belmullet fought hard to get back into the game but the Davitts defence stood firm. Josh Ronayne and Evan Ronane pointed in the closing minutes while Belmullet shot the last score of the game deep in injury time. 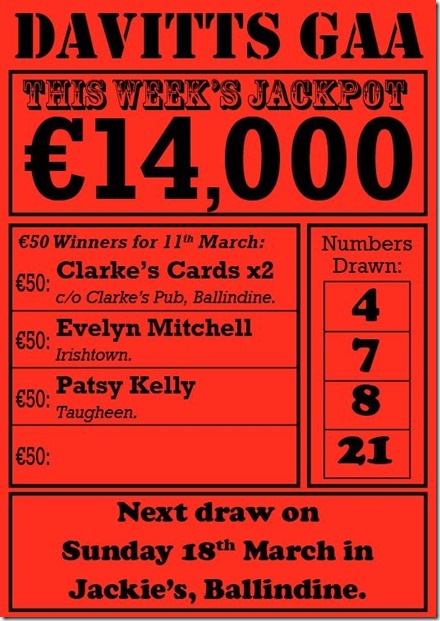 Belmullet v Davitts in Belmullet at 11am.