This week’s Presto result.
The numbers drawn were 12, 15, 20, 22.
Four people matched three numbers but the Jackpot was not won.
The following won €50 each:
Vanessa McHugh, Killeen
Aine Gilmore, Tuam
Michael Duggan, Ballindine
Cathy Freeley, Irishtown.
There will be a Jackpot of €16,500 in next Sunday night’s draw.

Use the link below to play online:

This week’s Presto result.
The numbers drawn were 2, 16, 26, 36.
Four players matched three numbers but the Jackpot was not won.
The following won €50 each:
Tom Heneghan, Irishtown (online)
Brian Corr, Burrish (online)
Ashling Conneely Basham, Burrish (online)
James Flynn, UK (online).
There will be a Jackpot of €16,400 next Sunday night.

Use the link below to play online: 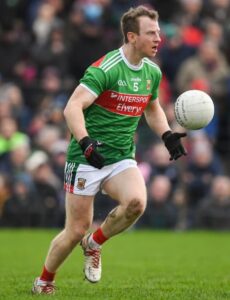 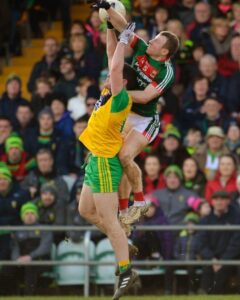 Enjoy your retirement from the inter county scene Colm. What a magnificent career he has had representing Mayo, with over 120 appearances, 6 Connacht Senior titles, 1 National League and 4 All-Stars. One of the most admired and respected players in the country. He brought so much pride to Davitts Club with his wholehearted performances for the county. Colm can now fully concentrate on playing for Davitts. Legend!

This week’s Presto result.
The numbers drawn were 2, 9, 15, 22.
The Jackpot was not won.
The following won €50 each:
Bertie Penny, San Francisco (online)
Laura Waldron, Irishtown
Brian Hunt
Derek Byrne, Esker (online).
The Jackpot is at a massive €16,300 in next Sunday night’s draw.
Use the link below to play online:

Davitts and Claremorris Juniors clashed on Saturday in a championship relegation play-off in Claremorris with the home side prevailing after extra time. The sides had ended level after normal time, thanks to a storming last quarter display from a gallant Davitts side, but Claremorris shot three unanswered points in extra time to see them through.

Claremorris looked the stronger team from the off and had built up a 1-8 to 0-4 lead at halftime. Davitts first half marksmen were Club secretary John Costello, Danny Corless, Shane Treacy and Fenton Kelly. Claremorris extended their advantage in the third quarter shooting six points to Davitts two supplied by Shane Treacy and Fenton Kelly. This margin would certainly have been greater were it not for some super goalkeeping from David Mitchell and staunch defending from Lar Daly, Jordan Flanagan and Brian Og McTigue.

Whatever the management team said at the second water break seemed to completely transform Davitts. The team came alive in the final quarter with midfielders Fenton Kelly and Johnno Clarke now in full flight and dominating the midfield exchanges. Claremorris were unable to cope with the strong running of those two players, Tom Corless, Thomas Ronayne and Shane Treacy. Fenton Kelly and Shane Treacy pointed immediately after the resumption and Ryan McLoughlin goaled a minute later and although Davitts were still six points behind the momentum had completely shifted. Tom Corless and Shane Treacy narrowed the gap to four points and a fine John Kilkenny goal left the minimum between the teams before Shane Treacy equalised. Davitts just couldn’t get their heads in front though before ref Brian Tuffy blew for full time.

Claremorris were able to introduce fresh players but Davitts had only the one sub to call on (the manager) and Claremorris controlled the extra time as the light faded rapidly. Claremorris shot three points in extra time while Davitts failed to add to their tally as they completely ran out of juice.

This week’s Presto result.
The numbers drawn were 2, 5, 9, 21.
The Jackpot was not won. The following won €50 each:
Mary Joyce, Claremorris
Mick Roche, Irishtown
Liam Connolly, Ballindine (online)
Gemma Flannery, Carracastle (online).
There will be a Jackpot of €16,200 in next Sunday night’s draw.
Use the link below to play online: 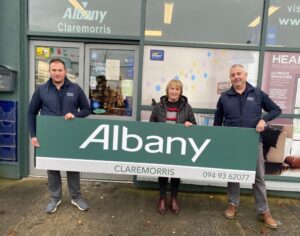 A big thank you to Albany, Claremorris for their sponsorship. Picured with their advertising sign are David Connor and Walter Doherty of Albany and Davitts Committee member Lucy Daly.

The Annual General Meeting of Davitts GAA Club will take place on Friday November 26th in the Clubhouse at 7pm. All are welcome to attend…

This week’s Presto result.
The numbers drawn were 1, 18, 26, 27.
Two players matched three numbers but the Jackpot was not won.
The following won €50 each:
Sarah K McGale, Claremorris (online)
Maureen Nyland, Ballindine
Niamh Huane, Irishtown
Charleen McTigue, Gortskehi.
There will be a Jackpot of €16,100 in next Sunday night’s draw
Use the following link to play online: