The latest Presto results for the 24th November 2019. 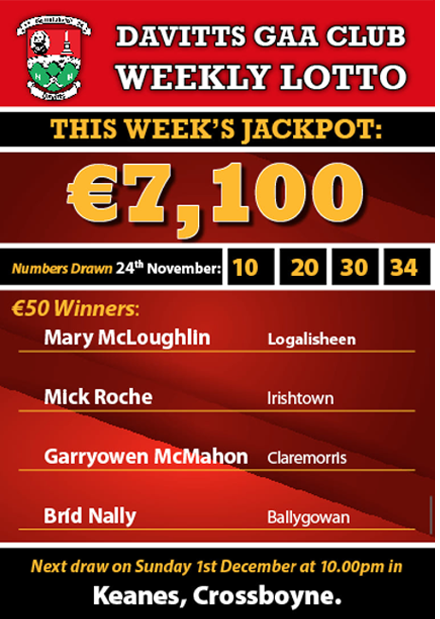 Davitts captured the South Mayo Minor B title in Cong on Sunday when they edged out the narrowest of victories over Ballinrobe in front of a large attendance. It was a game that was in the balance right up to the final whistle and both sides and their management teams deserve great credit for the quality of the football on show in mid November. It would be wrong not to thank The Neale Club too for the use of their pitch which was in excellent condition considering the recent weather.

Jack Devane opened the scoring for Davitts in the third minute. After a spell of shadow boxing, Ballinrobe sprung into life and scored points in the 11th and 14th minutes, sandwiching a 12thminute goal, to go into a four point lead. Davitts were reeling but they replied with a terrific goal in the 18th minute with their impressive goalkeeper Joe Prendergast finding Zack Keadin who spun his man and went on a defence splitting run before offloading to Niall Treacy, who finished with aplomb. Zack Keadin landed a point in the 22nd minute to level the game. Ballinrobe pointed in the 24th minute but five points from Davitts in the final six minutes of the half via Cathal Corless, Stephen Nyland, Niall Treacy (2) and Jack Devane, with Ballinrobe replying with one of their own, left Davitts ahead by 1-7 to 1-4 at half time.

Niall Treacy opened the second half scoring in the second minute but a brace of Ballinrobe points in the next three minutes narrowed the gap to two points. Ballinrobe were flying at this stage and a combination of excellent defending and a few top class saves from Joe Prendergast kept Davitts ahead until the 44th minute when Ballinrobe goaled after some great approach work. They added a point a minute later and now Davitts found themselves two points behind.

Davitts midfielder Fenton Kelly pulled one back for Davitts in the 47th minute but Ballinrobe replied to that score with a point of their own in the 50th minute. The game’s crucial score came in the 53rd minute. Fenton Kelly hit a long diagonal delivery which was won by team captain Stephen Nyland in the left corner who shrugged off his man before beating three defenders and slotting the ball to the net. This was the game’s final score with Davitts withstanding some late Ballinrobe pressure to take the title.

Davitts GAA Club are delighted to announce they received a Healthy Club Award last month! Pictured in Croke Park to mark this occasion were committee members Shane Halligan and Catherine Sweeney alongside members of Castlebar Mitchells and Breaffy GAA Clubs who also achieved their Healthy Club Award. Well done to all club and community members who contributed to Davitts Healthy Club Project. 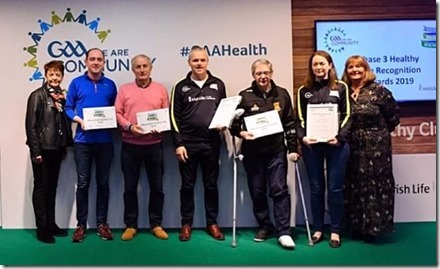 The latest Presto results for the 17th November 2019. 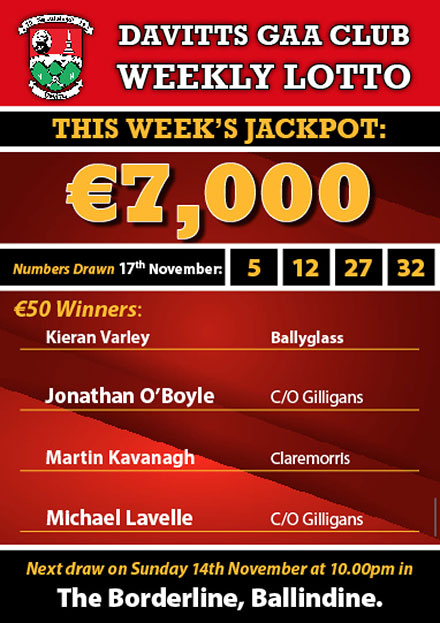 Davitts participation in the Mayo U-21 C Championship was ended in Ballinrobe on Sunday when they were defeated, 2-15 to 1-10 by the locals. A classic game of two halves with Davitts overcoming a shaky start to lead by 1-8 to 0-4 at the break but succumbing to a powerful second half display by a Ballinrobe side that could prove hard to beat in the knockout stages of this competition, based on the last half hour of this game.

Stephen Nyland opened the scoring with a second minute point for Davitts but Ballinrobe reeled off three unanswered points in the next five minutes before Davitts took control. Davitts fired over three points from Evan Ronane and Jack Ronayne before Stephen Nyland goaled in the 15th minute after a great move. Two more Jack Ronayne points and one from Ryan McLoughlin extended Davitts lead to seven points before a Ballinrobe point and one in injury time from Evan Ronane had Davitts looking good at the interval.

Ballinrobe came out completely rejuvenated for the second half. They began to get on top in all areas and shot seven points without reply in the third quarter, before goals in the 46th and 48th minutes completely killed off the Davitts challenge. Davitts tried hard but points from Evan Ronane and Daniel Huane were all they could manage before the final whistle while the home side tagged on a further three.

The latest Presto results for the 10th November 2019. 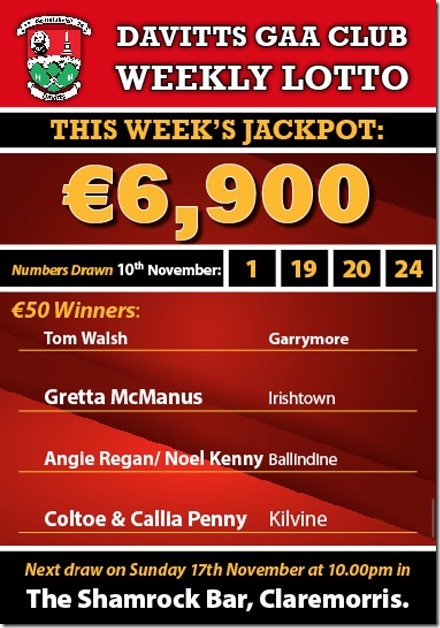 Davitts GAA Club AGM will take place on Saturday November 30th at 6pm in the Clubhouse. All are welcome. 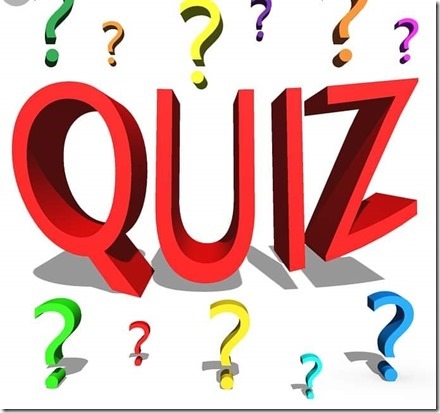 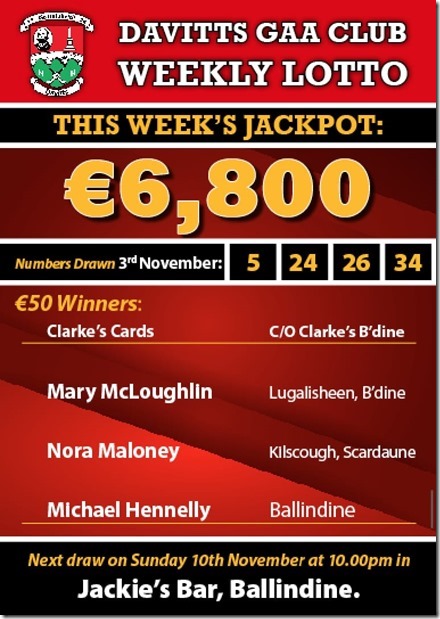 Davitts met Ballyhaunis in the U-21 C Championship on Sunday in Ballindine and after a very good match it was Ballyhaunis that took the spoils, winning by 2-13 to 2-10. Davitts, minus the services of Daniel Huane, lost midfielder unfortunate Cian Naughton in the third minute of the game to a hamstring injury.

Ballyhaunis looked set to inflict a heavy defeat on their hosts after a blistering start that saw them ahead by 1-5 to 0-0 after eighteen minutes of play. Ballyhaunis looked very dangerous and their attack was razor sharp in this period. Davitts then got the fillip they needed, a goal right out of the top drawer courtesy of young midfielder Stephen Nyland. He fielded Dean Moran’s kickout on his own 45 metre line, out on the left wing and went on a terrific solo run, ending with a 25 metre screamer into the top corner of the net.

Stephen Nyland and Jack Ronayne added pointed frees in the next seven minutes but these were cancelled out by a Ballyhaunis brace in the 26th and 28th minutes. Davitts goal machine Ryan McLoughlin netted his side’s second goal on the stroke of halftime, flicking home Jack Ronayne’s long delivery to leave Ballyhaunis ahead at the break by 1-7 to 2-2.

Points from Jack Ronayne and Evan Ronane had the home side level in the 33rd minute but the sending off of Liam Macken in the 36th minute on a second yellow card temporarily stopped Davitts increasing momentum. A Ballyhaunis point a minute later was immediately cancelled out by Evan Ronane. A dubious free awarded to Ballyhaunis was duly converted to give them the lead again but Davitts, well on top, levelled through Evan Ronane in the 41st minute.

Ballyhaunis took the lead again with a point from play after the ref overruled an umpire on a wide ball but Evan Ronane again equalised with a terrific point from way out. A Jack Ronayne free put Davitts ahead for the first time in the 49th minute. Two minutes later Ballyhaunis equalised from a free. In the fifty third minute Ballyhaunis had a man sent off and a minute later Aidan Macken pointed to put Davitts ahead again. Ballyhaunis pointed a free to level it and they goaled in the 57th minute after some sloppy defending by the home side. Another point put the visitors four ahead with the game gone into stoppage time. Davitts threw the kitchen sink at Ballyhaunis but their defence held firm as a Jack Ronayne point from a placed ball was Davitts only reward before the final whistle.

Davitts played some great football for three quarters of this game but the poor start left them with a mountain to climb. Dean Moran had another solid game in goals. Corner backs Tom Corless and Ciaran Fahy stormed into the game after a shaky start. Dimitry Trench had a great game at centre back and his driving runs were inspirational, with Liam Macken and Jordan Flanagan impressing on the wings. Stephen Nyland (1-1) and Niall Kearns formed an effective midfield pairing after Cian Naughton’s early withdrawl.

Jack Ronayne (0-4) led the attack well at centre half forward with Aidan Macken (0-1) and Niall Treacy working exceptionally as wing forwards. Inside, Ryan McLoughlin (1-0) and Evan Ronane (0-4) were in superb form. Zack Keadin and James Ruane were two late substitutions.

Davitts will play Ballinrobe away on Sunday needing a win to be in with a chance of advancing to the County semi-final.