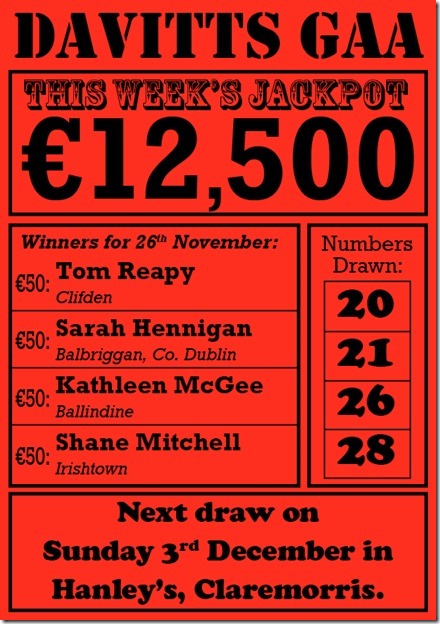 A superbly committed Davitts U-21 Team qualified for the County B Semi-Final after a fine 1-12 to 0-6 victory over Burrishoole in Bekan on Saturday. The game was much closer than the scoreline suggests but the Davitts defence, superbly marshalled by team captain Micheal Mangan, were in outstanding form from start to finish.

The game took its toll however as Davitts very effective midfielder Padraig Mangan suffered what looks like a serious knee injury and he now joins his Senior team colleagues Kieran Fahy and Jack Ronayne on the sidelines for the remainder of this competition.

Burrishoole replied with two points but man of the match Shane Treacy, Conor Keane and Evan Ronane all pointed before the end to put Davitts into the Semi-Final, against an impressive Ardnaree side next Sunday.

Mikey Kelly was very solid in goals and in front of him Patrick Keadin and Michael Waldron displayed tremendous commitment and appetite for work.. Dimitry Trench, Micheal Mangan and Tom Corless completed an outstanding defensive quintet. Cathal Hennelly and Padraig Mangan, until his retiral late in the first half, were in top form at midfield.

Shane Treacy, Ryan McLoughlin and Michael McGarry were excellent in the half forward line while Conor Keane and Evan Ronane were a handful throughout. 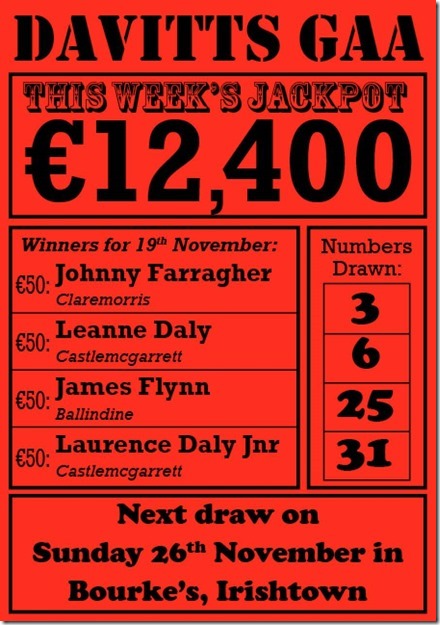 After the slip-up against Hollymount Carramore the previous Sunday, a determined Davitts U-21 team travelled to Swinford on Sunday knowing that a win would secure a quarter final berth and they came through in the end by 2-17 to 2-6. The win means that Davitts have topped their group and now play Burrishoole on Saturday evening in Bekan.

Davitts led by 0-8 to 1-1 at half time with Evan Ronane (4), Conor Keane (3) and Michael McGarry on target. Padraig Mangan and Cathal Hennelly were doing very well at midfield and Davitts were winning most of the breaking ball but goalie Mikey Kelly pulled off two excellent saves to deprive Swinford of what looked like two certain goals which could have made a big difference to the outcome of the game.

Swinford got off to a flyer in the second half and shot 1-2 in the opening five minutes to take the lead. Davitts responded well with points from Michael McGarry, Conor Keane and Evan Ronane before Ronane struck a superb goal after a sweeping move involving Dimitry Trench, Daniel Huane and Shane Treacy.

Swinford lost a midfielder to a second yellow card shortly afterwards and this certainly made Davitts run-in much easier. Further points followed courtesy of Tom Corless, the deadly Conor Keane (3), Evan Ronane and Daniel Huane before Michael McGarry finished off another fine move with an impressive finish to the Swinford net.

Davitts, while delighted with the performance, will know that they will have to cut out the lapses in concentration as the competition progresses.

It was another good all round performance however with Mikey Kelly, Patrick Keadin, Dimitry Trench, Tom Corless, Michael McGarry, Conor Keane and Evan Ronane excelling.

County U-21 B Championship Quarter-Final:

Davitts and Hollymount Carramore met in the second round of the County U-21 B Championship in Ballindine on Sunday with the visitors coming out on top, 4-8 to 2-8, after a great battle. The result was in balance right up to the end but it makes for a very exciting third round of games as each team in the group have two points. Davitts play away to Swinford next Sunday at 12pm while Hollymount Carramore host Ballaghaderreen with the winners of those games advancing to the Quarter-Finals.

Wind assisted Davitts got off to a flyer with three points from Evan Ronane and a goal from the penalty spot by Michael McGarry in the opening eight minutes. Holly Carra hit back with a goal and a point as the game became very competitive. Some wasteful shooting by Davitts wasn’t helping their cause but a cracking Shane Treacy goal and two tidy Evan Ronane points left Davitts ahead by 2-5 to 1-4 at halftime.

Holly Carra goaled early in the second half to narrow the gap to a point but when they got their third goal with six minutes remaining in the game they took the lead, 3-7 to 2-8. As the game entered injury time Davitts had a great chance to goal themselves when Shane Treacy’s defence splitting run ended with a last gasp interception by Holly Carra defender. His side transferred the ball quickly downfield culminating in a great goal of their own to seal the game. They added a point immediately afterwards to give them a slightly flattering six point victory. 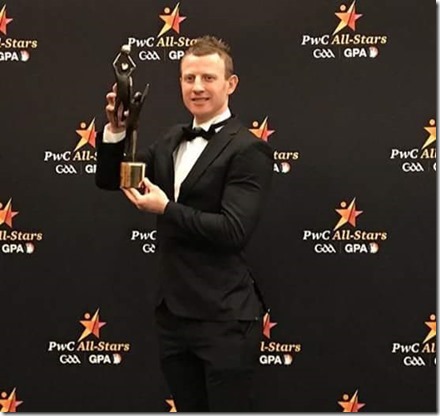 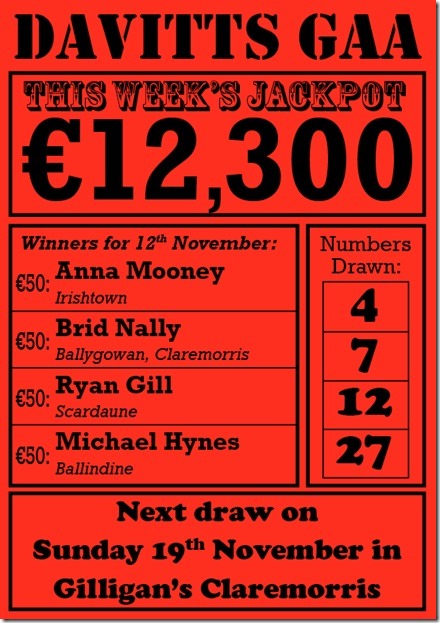 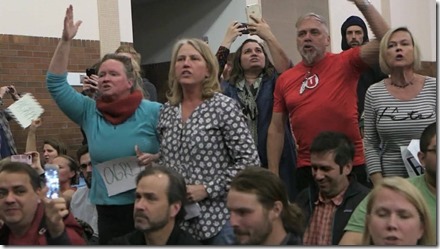 Davitts GAA Club’s AGM will take place on Sunday December 3rd at 7.30pm in the Clubhouse. All are welcome to attend…