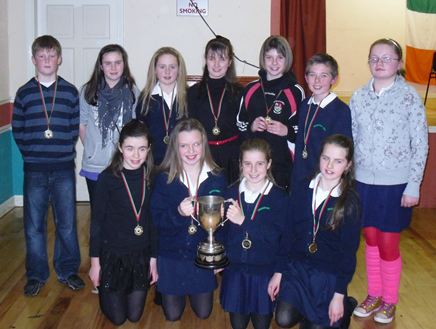 Congratulations to the members of Davitts GAA who won the Best Overall Club Award at the South Mayo Final of Scór na nÓg 2010 / 2011 held in Hollymount on 13th November. Davitts will be represented in the Novelty Act and Recitation competitions at the County Mayo final of Scór na nÓg in Breaffy GAA Clubhouse on 27th November at 3:00pm.

Davitts junior team put up a spirited display when going down by 3-14 to 2-9 against The Neale in the South Mayo junior B semi-final, in an entertaining game played in Ballindine on Sunday. Davitts, minus the services of star forward Pat Hopkins, struggled to come to grips with the physically stronger Neale side, who had the greater threat up front. Davits trailed by 2-7 to 0-3 at half time but stuck to their task in the second half and fought bravely right up to the final whistle.

Controversial team manager John A Noone was very proud of his young team, and many of these players will play a big part in the future of the club. Davitts had super performances from Dave Mitchell, Mark Ronayne (0-1), the energetic Luke Ronayne, Michael Waldron (0-1), JP Kirrane and the lionhearted John Costello in defence. Midfielders John Heneghan and Tommy Mitchell battled throughout. The tireless David Cosgrove (0-5) and Kieran Mooney (2-1) were in terrific form up front, well supported by veteran team captain Mark Diskin, Colm Roche and the talented Con Penny (0-1).

Noone emptied his bench in a vain attempt to rescue this game and John Paul Clarke, Dara Halligan, Tommy Heneghan and Tommy Clarke all tried very hard for the home team.

Davitts u–15 team were heavily defeated by neighbours Carras in the County Div 2 League final in Claremorris on Sunday. The final scoreline of 3-13 to 0-4 fairly reflects the dominance of the Carras team, in a game played in difficult conditions, and not helped by an extremely whistle happy referee who made sure that the game never flowed and, in all fairness, who spoiled the game for the large, and predominantly Davitts attendance. Two well converted first half penalties gave Carras the halftime advantage of 2-4 to 0-3, having the assistance of the tricky wind, but Carras completely dominated the second half and ran out convincing winners.

Davitts will wonder just what went wrong as they had defeated the same opposition by five points a few weeks ago, but this really was a day when anything that could go wrong did go badly wrong. The loss of the injured Matthew Trench, man of the match when the sides last met, was a big blow to Davitts who had excellent battling performances from Michael Mangan, William Freeley, John Huane, Donie Ronayne, Liam Noone, Tommy Waldron and Jonathon Fahy, and these group of players are going to bring lots of success to the club in the coming years. A big thank you to the supporters who turned out in such large numbers on a miserable day.

Please note that the U-15 Division 2 County Final against Carras has been re-fixed for this Sunday (07th Nov) at 2pm in Claremorris. Your support will be greatly appreciated to cheer on this very talented panel of young footballers. Good luck to the boys and their mentors.