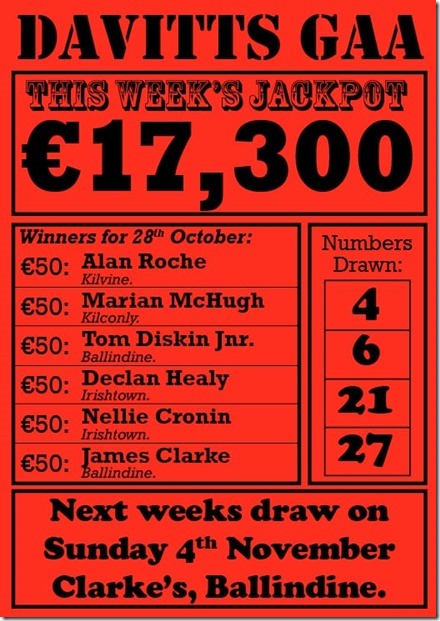 Davitts U-13’s captured the County Div 3 League title with a fine 5-11 to 0-11 victory over Eastern Gaels in Ballindine on Saturday.

Davitts made full use of the wind in the first half and built up a 3-8 to 0-1 halftime lead. The goal scorers were Conor McDermott who bagged two and team captain, Dylan Gallagher.

Eastern Gaels battled hard in the second half but two further goals from Mark Bermingham and Dylan Gallagher ensured that Davitts remained comfortable.

Goalkeeper Dylan O Brien has had a brilliant season and another clean sheet to his name was no surprise. In front of him, corner backs Conor Feerick and Mark Bermingham defended tenaciously throughout the game.

Ethan Boyle at centre half back led the defence well and was very well supported by his wing men Sean Meehan and Brian Hett.

Up front Ronan Kelly, Conor McDermott and Finn McLoughlin worked tirelessly on the half forward line as did corner forwards Fionn McTigue and Harry Fallon. 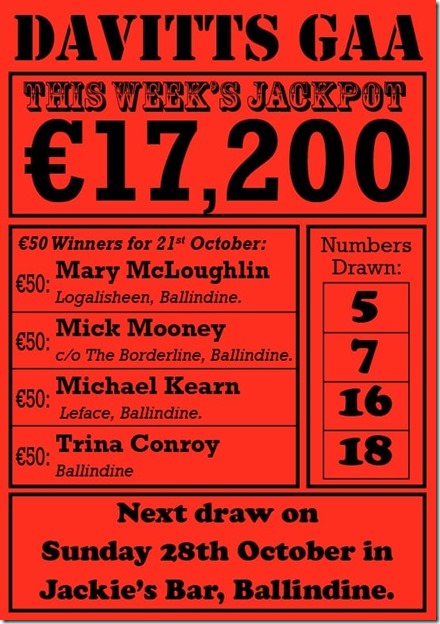 Davitts U-21 team were defeated by a strong Charlestown outfit, 3-12 to 1-9, in the opening round of the County B Championship in Ballindine on Sunday.

An early 1-2 fro the visitors had Davitts chasing the game and by the interval Charlestown had built up a commanding 2-8 to 0-4 lead.

Charlestown look like a team that could take some stopping in this competition but Davitts improved second half display will give them encouragement for their crunch game against Breaffy in this group.

Davitts U-15 team qualified for the County League Div 2 Final with a big 7-12 to 2-5 victory over Burrishoole in Ballindine on Sunday morning.

Davitts got off to a flying start shooting 2-2 in the opening ten minutes with Davey Hennessy (1-1) and Jack Devane (1-1) the marksmen. A third goal from the lethal Davey Hennessy and points from Dylan Gallagher (2), Joe Prendergast and Hennessy had the home side ahead by 3-6 to 0-2 at halftime.

Burrishoole fought gallantly throughout the game but further goals from Jack Devane, Fionan Gallagher, Fentan Kelly and Jack Melvin put Davitts out of sight and into the final. 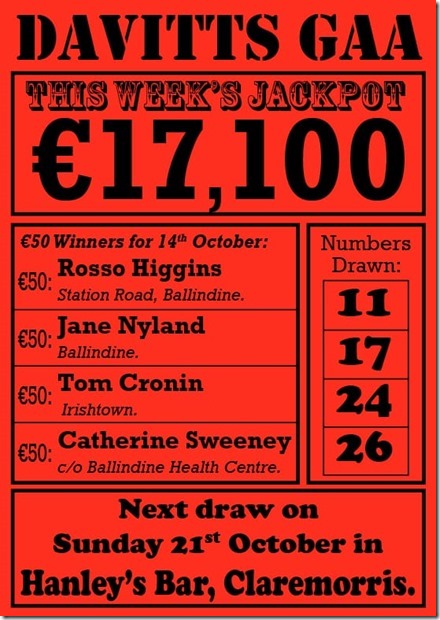 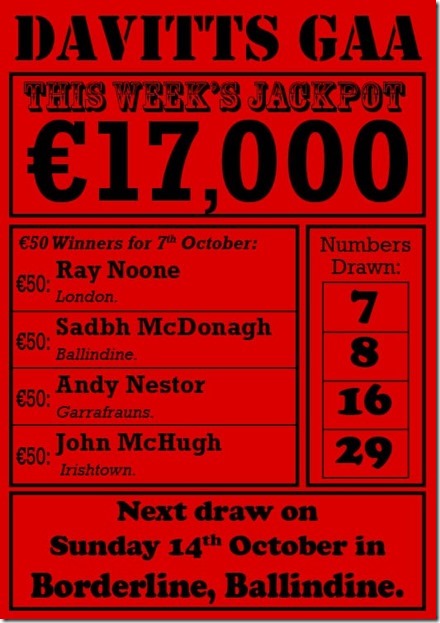 Sunday Oct 14th, U-15 League Div 2A: Davitts v Ballaghaderreen in Ballindine at 11am.

Sunday Oct 14th, U-21 B Championship: Breaffy v Davitts in Breaffy at 1pm.

Davitts Junior’s finished their season off on Sunday in Garrymore, going down by 1-7 to 0-7 to the League winners Swinford. The game was played in Garrymore due to the unavailability of the pitch in Ballindine. (Thanks to our neighbours for the use of their facilities).

Swinford were defending a 100% win record in the league but the Davitts lads put up a great battle and the result was in doubt right up to the final whistle.

Swinford had the assistance of a strong wind in the opening half and led by 1-3 to 0-4 at half time with Davitts points coming from Richie Kilkenny, Tommy Clarke and a brace from Liam Noone. Swinford upped the ante in the second half, playing a strong running game, and they finished the game out well. Liam Noone shot all three of the Davitts second half points.

An unfortunate clash with one of his own players near the end of the game saw Davitts superb young goalkeeper Cian Naughton leave the field with a serious head injury and all in the club wish Cian a speedy recovery.