Davitts U-14 team got their County Div 3A League campaign off to a winning start with a resounding 8-21 to 1-5 victory over Hollymount Carramore in Ballindine on Thursday. Most of the damage was done in the first half that saw Davitts leading by 6-14 to 0-2 at the break with powerful performances throughout the field.

The visitors performed much better in the second half but there was no catching the impressive Davitts lads on this occasion.

Tristan Diskin and Davey Hennessy shared the goalkeeping duties and both performed well. Ian Prendergast, Micheal Hett and Fionan Gallagher formed a solid full back line while outside them Cathal Corless (0-2), Thomas Ronayne and Brian Og McTigue (1-0) defended superbly. Fentan Kelly (1-4) and John Wallace (1-0) formed a strong midfield partnership. Up front the attack was led superbly by Jack Devane (1-5) with Joe Prendergast (1-3), Jack Melvin (0-3), Bon Glynn (0-1), Brian Bermingham (2-0) and Brian Eagney (1-1) all in top form on an evening when everything went right for Davitts. Ryan Rattigan, Cathal Devane (0-1), Jamie Raftery, Brian Hett and Fionn McLoughlin all played well when they were introduced over the course of the game.

It’s that time of the year again Davitts people!
Mayo County Board, in conjunction with the Clubs are again running the sale of €100 tickets. When we reach our quota we can keep €90 from every ticket sold above the quota. Our quota is 65 tickets and with your help we aim to sell well in excess of this amount.
The money raised helps pay towards the running of the Club. Some of the outgoings of the Club includes:
County Board levies and referees; €11,500.
Transport for teams; €6,500.
Registration of teams; €3,650.
Loan Repayments; €12,000.
Davitts GAA offer full family Membership to the purchasers of the tickets as well as the chance to win lots of lucrative cash prizes.
The first draw (of six) is taking place in May. We were fortunate enough to have plenty of winners in the last few years and hopefully our Club members will be lucky again in 2017.
The County Board have set up a facility whereby tickets can be bought online from the mayogaa.ie website. If you purchase in this manner please remember to pick Davitts as your Club.
Tickets are available from any Committee member…. 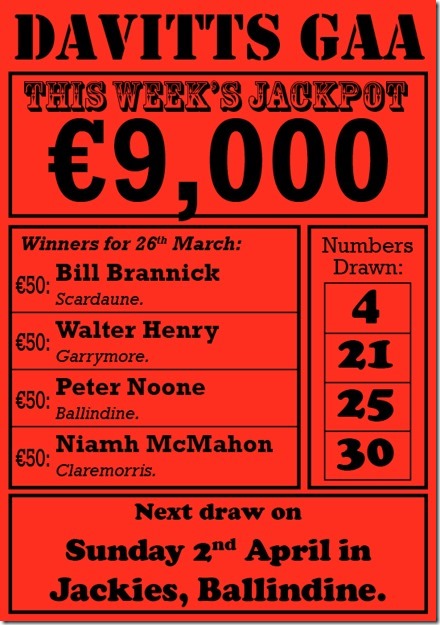 U-16 League Div 4, Davitts v Ballinrobe in Ballindine at 11am.

Davitts U-16 team had their first outing in Division 4 of the County League in Bonniconlon on Sunday and were defeated 4-12 to 2-12 by the homeside. Davitts started slowly and trailed by 3-7 to 0-4 at halftime. Bonniconlon extended their lead when adding the opening two points of the second half before Davitts came storming back into the game. They outscored their hosts by 2-8 to 1-3 in the last twenty five minutes which should give the team confidence going into their second game, a home tie against Ballinrobe next Sunday. 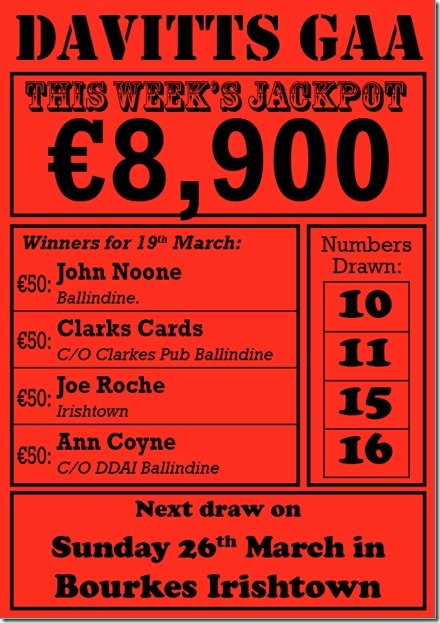 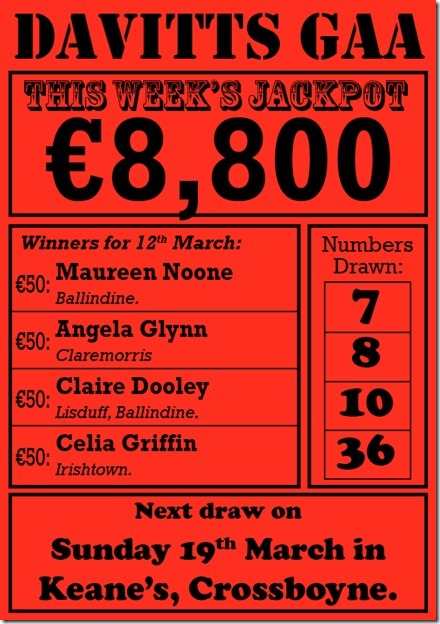 Davitts hosted Kiltane in the Michael Walsh Senior League and were defeated by 4-15 to 2-12 after an entertaining game played in difficult conditions on Sunday. The game marked the return of Davitts forward Michael Conroy after a long absence due to injuries, and he showed up well while getting some much needed game time.

Kiltane played with the wind in the opening half and built up a 2-10 to 0-4 lead at the break with their forwards looking very sharp. Liam Kearns (2), Michael Conroy and Paul Carey were on target for Davitts.

Davitts started the second half well with a Keith Prendergast goal and points from sub Shane Treacy and Liam Kearns in the opening three minutes. A Kiltane goal in the 4th minute extended their lead but Davitts fought hard and were awarded a penalty which Liam Kearns converted. Kearns added two more points and Shane Treacy, Thomas Waldron, Ronan McNamara and Aidan McTigue all pointed before the finish but Kiltane were full value for their win and they advance to the quarter final.

Please support the South Mayo GAA Table Quiz in aid of St. Colmans College and Ballinrobe Community School as they bid to book their places in the All-Ireland Senior A and B finals. The quiz takes place in the Dalton Inn Hotel, Claremorris on Wednesday night (March 15th) at 9pm. Tables of four €40.