An under strength Davitts Senior team travelled to Ballina on Sunday and were defeated by the locals by six points in the Michael Walsh Senior League.

Some wayward shooting didn’t help Davitts cause in the first half and Ballina raced into a five point lead before Liam Noone and the very impressive Andrew Peters pointed for Davitts. Ballina added another point before the break to lead by 0-6 to 0-2 at halftime.

Points from Liam Noone (2) and Ronan McNamara narrowed the gap to the minimum as Davitts enjoyed a purple patch early in the second half. Ballina responded well though and shot six unanswered points before Patrick Keadin kicked the last point of the game. 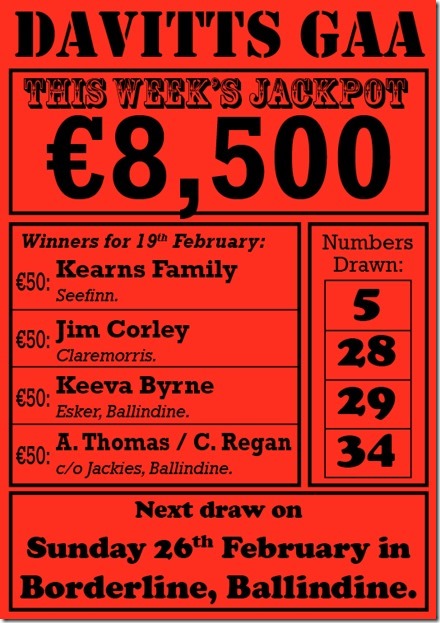 Davitts Seniors got their 2017 campaign underway on Sunday in Ballindine when they were defeated by last year’s County finalists Knockmore in the Michael Walsh League. Knockmore were the sharper looking side early on and two opportunist goals helped them to a 2-2 to 0-4 lead at halftime. Andrew Peters and Liam Kearns (3) got Davitts first half scores.

Knockmore extended their lead to seven points by the fifteenth minute of the second half but Davitts came storming back in the final quarter of the game. Points by Liam Kearns (2), Paul Carey (2) and Andrew Peters left a goal between the sides with the game entering injury time. Davitts did create some goal chances but Knockmore defended stoutly to take two hard earned league points back to North Mayo. 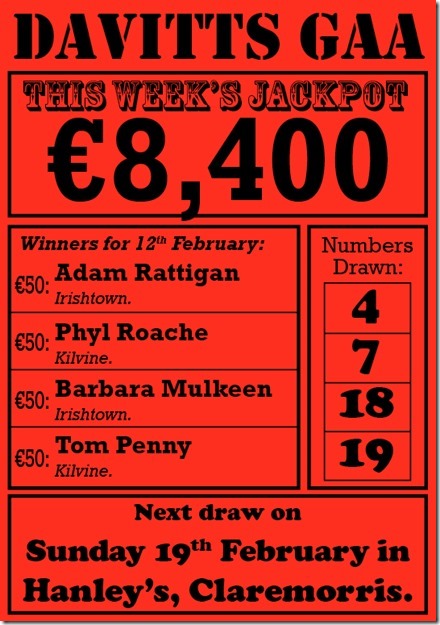 Huge thanks again to everyone who bought the Croke Park National Draw tickets from us. Your generosity and goodwill towards the Club has been overwhelming and we are sure to be one of the top selling Clubs in the country again this year.
Davitts will hold an internal draw on Wednesday night, Feb 15th, in the Borderline Bar at 10.30pm. Everyone that bought the Croke Park tickets will be included in the draw. The following prizes will be up for grabs…
1. Family Membership of Davitts GAA Club – €100 ticket.
2. Yearly Presto.
3. €50 Dinner Voucher (sponsored by The Borderline).
4. Half Yearly Presto.
5. €30 Hamper (sponsored by Western Brand Group Ltd).

The Championship draw has taken place tonight in McHale Park.
In the Senior Championship, Davitts play Breaffy away, at home to Ballaghaderreen and play Hollymount Carramore at a neutral venue in the final group game.
The Juniors are away to Claremorris in the first game, then we are at home to Lacken before playing Eastern Gaels in the last game at a neutral venue.
Interesting times ahead…. 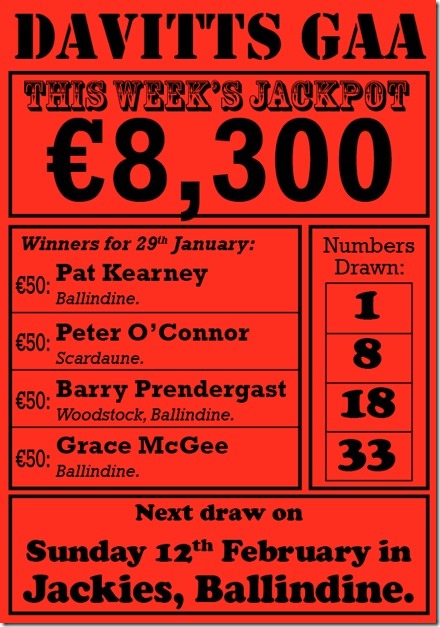 The Croke Park National Draw tickets deadline is fast approaching.
All tickets need to be returned by Wednesday night (February 8th).
Anybody that wants to buy tickets should contact any of the following officers:

Davitts would like to thank all of the sellers and especially everyone who has bought tickets, your generosity is greatly appreciated…. 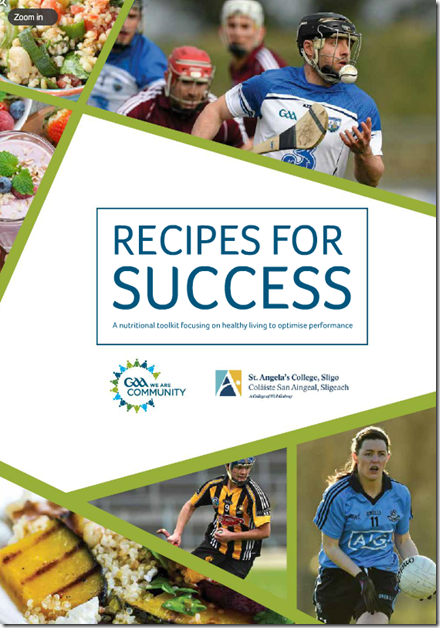 Recipes for Success is a healthy eating booklet designed by St. Angela’s College, Sligo in conjunction with the GAA for those playing sport but is useful for any members of the community interested in healthy eating. It has tips for healthy eating and some lovely recipes for breakfast, lunch and dinner. The digital version can be found at http://read.digitaleditions.ie/i/517665-recipes-for-success