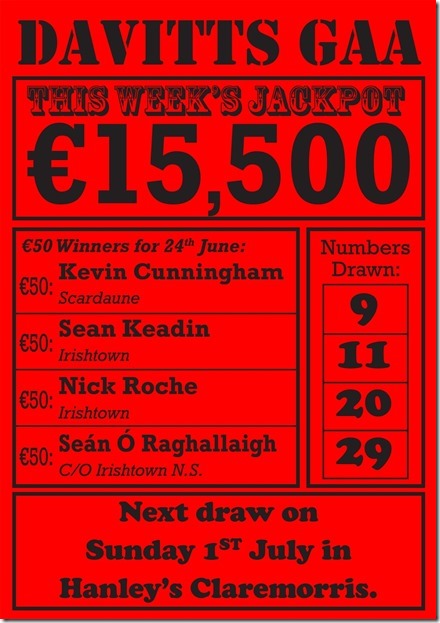 Davitts Senior’s suffered another loss in the League after being defeated, 3-13 to 0-12 at home to Kilmaine on Sunday evening. After a bright first half performance, with the understrength hosts leading by 0-9 to 0-6 at the break, a Kilmaine goal ten minutes into the second half proved to be the game’s turning point, and they dominated the remainder of the game.

Davitts and Hollymount Carramore played in the South Mayo Junior Championship semi-final on Wednesday evening in Carramore with the homeside edging a thrilling match by 3-12 to 3-9.

Davitts had the assistance of the wind in the first half and with Sean Waldron, Shane Mitchell and John Kilkenny winning the aerial battle around midfield, led by 1-8 to 2-2 at the break. The Davitts forwardline found it difficult to break down a crowded defence and Hollycarra struck for two well taken goals on the break which really stung the visitors. Richie Kilkenny slotted home the Davitts goal after a fine long delivery from Shane Mitchell, and Liam Kearns (4), Richie Kilkenny, Tommy Clarke and flying wing back Shane Treacy (2) got the first half points.

Hollymount Carramore stormed into the game after the break and they shot 1-4 without reply to go four points ahead. Clive Hennigan pointed for Davitts and the same player goaled as the game was up for grabs going into the final quarter. Davitts missed four clearcut goal chances after excellent approach work opened up the Hollycarra defence, while an injury to Sean Waldron and a black card for Davitts centre half back James Cummins, one of a number of questionable decisions from the ref, didn’t help the visitors cause.

Hollycarra fired over four points but Davitts replied with a second Richie Kilkenny goal to leave a point in the game with time running out. It was Hollycarra that got the last two points however to book their place in the A Final, where they will play Claremorris. Davitts will meet Kilmaine in the B Final. 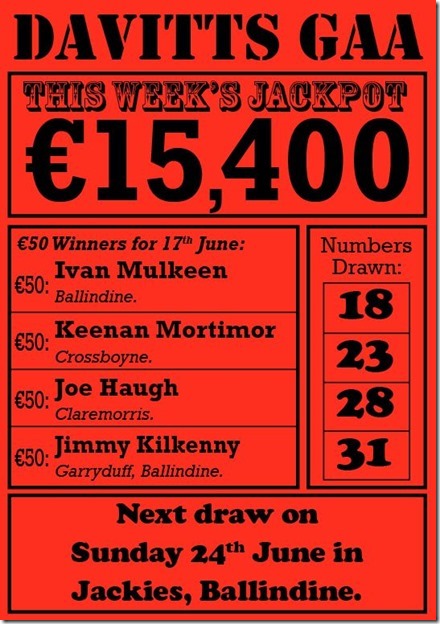 Davitts and Claremorris in the first round of the County U-14 Championship in Ballindine on Thursday evening with the visitors winning by 5-17 to 3-5.

Wind assisted Claremorris had built up a sizeable 2-13 to 1-3 lead at the break with their attack displaying great accuracy. Bon Glynn (1-1), Cathal Corless (0-1) and Sean Keadin were the Davitts scorers.

Davitts fought hard to get back into the game but every time they closed the gap, Claremorris were able to drive forward and score themselves.

Cathal Corless goaled and Brian Eagney got a brilliant soccer style goal, a one touch finish after Bon Glynn had dribbled the ball 30 metres and crossed from the endline. Cathal Corless added two points but Claremorris were always comfortable.

Not a lot went Davitts way in this game but the effort from all of the players was commendable and they kept plugging away until the final whistle.

Davitts hosted Kilmaine in the South Mayo Junior C’ship, in a game played in atrocious weather conditions on Wednesday evening, with the visitors prevailing on a 2-13 to 1-8 scoreline. The sides were well matched for most of the game but a late scoring burst from Kilmaine yielding 1-3 put paid to the Davitts challenge.

Davitts had led by 1-5 to 1-4 at the break with Tommy Clarke (1-2) and Liam Kearns (0-3) the marksmen as the wet and windy conditions made it difficult to play constructive football.

Points from Niall Kearns and Tommy Clarke saw Davitts stretch their lead to 1-8 to 1-6 after ten minutes of the second half. Kilmaine dominated the remainder of the game and four unanswered points put them two ahead with twelve minutes remaining. Davitts strung together some promising moves, one of which ended with Liam Kearns shot for goal being well saved by the Kilmaine keeper, but the visitor’s defence remained solid. Kilmaine closed the game out well in the deteriorating conditions.

The result means that Kilmaine top the group with Davitts joining them in the Semi-finals of the competition.

Best for Davitts in this game were Cian Naughton, Kevin Gallagher (up to his retiral through injury), Brian Clarke, Daniel Huane and Tommy Clarke. 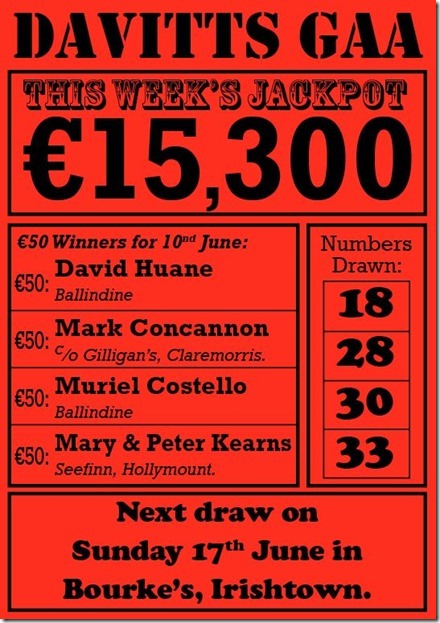 Davitts and Ballaghaderreen played a very exciting Michael Walsh League match in Ballaghaderreen on Sunday with the home side just shading it on a 2-10 to 1-12 scoreline.

Davitts, while disappointed with the result, will be encouraged by the performance over the hour. Davitts trailed by 2-6 to 1-7 at halftime with Andy Peters firing home the goal after good work by Josh Ronayne and the very impressive debutant Daniel Huane. Andy Peters, Evan Ronane (3) and Josh Ronayne (3) scored the first half points for the visitors.

The game was finely balanced throughout the second half as both teams slugged it out. Davitts had points from Evan Ronane (2), Josh Ronayne, Daniel Huane and Dara O Flaherty but the homeside hung on for the narrowest of victories.