Davitts and Hollymount Carramore will have to meet again to see who will be crowned South Mayo U-14 B Champions after they drew, 2-11 apiece, in a thrilling final in Claremorris on Sunday.

Hollycarra, playing with the assistance of the stiff wind in the first half, opened the scoring with a 5th minute point. This was cancelled out by Cathal Corless in the 10th minute. Hollycarra regained the lead again in the 16th minute with their second point but the large crowd had to wait another twelve minutes for the next score, a Dylan Gallagher point for Davitts. The game suddenly burst into life and Conor McDermott fired home a superb goal in the 30th minute. Hollycarra responded well with two fine injury time points to leave Davitts ahead by 1-2 to 0-4 at halftime.

Hollycarra came out with all guns blazing in the second half and they rattled home an unanswered 1-4 as they completely bossed the 3rd quarter. Cathal Corless narrowed the gap with a 15th minute point but Hollycarra replied straight away with a similar score. Two minutes later Davitts goaled, Fionn McLoughlin with the finish after great work by Bon Glynn and Ciaran Treacy. Points from Cathal Devane, Cathal Corless and Dylan Gallagher tied the game with just seven minutes left.

Three minutes later Hollycarra were awarded a penalty which was duly despatched despite a valiant effort from Davitts excellent goalkeeper Dylan O Brien. It looked like the game had swung Hollycarra’s way but Davitts showed admirable spirit and three super Cathal Corless points sent the game into extra time.

Hollycarra scored the only point in the first period of extra time.

Jack Melvin shot the equasliser in the first minute of the second period. The same player pointed again in the last minute and it looked like Davitts were set for victory but from the kickout, Hollycarra surged up the field and scored the levelling point with the last kick of a pulsating match.

The draw was a fair result and the replay will take place in Claremorris on Saturday evening (Sept 1st).

Dylan O Brien was once again in top form in goals with Mark Birmingham, Aaron Trench and Ethan Boyle forming a tight marking full backline. Ian Prendergast had a great game at wing back, ably assisted by the tigerish Sean Keadin and Conor Feerick. Dylan Gallagher (0-2) and Bon Glynn worked tirelessly at midfield. Wing forwards Conor McDermott (1-0) and Cathal Devane (0-1) were impressive and Jack Melvin (0-2), while quieter than usual, came good in the end with his two excellent points. In Cathal Corless (0-6), Davitts had the game’s most impressive player with Ryan Rattigan and Brian Eagney working hard in the corners. Substitutes Fionn McLoughlin (1-0) and Ciaran Treacy were both superb when introduced.

Kiltane overcame Davitts in this Mayo Senior Football Championship tie played in Bangor on Saturday evening. In a free flowing game, well handled by referee John Glavey, the Kiltane side looked good, particularly their attack, and in Mikey Sweeney they had Davitts main tormentor, whose awareness and vision was extremely impressive.

Tommy Conroy opened the scoring for the wind assisted homeside with a fourth minute point. Liam Kearns got Davitts off to a good start when he goaled in the seventh minute but Mikey Sweeney assisted for an Adam Carrabine goal a minute later. Carrabine and Ultan Corrigan pointed frees for Kiltane with Evan Ronane and Ronan McNamara firing over two fine points from play to leave the homeside ahead by a point after the first quarter.

Mikey Sweeney pointed in the 17th minute before he set up midfielder Pat Joe Gaughan for a well taken goal. Evan Ronane stemmed the tide with a 19th minute free but two minutes later Kiltane were awarded a penalty after Pat Joe Gaughan was fouled. Adam Carrabine’s well struck spot kick was superbly saved by Cian Naughton and five minutes later a long range Ronan McNamara free kick narrowed the gap to three points. Davitts had a brilliant opportunity to level matters a minute later but Kiltane’s keeper Pat Deane saved well from Josh Ronayne and both Liam Kearns and Evan Ronane were unable to finish off the rebound and Darragh Carey cleared the danger. Kiltane went downfield and tagged on three neat points from Barry McAndrew, Stephen Gallagher and Mikey Sweeney to lead by 2-7 to 1-4 at halftime.

Davitts got off to a flyer in the second hald with two points in the first minute from Colm Boyle and Evan Ronane. This was as good as it got for the visitors however as Kiltane began to turn the screw. Four unanswered points from Adam Carrabine, Mickie Conroy (2) and Ultan Corrigan for Kiltane followed. Evan Ronane and Liam Kearns shot two points for Davitts but these were cancelled out by similar scores from Tommy Conroy and Adam Carrabine before Ultan Corrigan goaled again for the hosts in the 22nd minute after a fantastic Mikey Sweeney pass. Davitts only reply was a well struck Liam Kearns penalty in the final moments of the game.

Davitts Minor team needed a win over Ardmoy in the County B Championship, having been defeated by Ardnaree in the opening round, and they obliged with an impressive 4-22 to 4-6 win in Ballindine on Thursday evening.

Davitts produced some devastating football in the first half and had racked up an incredible 3-17 tally at half time. All of the players were on top of their game with Jordan Flanagan, Dimitry Trench, Fentan Kelly, Niall Treacy, Cian Naughton, James Ruane, Niall Treacy and Stephen Nyland especially prominent. Stephen Nyland netted the first two goals with Dean Moran adding a third, as Davitts led by 3-17 to 2-3 at the break.

Ardmoy fought back bravely in the second half but found Davitts keeper Joe Prendergast in top form. The visitors never gave up but Davitts ran out comfortable winners. Davitts fourth goal was a terrific team move involving several players and finished emphatically by sub Jack Devane. 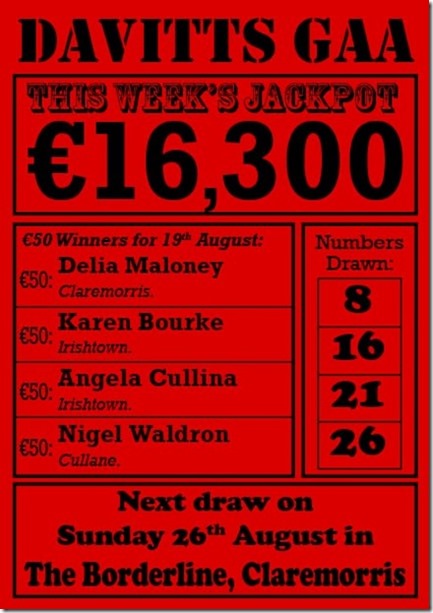 Davitts U-14 team qualified for the South Mayo B Final after beating Mayo Gaels by 8-14 to 2-5 in the semi-final played in Ballindine on Thursday evening. 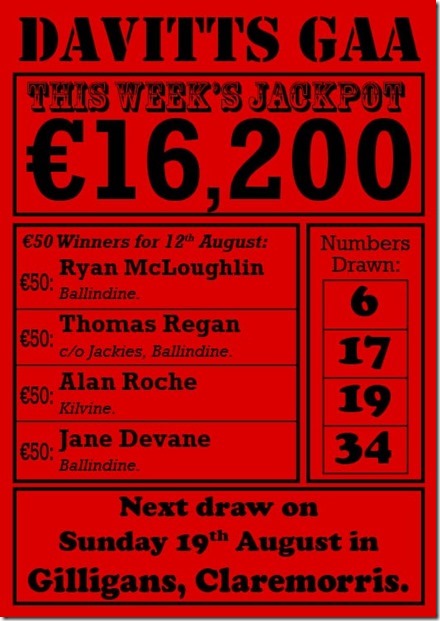 Davitts Junior team travelled to Kilmovee on Sunday morning, and after a strong display, defeated the locals by 4-10 to 1-9 in Division 4 of the Senior League.

Davitts started the game in determined fashion and with Shane Mitchell and William Freeley in top form at midfield, had built up a 2-5 to 0-4 halftime lead. Shane Treacy and John Kilkenny grabbed the goals with Treacy (2), William Freeley and Richie Kilkenny pointing.

Kilmovee came storming back into the game but the Davitts defence held firm as the whole team defended superbly. The homeside narrowed the gap to three points but points from Shane Mitchell and Shane Treacy extended Davitts lead before Niall Kearns burst through to bury a fine goal. Davitts finished the game out well with points from Tommy Clarke, Cian Naughton and two from impressive sub David Devane and a terrific Liam Macken goal after a clever assist from John Kilkenny.

Cian Naughton had a fine match in goals and in front of him all six defenders were in top form. Johnno Clarke and David Devane were introduced in the second half and both played major roles in keeping Kilmovee at bay. All of the forwards and two midfielders got on the scoresheet with man of the match Shane Treacy, Shane Mitchell, Liam Macken, Niall Kearns and John Kilkenny in top form.