Members only to apply for tickets by by Tuesday September 5th at 8pm.

No late orders will be accepted.

Unfortunately we will not have enough tickets and as a result members may be disappointed.

Please use all other avenues available to source tickets…. 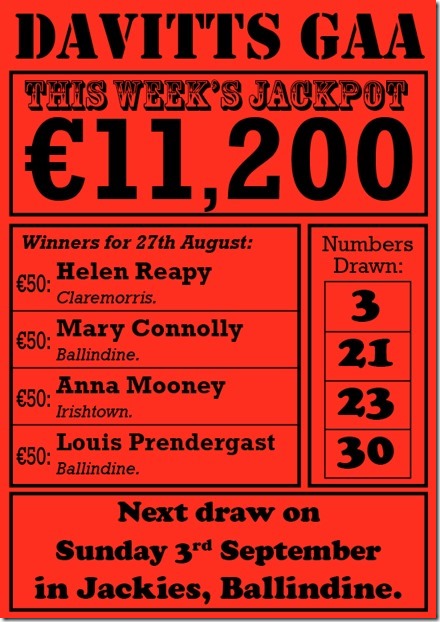 Davitts U-16 team qualified for the Final of the County D Championship with a 1-15 to 1-13 victory over Cill Chomain in Ballindine on Tuesday evening after an entertaining match played in difficult wet conditions.

Davitts looked the better team in the first half but despite having the lions share of possession, through the midfield promptings of Stephen Nyland and Sean Feerick, only led by two points, 0-9 to 1-4, at halftime. The Davitts first half scorers were Niall Treacy (0-3), Jack Devane, Fentan Kelly and Stephen Nyland (0-4).

The third quarter of the game belonged to the home side and points from Fentan Kelly, Fionan Gallagher and Stephen Nyland (2) put Davitts six ahead and when Fenton Kelly blasted home a terrific goal it looked like the game was over as a contest.

Cill Chomain finished the game strongly with a series of well taken points and were still closing in when referee Ronan Gurren blew the final whistle, to the relief of the home team. 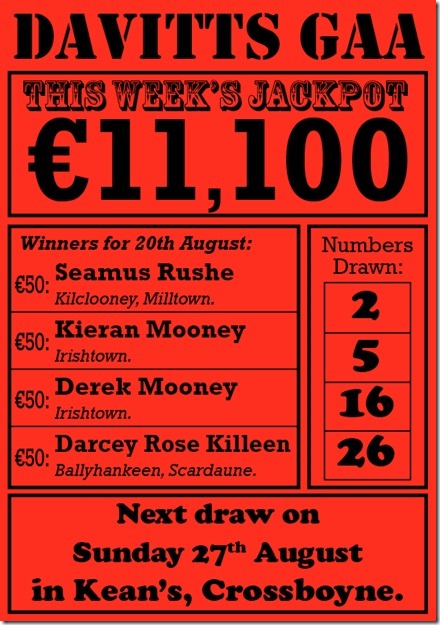 All Ireland Semi Final Replay Mayo v Kerry is next Saturday at 3pm.

Shrule Glencorrib captured the South Mayo Junior B Title with a four point victory over Davitts in Ballinrobe on Saturday evening.

After a very tentative opening to the game, Shrule Glencorrib were first to strike with a James Fitzgerald point followed by a neat goal from their livewire corner forward Paul Mullin. Davitts replied with points from Clive Hennigan and Richie Kilkenny but Shrule Glencorrib dominated the remainder of the half. Points from Paul Mullin, the very influential Kenneth Mortimer, James Fitzgerald (2), Brian Flood and a fine Conor McMorrow goal, with Gerald Griffin supplying Davitts sole reply with a neatly taken point, had Shrule Glencorrib ahead by 2-6 to 0-3 at the break. 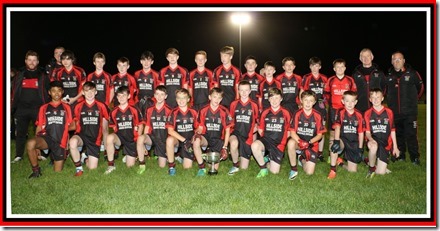 Davitts captured the South Mayo U-14 A Title with a hard fought 6-7 to 2-13 victory over a gallant Ballinrobe side in Ballinrobe on Wednesday night. Goals win games and Davitts corner forward Bon Glynn proved to be the hero for his team striking four crucial goals, two in the opening minutes of either half.

Those two early Bon Glynn goals, two more from influential midfielder Fenton Kelly and star forward Jack Devane, and points from Jack Melvin, Jack Devane and Fenton Kelly (2) had Davitts ahead by 4-4 to 2-5 at the interval.

When the lethal Glynn struck for two more well taken goals in the opening minutes of the second half it looked like Davitts would romp home but Ballinrobe fought back strongly and they added eight second half points but couldn’t find a way through for a goal due to excellent defending by the Davitts lads. Jack Melvin and Jack Devane (2) landed Davitts second half points as the Club claimed its second South U-14 A Title in three years.

Tristan Diskin was solid in goals with the outstanding Micheal Hett, Thomas Ronayne, Fionan Gallagher, Cathal Corless, Cathal Devane and captain Brian Og McTigue were all superb in defence. Fenton Kelly had a fine game at midfield, ably assisted by the hardworking John Wallace until injury forced him to retire midway through the second half. Up front Bon Glynn was the matchwinner with Jack Devane, Joe Prendergast, Davie Hennessy, Jack Melvin, Dylan Gallagher and Brian Bermingham combining effectively throughout the match.

Mike King, secretary of the South Mayo Board, presented the cup to Davitts captain Brian Og McTigue after the game to the delight of the large Davitts crowd. 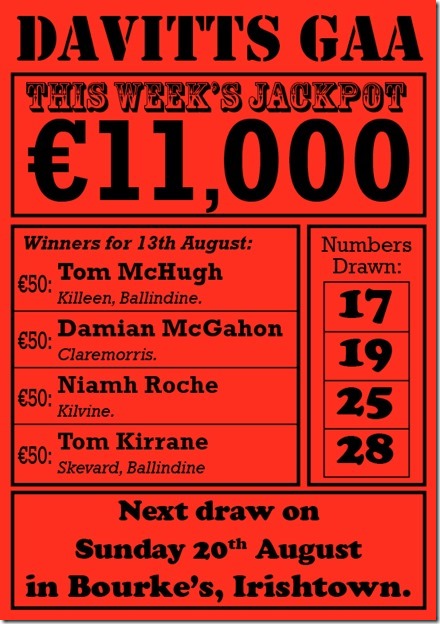