Davitts and Claremorris served up a real thriller in the County U-16 A Championship played in perfect conditions in Claremorris on Tuesday evening. In the proverbial game of two halves, the sides ended up all square, a result that both camps will probably be satisfied with.

Claremorris dominated the first half and raced into a 1-6 to 0-1 lead midway through the half. The homeside looked much sharper than an unusually lethargic Davitts team who struggled to get to the pace of the game. A fine Davy Hennessy goal in the 20th minute after a great passing move narrowed the deficit but Claremorris wiped that out with a superb goal of their own a minute later as the game sprung into life. Jack Devane goaled again for Davitts before the break but Claremorris cancelled that score out with another fine goal and they went in at halftime ahead by 3-9 to 2-3. The break could not have come quick enough for Davitts who in truth could easily have been much further in arrears.

Davitts came out looking a completely different team in the second half with the switching of the excellent Fionan Gallagher to midfield proving crucial. They played some great football with Fionan Gallagher, Fenton Kelly and Joe Prendergast winning alot of ball around the middle and they shot six unanswered points in the third quarter from Fenton Kelly, Jack Devane (2), Bon Glynn, Cathal Corless and Fionan Gallagher to narrow the gap to three points. Now the homeside were reeling but a pointed free stemmed the tide. Davitts pointed through Cathal Corless, Joe Prendergast and Jack Devane with Claremorris adding two to their tally as the game entered the final minutes. Joe Prendergast and Cathal Corless fired over two Davitts points and Jack Devane kept his nerve to slot over the equalising score in the last seconds of a very entertaining match.

Davitts secured their place in the last eight of the County Junior B Championship with a hard earned victory over a gallant Louisburgh side in a game played in lousy weather conditions in Islandeady on Sunday. In a game where scores were hard earned, Davitts prevailed on a 1-7 to 0-8 scoreline.

Davitts played with the assistance of the wind in the first half but found it hard to penetrate a rugged Louisburgh defence. A Liam Noone point from a free in the 10th minute opened the scoring but Louisburgh replied with two points to take the lead. Darragh McGale pointed in the 22nd minute with Liam Noone (2) and Shane Treacy following suit as Davitts finished the half strongly to lead by 0-5 to 0-2 at halftime.

The third quarter belonged to Louisburgh and they shot three points in this period and looked good for victory but a resolute Davitts team dug in.

Midfielders Shane Mitchell and Stephen Nyland began to dominate and in the 48th minute came the crucial score. A long delivery from Stephen Nyland was contested vigorously by Dara O Flaherty. The breaking ball was picked up by Darragh McGale who offloaded to Shane Treacy who crashed an unstoppable effort to the Louisburgh net to the delight of the Davitts supporters. The same player added a point thirty seconds later to put his side five points ahead and, although Louisburgh added three points to their tally before the end, they never looked likely to grab the goal they needed to deny Davitts.

Davitts Junior’s made it two from two with another hard earned one point victory in the South Mayo Championship away to Mayo Gaels on Wednesday evening. There was never much separating the sides throughout the match but it was Davitts that edged it by 1-11 to 0-13 at the final whistle.

The home side led by 0-9 to 0-7 at halftime with Tommy Clarke (2), Stephen Nyland (3), Seamus Roche and Darragh McGale on target for the visitors.

Mayo Gaels extended their lead to three points in the 3rd minute of the second half but the game’s crucial score came a minute later when Darragh McGale goaled for Davitts after a fine passing move to level the game. A Mayo Gaels point was cancelled out by one from Stephen Nyland. Davitts took the lead in the 44th minute with an excellent point from Dara O Flaherty after a fine run but the Gaels landed points in the 49th and 51st minutes to take the lead again. Liam Macken shot a neat equaliser in the 58th minute after another good passing move. The game could have gone either way but some good defending from both sides meant that it looked like the spoils would be shared but young Stephen Nyland had the last say, pointing a 30 metre free kick at the death to clinch victory for Davitts.

Davitts U-14 team qualified for the County B Championship semi-final after defeating Knockmore by 3-13 to 2-9 in an entertaining game played in Ballindine on Thursday evening. A storming last quarter swung the game in the homeside’s favour and they will now meet Ballina Stephenites in the semi-final in Ballina on July 4th.

Davitts started well with Ciaran Treacy opening the scoring with a first minute point and the superb Conor McDermott goaling in the 5th minute. Knockmore rallied with two points and a peach of a goal but Davitts centre back Mark Birmingham levelled the game with a neat point. A second Davitts goal, this one a fine individual effort from Fionn McLoughlin in the 19th minute was cancelled out by three points from the visitors to leave the sides level at the interval.

The exchanges were tight in the third quarter with the defences on top but Davitts hit their purple spell just at the right time. Midfielders Dylan Gallagher and Sean Keadin started to dominate and they fired over some classy points. Fionn McLoughlin scored a terrific goal with ten minutes remaining and the same player, Harry Fallon, Conor McDermott (2) and Ethan Boyle all pointed before Knockmore goaled from the penalty spot, a score that came too late to revive their chances of a comeback.

Davitts can now look forward to next weekend’s Feile. Davitts are grouped with Kilcormac-Killoughey (Offaly), Headford (Galway) and Aodh Ruadh, Ballyshannon (Donegal) with all games being played at Davitt Park. 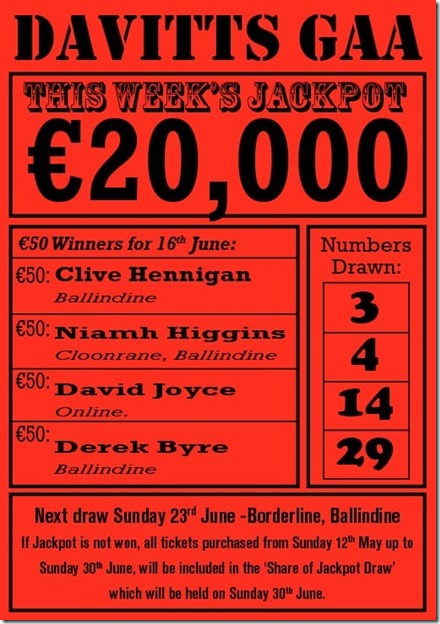 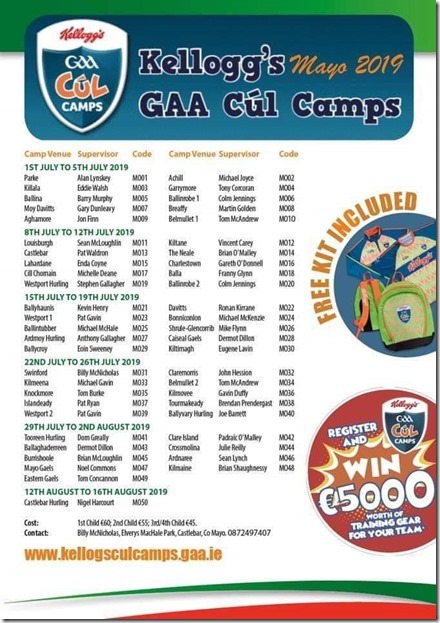 Davitts narrowly defeated Shrule Glencorrib, 2-11 to 2-10, in the first round of the South Mayo Junior Championship in Ballindine on Wednesday evening. A strong first half showing laid the foundations for this win but Shrule Glencorrib produced a fighting second half performance and will be disappointed not to have got something for their efforts.

The visitors started brightly and led by 0-3 to 0-1 after the first ten minutes while playing into the wind, with Tommy Clarke shooting Davitts opening point. Davitts captain Seamus Roche put his side ahead with a 12th minute goal and they added points from Aidan McTigue (4), Darragh McGale (2), Richie Kilkenny and Seamus Roche and a second Seamus Roche goal in the 27th minute, a piledriver from thirty yards after great work by Liam Macken and Tommy Clarke.

Davitts led by 2-9 to 0-5 at halftime and were looking good for victory but Shrule Glencorrib had different ideas. They began to chip away at the lead with Davitts squandering several chances. Davitts only managed to score two points in the half, through Aidan McTigue and Brian Clarke, and spent the last ten minutes trying to hold on to the lead as the visitors scented blood.