The minor team recorded their second league win with a comfortable 1-14 to 1-6 victory over Tourmakeady on Friday evening. A well taken goal by substitute Clive Hennigan, making a welcome reappearance to the club colours after a long absense through injury, sealed the victory in the last few minutes, while Darren Connolly, another sub on the comeback trail from injury also impressed scoring two fine points. Others to star for Davitts were Gerard McWalter, Donal and Mark Ronayne, James Prendergast, midfielder Michael Waldron (0-2), Josh Ronayne (0-9) and Tommy Clarke (0-1).

The U-14 team bounced back from a hefty first round defeat by Ballinrobe, to gain their first brace of league points, with a comprehensive 8-14 to 2-1 victory over Louisburgh in Ballindine on Thursday evening. Davitts dominated throughout with Michael and Padraig Mangan, Mikey Devane, Sean Burke, Dylan Keadin and Jack Rodgers in top form.

The second team rounded off a great week for the club, defeating The Neale in Cong, 1-7 to 0-8 in Division 1F of the senior league. This makes it three wins from three outings for John A Noone’s exciting young side. Davitts ability to take their scores was the difference between two well matched sides. Young Michael Waldron, Colm Roche and James Cummins were outstanding in defence, Tommy Mitchell and John Heneghan did very well at midfield, while up front Kevin Connolly was in terrific form along with the livewire Richie Kilkenny.

Breaffy dominated this league game from start to finish in Breaffy on Sunday. Powered by their impressive midfield partnership of Seamus O Shea and Finian Canavan, Breaffy led 1-8 to 0-3 at half time, the goal coming from corner forward Ronan Conway after a sweeping move involving several players. Davitts lost the influential Michael Conroy early in the game with a hamstring injury and finished the game with 14 players, Ronan McNamara limping off five minutes from time, also with a hamstring injury, after Davitts had used their full complement of subs. Breaffy had star performances from David Gavin, Gerry Jennings, Seamus O Shea, Finian Canavan, Aidan O Shea, Rory Martin, Ronan Conway and Alan Durkin. On a day Davitts will quickly want to forget, only Colm Boyle, Paul Carey, Liam Kearns and Ronan McNamara enhanced their reputations.

Davitts second team produced a tremendous second half performance to defeat Shrule-Glencorrib, 1-10 to 1-7, in this Division 1F game, played in Ballindine on Saturday evening. At halftime the visitors led by 1-5 to 0-3 but Davitts rallied well in the second half to maintain their 100% record in this competition.

While Shrule-Glencorrib had that wily old fox Kenneth Mortimer playing up front, Davitts, at the other end, had the wilier (and indeed, much older fox) Mark Diskin pulling the strings, producing a display that belied his years. Davitts had other top class displays from the very impressive Tommy Mitchell, Martin Cosgrove, Michael Waldron, Richie Kilkenny, Kieran Mooney and Brendan Devane.

The minor team secured their first brace of league points when defeating Bonniconlon, 1-14 to 3-7, in a very exciting match played in sun drenched Ballindine on Sunday. There was little between these two sides throughout the match and they went in level, 0-5 to 1-2, at half time. Bonniconlon goaled just after halftime, after a sweeping move, but Davitts responded in the proper fashion, playing some terrific football, and clinched victory in the dying moments with points from impressive sub Darren Connolly and Tommy Clarke.

DEcent–asCENT – Are you feeling lucky, punk? 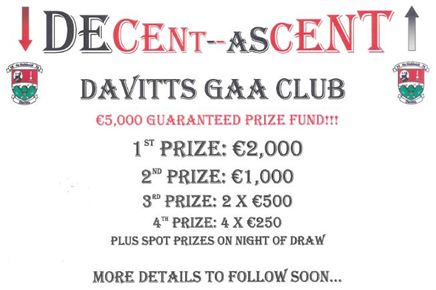 Davitts will be launching a one-off mega raffle in the coming weeks. There is a whopping Prize Fund of €5,000 guaranteed on the night of the draw, so make sure you don’t miss out on your chance to enter as there will be a limit on the number of tickets available (2,000). The name of the game is DEcent–asCENT because if you’re really lucky you will only have to pay 1c (yes, that’s ONE CENT!) for your ticket – if that’s not a decent investment we don’t know what is!

However, players won’t be given the luxury of selecting the price of their ticket…each ticket will be sealed inside an envelope. Once opened by the player, whatever price is printed on the ticket is the price that must be paid!! But don’t worry, the most expensive ticket isn’t going to cost you an arm and a leg. The unluckiest player will have to shell out €20 for their ticket, but at odds of 2000/1 the chances of choosing this ticket are double that of the New York footballers lifting Sam Maguire in September!

Watch this space for details on the date and venue of the draw, and also when and where you will be able to purchase tickets!

Davitts second team followed the example of the intermediate team, winning their opening Div 1F league game in style, away to Mayo Gaels last Sunday. The final scoreline of 2-13 to 0-4 reflects the dominance of a fitter and slicker Davitts side. Davitts were in command throughout the game and led 2-8 to 0-0 at half time, the goals coming from county minor Josh Ronayne and midfielder Shane Mitchell. Mayo Gaels improved after the break as Davitts controversial manager John A Noone used his full complement of subs. In a fine all round team performance Davitts had star players in Michael Ronayne, Colm Roche, Laurence Daly, Michael Waldron, Shane Mitchell, Mark Diskin, Pat Coyne and Josh Ronayne.

After 16 minutes of this league match, played in windy Ballindine on Saturday evening, Aughamore led by 0-5 to 0-0, and only the most optimistic Davitts supporters in the large attendance gave the home team any chance of victory, but nobody told the Davitts players, who absolutely dominated the rest of the game. Points from Alan Freeman (2), Liam Groarke, Caoimhin Carty and Cathal Carty had the visitors ahead midway through the first half while assisted by the strong wind, but Davitts began to play some top class football and the impressive Liam Kearns got their opening two scores from play before Keith Prendergast and David McDonagh closed the deficit to the minimum at the interval.

Davitts lively wing forward Aidan McTigue and Alan Freeman from Aughamore swapped points after the break before Davitts assumed complete control around the middle of the field, with Ronan McNamara and David McDonagh winning lots of possession and the halfbackline of Jonathon Clarke, Paul Carey and James Cummins mopping up the breaks and driving forward. Further points from McNamara, Kearns (2), McTigue (2) and a monstrous effort from McDonagh had Davitts five points up before Colm Forde pointed for the visitors with 2 minutes remaining. It was fitting that man of the match Liam Kearns had the final say, scoring a 45 in injury time.

As well as those mentioned, Davitts had brilliant performances from team captain Colm Boyle, leading by example, Kevin Gallagher and Michael Conroy, who caused panic in the Aughamore defence throughout the game. In a game Aughamore will quickly want to forget, their best players were David Kilkenny, an impressive full back, Caoimhin Carty, Colm Forde, Alan Freeman and Cathal Carty, until he got injured.

The U-16 team got their Division 2 League campaign off to a disappointing start in Kiltimagh on Tuesday evening. They were defeated 2-8 to 0-6 by a physically stronger Kiltimagh side, in a game played in atrocious conditions. Davitts never got going in this game and were it not for the outstanding performance of Brian Clarke in the fullbackline, the margin of defeat would have been much greater. Brian got best assistance from Gerard McWalter, Donal Ronayne and Tommy Waldron.