This week’s Presto result.
The numbers drawn were 19, 22, 23, 30.
The Jackpot was not won.
The following players won €50 each:
Geraldine Daly, Lisduff
Dave Gibbons, Farmhill
Stephen Diskin, Ballindine
Emily, Niall, Keely & Aidan, c/o Rosemary Dunne.
There will be a Jackpot of €14,600 for next Sunday night’s draw.
Use the following link to play online:
https://play.clubforce.com/play_newa.asp?ll_id=120…

Davitts and Aghamore met in the U-15C Championship in Ballindine on Tuesday and they served up a thriller with Davitts winning on a 6-7 to 2-14 scoreline. The result was in doubt up to the final whistle with Davitts getting their final goal right at the death of a pulsating game.

Davitts led by 2-3 to 0-2 at the first water break with Aaron Conneely-Basham and Fionn McTigue smashing home two cracking goals and Brian Corless, Dylan Gormally and Ronan Kelly getting the points.

Aghamore tagged on six points in the second quarter with Davitts replying via points from Ronan Kelly and Dylan O Brien, from a 45, and a second goal from Fionn McTigue, to lead by 3-5 to 0-8 at halftime.

Aghamore shot three early second half points but two Davitts goals from Dylan Gormally and the very impressive Aaron Conneely-Basham appeared to put Davitts firmly in the driving seat. Aghamore were not going away however and they shot 2-2 in a four minute blitz between the 44th and 48th minutes to leave the minimum between the sides at the second water break.

Davitts had to dig deep at this stage and midfielder Conor McDermott steadied the ship with two points in the 56th and 59th minutes. Aghamore pointed in injury time as they threw everything into getting a winning goal but the homeside had the final say when Aaron O Dea netted with virtually the last kick of an absorbing game.

Dylan O Brien (0-1) was superb in goals for Davitts with Ben Corless, Tadhg Feerick, Ethan Boyle, Brian Hett and Noah O Brien all defending heroically in front of him. Conor McDermott (0-2) and Brian Corless (0-1) had a great midfield duel with their Aghamore counterparts. The Davitts forwards were in lethal goalscoring form (not quite as good with the point shooting) with Aaron Conneely-Basham (2-0), Fionn McTigue (2-0), Ronan Kelly (0-2), Dylan Gormally (1-1) and Aaron O Dea (1-0) in great form and Ciaran Treacy pulling the strings with his clever play.

There are a limited number of places left for next week’s Cul Camp (July 19th-23rd). Registration closes at 11am on Friday (July 16th).
Book now using the following link:
https://www.kelloggsculcamps.gaa.ie/booking/?county=Mayo… 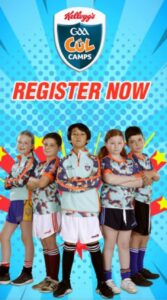 An understrength Davitts team were defeated, 1-13 to 2-5, by The Neale on Saturday evening in Cong in the Michael Walsh senior league.

After a tentative beginning the local side burst into life and fired a goal and two points in the 4th and 5th minutes. They added another point before Evan Ronane opened Davitts account with an 11th minute point. The Neale added on two points before Cathal Higgins got on the end of a good move involving Tommy Waldron and Evan Ronane to crash home Davitts first goal in the 15th minute. The Neale pointed again before the water break to lead by five points.

The second quarter saw both teams add three points to their tallies with Evan Ronane getting the Davitts scores.

The Neale shot the first three points of the second half but they were cancelled out by a well struck 44th minute Liam Kearns penalty after Donie Ronayne was fouled. Davitts keeper Keith Prendergast pointed a 45 metre free kick just before the second water break to narrow the deficit to four points but this was to be Davitts final score. The Neale added one point two minutes from time to win by five points.

This week’s Presto result.
The numbers drawn were 17, 22, 29, 33.
The Jackpot was not won.
The following won €50 each:
Kieran Mooney, Irishtown
Ciara Nyland, Ballindine
Tom Heneghan, online
Sean Brannick, Woodstock.
The Jackpot rises to €14,500 for next Sunday night’s draw.
Use the following link to play online:
https://play.clubforce.com/play_newa.asp?ll_id=120…

Davitts Junior team were defeated, 1-11 to 1-7, by Mayo Gaels in the South Mayo Junior Semi-Final in Ballindine on Wednesday evening. The game was played in difficult greasy conditions and while it was competitive throughout, Mayo Gaels were full value for their four point victory.

The Gaels pointed to equalise in the 18th minute but the impressive Shane Treacy restored the homeside’s lead a minute later before the Gaels got their only goal. Treacy fired over two points in quick succession and Mayo Gaels got one point to leave them ahead by the minimum at the interval.

Mayo Gaels opened the second half scoring in the 35th minute and this score was cancelled out by a fine Fionnan Gallagher point after a good run. Both defences were on top at this stage and the Gaels scored the only other score before the second water break to extend their lead to two points. The lively Richie Kilkenny clipped over a neat point in the 48th minute but this was to be Davitts final score and three points in the 55th, 56th and 57th minutes sealed the victory for Mayo Gaels who will play the winners of the second semi-final between Garrymore and Claremorris in the South A final while Davitts will play the loser of that tie in the B final.

Davitts GAA Club has been allocated 12 tickets for the Mayo v Leitrim Connacht Championship match in Castlebar next Sunday. Any member interested should contact John Costello at 0879079987 or e-mail secretary.davitts.mayo@gaa.ie before 10am on Thursday.