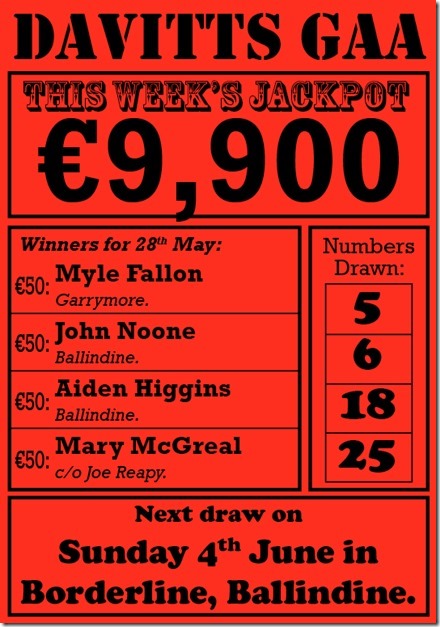 Fixtures For Week Commencing 29th May 2017

Davitts and Claremorris met in the first round of the County Junior B Championship on Saturday in Claremorris with the home side coming out the victors by five points. The Claremorris attack was much more efficient than Davitts who shot some terrible wides over the course of the game.

Claremorris led by 1-8 to 0-2 at halftime with Sean Waldron and Mattie Trench on target for Davitts. The Davitts defence were overworked in the first half but they defended well.

Davitts came storming into the game in the second half with Sean and Michael Waldron winning the midfield battle. The attack however, continued to squander several chances but points from Sean Waldron, John Costello, Tommy Clarke and Seamus Roche (2), and a penalty, expertly converted by Mattie Trench had narrowed the gap to four points with six minutes remaining.

Claremorris lifted the siege with two converted frees before the finish with Shane Mitchell replying for Davitts.

Davitts will know that they will have to improve their shooting before the next game which is at home to Lacken.

…in Bourke’s, Irishtown. Tables of four €40. Tell your friends, it’s going to be a fun night! 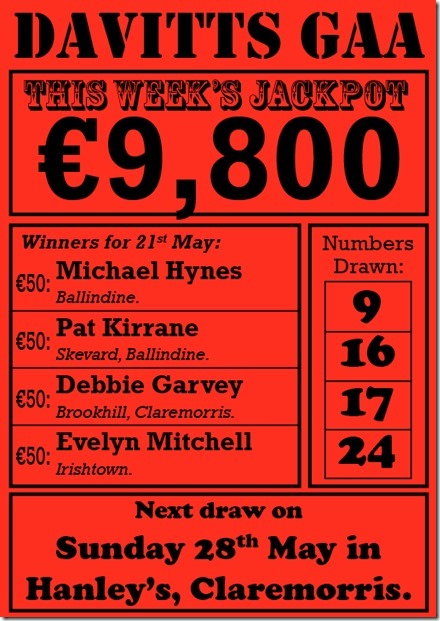 Davitts went to Ballinrobe on Friday night and came away with an emphatic 4-16 to 0-14 victory over the local side in the O Mara Cup.

After Shane Treacy pointed for Davitts to open the scoring, Ballinrobe fired over the next five points to lead by 0-5 to 0-1 after ten minutes. Then Cathal Hennelly began to dominate around midfield and the Davitts attackers began to enjoy themselves.

Evan Ronane pointed and then Josh Ronayne burst through the centre before shooting his side’s opening goal. Evan Ronane and Ronan McNamara added two more goals as the Davitts attack, with Michael Conroy pulling the strings, produced some fine football. Points from Cathal Hennelly (2), Ronan McNamara and Evan Ronane saw Davitts 3-6 to 0-7 ahead at halftime.

Davitts kept the foot on the pedal for most of the second half with Josh Ronayne in super form scoring 1-3. His younger brother Jack, who worked hard throughout the game, got in on the scoring act with a sweet point and Cathal Hennelly, Thomas Waldron, Evan Ronane (2) and sub Keith Prendergast (2) completed Davitts impressive tally.

Davitts U-14’s continued their successful run this year with a convincing 7-6 to 1-10 victory over a gallant Crossmolina team in the County Div 3 League Final played in sunny conditions in Islandeady on Thursday evening.

Davitts showed their intent early and a fine Davy Hennessy goal in the second minute settled the nerves. Three minutes later Jack Devane emphatically finished a slick move involving Joe Prendergast, Fenton Kelly and Dylan Gallagher and the same player scored a third goal in the eighth minute after great work by John Wallace and Davy Hennessy. Crossmolina were tagging on points but found the Davitts defence in superb form with Fionan Gallagher and Micheal Hett in terrific form throughout the first half.

Davy Hennessy and Jack Devane combined again in the 17th minute with the latter completing his hat trick with another unstoppable finish. He added a point five minutes before the half time whistle to leave Davitts ahead by 4-1 to 0-7 at the interval.

As he did in the first half, Davy Hennessy goaled in the second minute of the second half to extend his side’s lead. Davitts added points from Hennessy and a neat Dylan Gallagher effort. Crossmolina then had a good spell, scoring a fine goal and three points to narrow the gap but Jack Devane fired over three fine points before Jack Melvin drove home goal number six, in the 23rd minute, after good work by Brian Bermingham.

As the game entered its final minute it was fitting that Davy Hennessy finished the scoring with an opportunist goal to complete his hat trick.

Davitts ability to score goals was the difference between the sides. Tristan Diskin was solid in goals and Fionan Gallagher, the superb Micheal Hett and Cathal Devane formed an excellent full back line. The half back line of team captain Brian Og McTigue, Thomas Ronayne, a fine centre back, and Cathal Corless gave nothing away lightly.

Well done to the whole squad and to the team mentors, Derek Byrne, Frank Kelly, Darren Connolly and Tommy Ronayne.

The John West Feile Peile na n-Og will take place on the weekend of June 23rd-25th.

Davitts and Castlebar Mitchels, Mayo’s two representatives at the Feile, will join forces in running a bucket collection around McHale Park at the Mayo v Sligo Connacht Senior Championship game this Sunday. The proceeds will go towards the considerable expenses involved over the Finals Weekend.

A Feile Fundraising Table Quiz will be held in Bourke’s, Irishtown on Friday June 2nd at 9pm. Please support.

Davitts U-16 team put up a brave fight before being defeated, 1-12 to 1-8, by a physically stronger Ardmoy McHales side in the County League Div 4 semi-final played in Ballindine on Tuesday evening.

Ardmoy led by 1-5 to 0-4 at halftime with Zack Keadin (3) and Fenton Kelly getting the Davitts scores. They extended their lead to six points before a Stephen Nyland point and a cracking Fenton Kelly goal left two between the sides as the game entered the final quarter. Ardmoy tagged on five more points before the finish with Niall Treacy and Stephen Nyland (2) pointing for the homeside.