This week’s jackpot is worth €12,900 and the draw will be held on 31st December in The Borderline. 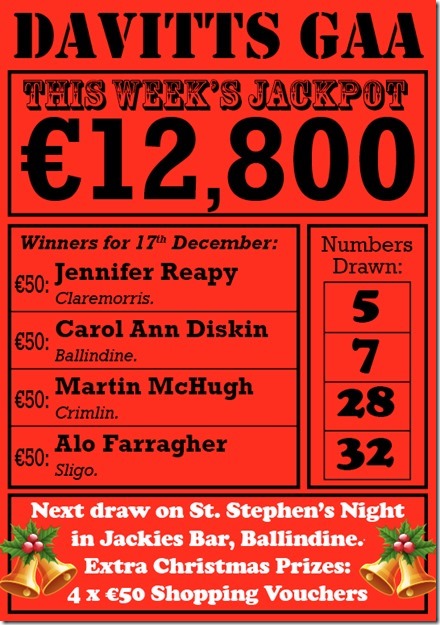 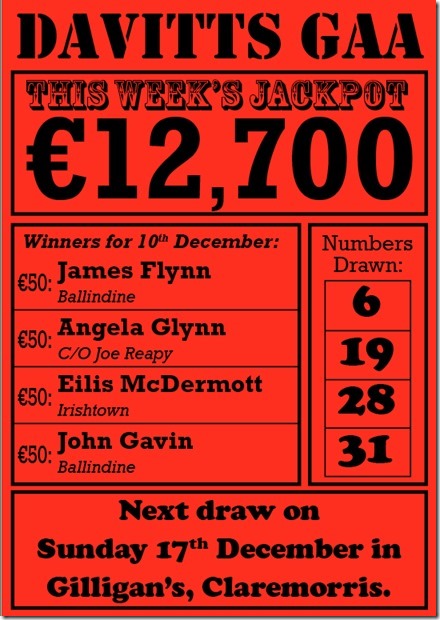 Ballaghaderreen captured the County U-21 B title with a very hard fought victory over a gallant Davitts side in McHale Park on Saturday night. The scoreline suggests that they had an easy victory but with five minutes of normal time remaining they were leading by just two points as Davitts stormed back into the game having trailed by 2-4 to 0-3 at the break.

Three Conor Keane points as Davitts began to take control of the game. Evan Ronane fired over another and Ballagh got a point of their own before points from Conor Keane and Evan Ronane had Davitts just three points down and with all the momentum. Two Ballaghaderreen points were cancelled out out by the lethal Keane and Ronane and Davitts were desperately unlucky not to equalise when Michael McGarry hit the side netting with an attempt for goal after a searing run. Another Evan Ronane point reduced the deficit to two points in the 54th minute but Ballaghaderreen managed to regroup. They pointed in the 56th minute and a goal three minutes later put paid to Davitts brave challenge. Ballagh added another 1-1 in injury time with a Conor Keane point being Davitts sole reply.

The final scoreline does not do justice to Davitts but congratulations to Ballaghaderreen who weathered the second half storm and were able to get the vital scores at the finish.

Davitts, while desperately disappointed at losing, did well to reach the final with injuries and sickness depriving them of the services of Jack Ronayne, Kieran Fahy, Cian Naughton, John Kilkenny and Jamie Mullee for the entire campaign. They lost midfielder Padraig Mangan with a knee injury in the Quarter final but their young replacements stood up to the plate and played with great courage and no little skill. Mikey Kelly was a dependable goalkeeper throughout the campaign while in front of him Patrick Keadin and Michael Waldron were superb. Dimitri Trench, a name we will be hearing a lot of in the coming years, Tom Corless, Daniel Huane and inspirational captain Micheal Mangan played brilliantly in every game. Cathal Hennelly, the afore mentioned Padraig Mangan and young Niall Kearns all operated in the midfield sector and more than held their own.

Ronan Kirrane Appointed Assistant Secretary of the Mayo County Board

The best of luck to Ronan Kirrane in his new role as Assistant Secretary of the Mayo County Board. He will be a great addition to the County Board as his administration skills are second to none. The Club would also like to wish the new County Secretary Dermot Butler well

Davitts U-21’s qualified for the County B Final after a fine 3-13 to 2-4 victory over Ardnaree in Bekan last Sunday. They now play Ballaghaderreen in Saturday’s final in McHale Park at 5pm.

After Evan Ronane opened the scoring after two minutes with a tidy point but Ardnaree responded well with a goal and a point in the next five minutes. Davitts didn’t panic and after surviving a few scares, equalised with the alert Conor Keane goaling after Michael McGarry’s initial effort was saved by the Ardnaree keeper. Man of the match Ryan McLoughlin pointed to give Davitts the lead but this was cancelled out a minute later. Davitts then took over for the last twelve minutes of the half and the second goal came when Cathal Hennelly’s piledriver from thirty yards was parried by the keeper but fell to Ryan McLoughlin who slotted to the corner. Shane Treacy and Conor Keane added points as Davitts went in six points ahead, 2-5 to 1-2.

Whatever chances Ardnaree had of a comeback were dealt a major blow when their corner back received a second yellow card within a minute of the restart. Evan Ronane pointed for Davitts and when Michael McGarry goaled after a superb run by Shane Treacy it looked ominous for the North Mayo lads. Michael McGarry and Ryan McLoughlin extended the lead but Ardnaree fought back bravely. They pointed before they were awarded a penalty which was neatly converted. They were awarded another penalty less than a minute later after an incident which saw Davitts Patrick Keadin and Niall Kearns both receiving black cards. This penalty was brilliantly saved by Mikey Kelly to lift his team and points from Ryan McLoughlin and Shane Treacy put Davitts thirteen points ahead before Ardnaree shot the last point of the game.

This was another fantastic team effort with everyone playing their part. 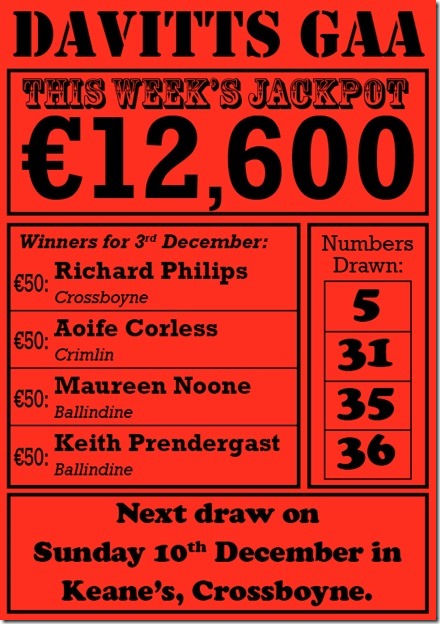