The U-21 Brennan Cup match against Holly Carra has been brought forward to 2.30pm on Monday 28th Oct in Ballindine

Davitts U-21 team got their County C Champaign off to a winning start after a hard earned 1-12 to 0-7 victory away to Swinford on Sunday. An unanswered 1-5 in the last ten minutes swung the game in the visitors favour as they finally got to grip with the Swinford challenge.

Cian Naughton opened the scoring with a fine Davitts point from distance in the first minute. Swinford equalised in the eighth minute but a point from play by wing back Aidan Macken and a free converted by Evan Ronane put Davitts two ahead after 11 minutes. Swinford pointed twice to level the match but Davitts captain Evan Ronane fired over three excellent points before Swinford completed the first half scoring with a 30th minute point to leave Davitts ahead by 0-6 to 0-4 at halftime.

Jack Ronayne pointed a free in the opening minute of the second half but Swinford points in the 38th and 39th minutes left the minimum between the teams. In the 40th minute Evan Ronane received a black card and three minutes later Swinford equalised and at this stage they looked the more likely winners.

Davitts responded in fine fashion with Jack Ronayne converting two frees in the 52nd and 55th minutes. Two minutes later the same player supplied a defence splitting pass to Ryan McLoughlin and he made no mistake to finish in style for the game’s only goal.

Stephen Nyland shot the last three points of the game, two of them were long range frees of the highest calibre and the third a close in free after Niall Treacy was fouled.

Davitts will have to improve on this performance if they are to advance to the knockout stages. They had fine performances from Ciaran Fahy, Dmitry Trench, Jordan Flanagan, Evan Ronane up to his dismissal, Stephen Nyland (second half) while second half subs, the lively Niall Treacy and Niall Kearns, contributed well towards the victory. Next up is a home game against Ballyhaunis. 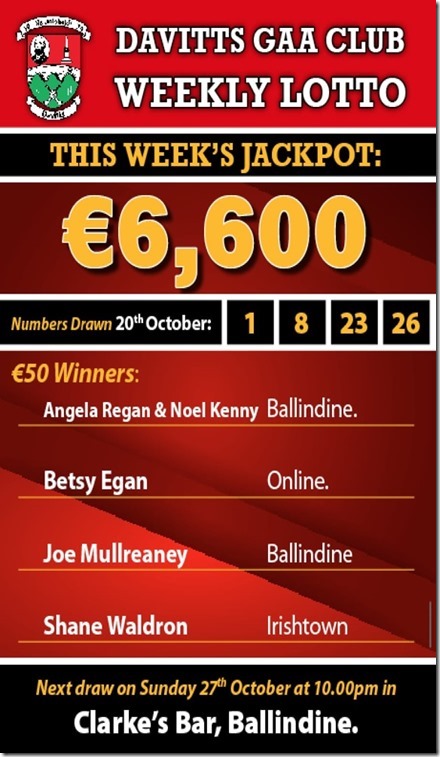 Davitts Junior’s ended their Division 4 League campaign with a narrow defeat, 1-12 to 0-13, at home to Tourmakeady on Sunday. The defeat means that Davitts will compete in Division 5 next season.

Davitts trailled by 0-7 to 0-6 at half time with Jack Ronayne (3), Shane Treacy, Darragh McGale and Shane Mitchell hitting the target.

The second half started off well for the home side with Shane Treacy (2), Cian Naughton and Jack Ronayne all pointing in the first ten minutes. Tourmakeady pulled a point back in the 14thminute and were awarded the most dubious of penalties in the 17th minute, a refereeing gift that they gratefully accepted to take the lead. Tourmakeady added a point in the 21st minute to go two points ahead but points from Jack Ronayne and Darragh McGale levelled the game with five minutes remaining. The visitors added three points to their tally with Jack Ronayne getting Davitts sole reply.

Davitts captured the County Minor D Championship after a hard earned victory over a battling Parke Keelogues Crimlin side in Bekan on Friday night.

PKC got off to a flying start with three points in the first six minues before man of the match Niall Treacy opened the Davitts account in the seventh minute. PKC extended their lead to three points with a 15th minute score but Davitts hit a purple patch in the last twelve minutes of the first half.

Niall Treacy pointed in the 18th minute and followed that up with a cracking goal less than a minute later to give his side the lead. Further points from Jack Devane, Fenton Kelly and two from Stephen Nyland left Davitts ahead by 1-6 to 0-4 at halftime.

Niall Treacy extended the lead with two further points in the 34th and 36 miniutes. A 39th minute PKC point was cancelled out by Niall Treacy as Davitts looked set to cruise to victory.

PKC refused to lie down however and they struck for a goal in the 49th minute to narrow the deficit to four points. Zack Keadin and Niall Treacy pointed to put Davitts six points ahead with four minutes of normal time left. PKC scored another goal before the finish but Davitts were able to see the game out and win by three points.

Joe Prendergast had a fine game in goals with Tomas Ronayne, Charlie Phillips and Micheal Hett making up an impressive full back line. Fionnan Gallagher was outstanding at number six, getting great assistance from his wing men Sean Feerick and John Wallace.

Team captain Stephen Nyland (0-2) and Fenton Kelly (0-1) were two strong running midfielders who controlled the middle for most of the game.

Up front, Niall Treacy (1-6) was the star of the show, getting good assistance from Daniel Corless, Jack Devane (0-1), Gary Bourke, Cathal Corless and Zack Keadin (0-1).

Substitutes Brian Og McTigue and Bon Glynn both played their part when introduced. 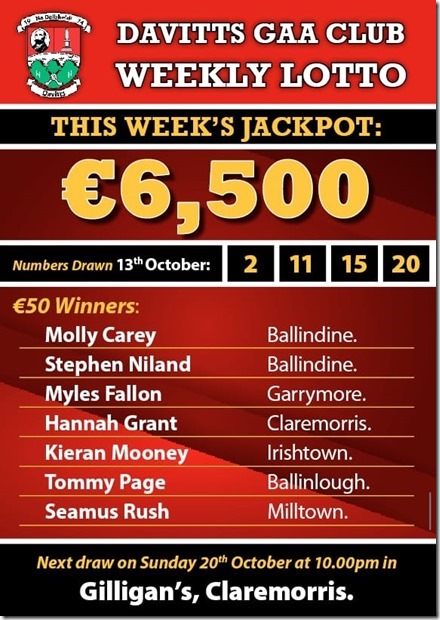 Davitts Senior’s ended their League Div 3 campaign with a 2-12 to 1-10 home defeat on Saturday, to a determined Castlebar side, themselves trying hard to avoid relegation. Castlebar had raced into a 1-7 to 1-2 lead at halftime against an understrength Davitts outfit.

Davitts performed better in the second half and had closed the gap to two points going into injury time before a late Mitchels goal ensured their win.

The Junior’s were beaten away to Westport on Sunday, a result that makes relegation to Division 5 for next season a likely prospect. The home side had led by 1-7 to 0-4 at the interval but four second half goals in the space of eight minutes completely wrapped the game up for a strong Westport side.

Davitts captured the South Mayo U-16 A title with a well deserved seven point victory over neighbours Claremorris on Tuesday night in Bekan. The two sides had played each other twice earlier on in the season with both games ending in stalemate but Davitts were more clinical on this occasion and led from pillar to post in front of a fine attendance.

The outstanding Fionnan Gallagher opened the scoring for Davitts in the fourth minute with a fine point into the strong wind. Jack Devane doubled the lead a minute later, after fine work by Bon Glynn and Dylan Gallagher. Claremorris midfielder Thomas McCormack Flanagan opened his side’s account in the seventh minute with a fine point from play. From the resulting kickout Davitts strung together a sweeping move which ended with Bon Glynn firing home his side’s first goal. Thomas McCormack Flanagan with two well struck points and a Mark Maloney free cut the lead to a point in the 18th minute.

Fionnan Gallagher put Davitts two up in the 23rd minute and two minutes later Davitts crafted another fine goal with Dylan Gallagher finishing in style after great work by Jack Devane and Fionnan Gallagher. Evan O Brien and Lewis Lally combined for a Claremorris point converted by Lally in the 27th minute and Jack Devane, with a well struck 40 metre free kick, closed the first half scoring in the 30th minute to leave Davitts ahead by 2-4 to 0-5 at halftime.

Claremorris started the second half brightly with Conor Dennedy pointing in the 33rd minute. Cathal Corless cancelled this score out three minutes later with a fantastic point after a searing run. The same player set up dynamic corner back Sean Keadin for Davitts third goal in the thirty eighth minute and he finished emphatically past the Claremorris keeper. Claremorris were enjoying a lot of possession but poor shooting, fine Davitts defending and some great saves by Tristan Diskin made it difficult for them to close the gap.

Mark Maloney pointed a free for Claremorris in the 45th minute after the lively Niall Hurley, a second half substitute, was fouled. Davitts wrapped the game up in the 47th minute, another patient build up resulting in a fourth goal, scored by Cathal Corless after terrific play by Fenton Kelly and Dylan Gallagher. Davitts were happy to contain Claremorris who tried earnestly up to the final whistle. The only score in the last twelve minutes of the game was an injury time goal for Claremorris by Niall Hurley after fine work by Thomas McCormack Flanagan and Oran McNulty. 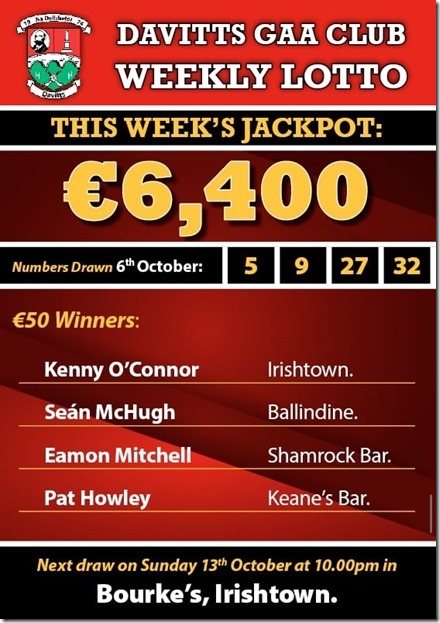