Davitts minor team got back to winning ways with an unlikely, 1-8 to 0-10 victory over table toppers Balla, in Balla on Friday evening. Davitts, showing much more urgency than in the previous two games, took the game to their hosts from the start and led by 0-6 to 0-3 at the break, with Mayo minor Donie Ronayne and Cathal Higgins in tremendous form in defence and William Freeley having the proverbial blinder at midfield.

Balla came out firing in the second half and the sides were level midway through that half but a fantastic goal by Michael Clarke proved to be the game’s crucial score although Davitts goalkeeper Michael Mangan had to produce a wonderful save to ensure a Davitts victory. All in all this was a very satisfying victory with the entire team showing their true mettle.

Davitts U-14’s had their third league outing this year away to Westport on Thursday evening last. The young team were in search of their second win of the campaign but found the going tough for long periods in this game. The first half was dominated by the west Mayo team with Davitts struggling to find the battling form that had won them their previous match against Ballaghaderreen. However, despite Westport having the majority of possession and scoring opportunities, Davitts were still in touch at the break due to Caelainn Mullees heroics in goal and five points from midfielder Evan Ronane. A point a piece from Jack Ronayne and Cian Naughton also added to Davitts tally. Half Time Score: Westport 1-8 Davitts 0-7.

The second half was a more balanced affair, but Davitts finished the game rueing some missed opportunities to level during the half and a late goal scored by substitute Keelan Cosgrove gave hope to the visitors in the last minutes of the contest. Davitts other scorers in the second half were Jamie Mullee and Cian Treacy, both with a point each. Final Score: Westport 2-11 Davitts 1-9.

Davitts U-16 team continued on their winning ways in Glencorrib on Tuesday evening, defeating Shrule by 2-19 to 0-8 in the league. The sides were level, 0-3 apiece, after ten minutes but Davitts dominated the remainder of the first half getting some lovely long range points before midfielder Jack Rodgers smashed home a terrific goal. Davitts led by 1-13 to 0-5 at halftime.

Both teams started the second half off slowly but a second Davitts goal, a cracking effort from Padraig Mangan, finished off the homeside’s challenge and Davitts finished the game out well tagging on some lovely points before the finish.

The best of luck to Colm Boyle and Michael Conroy on Sunday as Mayo attempt to capture the National Football League Div 1 title against Cork in Croke Park. The last time Mayo won the league the side also contained two Davitts stars in Alan Roche and David McDonagh, a good omen perhaps? 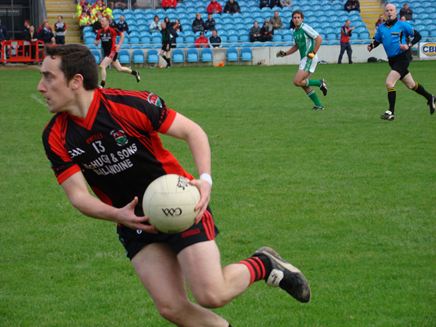 Aidan is a dynamic corner forward, deceptively strong and possessing a sensational burst of pace, making him a nightmare for corner backs. A former St. Colmans College and Sligo I.T. star, Aidan was unfortunate to miss out on Davitts All-Ireland Intermediate final appearance through illness. Son of former Davitts great Frank, the popular Aidan (also known as McFly) is an avid darts player who represents Hanleys Bar in the South Mayo darts league, coached by the legendary Dermot O Sullivan Jnr (Sulley). Recently spotted on Sky Sports with a cryptic message for teammate Michael Conroy.

Davitts extended their 100% winning league record in Div 1E to four with a fine 3-15 to 0-7 victory over Kiltimagh in Ballindine on Sunday. With the assistance of the wind in the first half, Davitts got off to a flyer with a David McDonagh goal in the first minute. The same player repeated the dose minutes before the break to leave the home side ahead by 2-6 to 0-2 at halftime.

Davitts played better football in the second half and cut through the Kiltimagh defence at will with Josh Ronayne in outstanding form and it was fitting that he shot Davitts third goal to put the game firmly out of Kiltimagh’s reach.

Davitts hosted Knockmore in the first round of the Michael Walsh Senior League in Ballindine on Saturday evening with the sides sharing the spoils in a well contested match. Davitts elected to play with the strong wind in the first half and, thanks to a storming display at midfield by team captain Ronan McNamara, led by four points as the first half entered injury time but a late Knockmore surge yielded a goal and a point to leave the sides level at the break, 0-6 to 1-3.

The Davitts team showed tremendous spirit in the second half with Kevin Gallagher, showing a welcome return to form, Michael Waldron, James Cummins and Michael Ronayne starring in defence, and McNamara, Keith Prendergast and Aidan McTigue inspirational, as the home side fought hard for every ball in a heart warming display. A pressure free kick by Liam Kearns with the last kick of this entertaining game earned a gallant Davitts team a deserved draw.

Davitts, leading by 2-6 to 0-4 at half time, after playing into the wind in the first half, amazingly were defeated by St. Muiredachs, 2-11 to 3-7, in a minor league tie played in Ballindine on Friday evening. Davitts were by far the better side in the first half with Donie Ronayne, Cathal Higgins, Gerard McWalter, John Macken, Andrew Peters, Liam Noone and Thomas Waldron driving them on. Two well taken goals by Andrew Peters and William Freeley had Davitts firmly in the driving seat at the break.

The second half however was completely the opposite with the visitors taking over around the middle of the field. A fine goal by Liam Noone kept Davitts ahead but Muiredachs would not be denied and they hit the winner in the dying seconds of the game.

All credit to the U-14 teams of Davitts and Ballaghaderreen, who served up an exciting league game in desperate conditions in Ballindine on Thursday evening. Davitts withstood a late surge by Ballaghaderreen to win by 1-14 to 2-8 although Davitts keeper Caolan Mullee had to make a splendid save in the last minute to ensure the victory.

Davitts had led by 0-8 to 0-3 at halftime with outstanding midfielder Evan Ronayne (0-6), Jack Ronayne (0-1) and Daniel Huane (0-1) the scorers. At the back Ciaran Fahy, Aidan Macken, Cathal Moran and Ciaran Waldron were in top form, while Evan Ronayne and Jamie Mullee were playing very well at midfield.

Daniel Huane, an exciting prospect, scored the Davitts goal midway through the second half, reacting quickest to a rebound, to give the Ballagh keeper no chance. Ballaghaderreen fought back well but Davitts deservedly hung on in those nailbiting last few minutes. 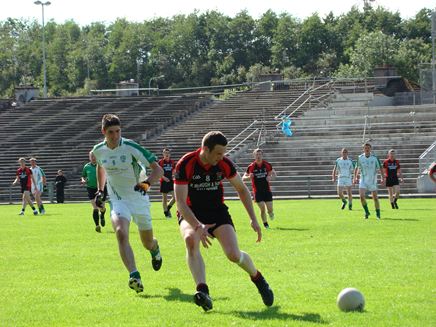 This week sees the start of Senior player profiles. The upgraded Davitts GAA Club website (coming your way in June) will feature a dedicated page where all player will be stored and added to as new profiles become available. To kick-off the series, who better to start with, then the Senior team Captain for 2012…

Ronan has been a top first team player for Davitts for the last twelve seasons although serious injuries to his back and both knees has interrupted his football career somewhat. One of the outstanding midfielders in the county, Ronan has represented Mayo at all grades. His fielding ability and superb long range shooting both from open play and placed balls makes Ronan a hugely valuable player and the commitment he gives the club is a great example to the younger players. Honoured with the first team captaincy this year, Ronan is keen to make his mark as Davitts return to the senior ranks in Mayo. As well as Gaelic football, Ronan is a big fan of Irish dancing, and follows the career of his idol, Michael Flatley very closely. No mean dancer himself and regularly takes to the dancefloor on social occasions, he memorably danced himself to a standstill at the club’s Dinner Dance three years ago.