Davitts Junior team turned on the style in Kilmaine on Wednesday evening, defeating the locals by 3-23 to 1-7 in the South Mayo Championship. Davitts took full advantage of the wind that assisted them in the first half and led by 2-16 to 0-2 after a sparkling display of attacking football. The goals were finished by Paul Carey and Matthew Trench, after sweeping moves, as those two players, Seamus Roche, Gerald Griffin and Shane Treacy terrorised the Kilmaine defence.

Kilmaine fought hard in the second half but could not close the gap and a third Davitts goal from captain Lawrence Daly, after another impressive passing move, completely finished off the game with ten minutes remaining. As well as Lawrence Daly, defenders Brian Clarke, Martin Cosgrove, JP Kirrane and Tommy Clarke (2) all got their names on the scoresheet in the second half.

Davitts Junior team travelled to Glencorrib on Sunday evening to play Shrule Glencorrib in the County B Championship. After a tentative first half display, Davitts powered on in the second half to win by 3-15 to 1-10.

Davitts were nervous looking in the opening minutes and a fortuitous goal from the homeside in the fifth minute didn’t help but the influential Paul Carey settled the nerves with a tenth minute goal after good work from Sean Waldron and Shane Mitchell. Good points from Liam Noone (4), Mattie Trench (2), Paul Carey (2) and JP Kirrane left Davitts ahead by 1-9 to 1-7 at the break.

Davitts moved through the gears in the second half with man of the match William Freeley and his midfield partner Sean Waldron controlling the possession in the middle of the field. The forwards began to run riot with subs Shane Treacy and Gerald Griffin injecting a lot of pace and urgency up front. Davitts added two more goals from William Freeley, with Sean Waldron providing the spectacular assist, and Martin Cosgrove after an incisive passing move involving several players, to put the game out of reach of Shrule Glencorrib. Davitts second half point scorers were Gerald Griffin (2), Liam Noone and Shane Treacy (3).

This was a very good team effort from Davitts with all of the 21 players contributing to the win. Padraig Mangan, Lawrence Daly, William Freeley, Sean Waldron, Paul Carey, Liam Noone, Mattie Trench, Shane Treacy and Gerald Griffin were outstanding.

No shortage of matches this week:

Monday June 27th, U-12 Summer League, away to Burrishoole at 7pm.

Thurs June 30th, U-14 Championship, away to Naomh Padraig (Killala) at 7pm.

Garrymore played hosts to neighbours Davitts in the County Senior Championship on Saturday evening and were full value for their three point victory. The homeside dominated the midfield sector for most of the game with man of the match Brendan Cunningham having a blinder alongside Shane Nally.

Liam Kearns opened the scoring with a tidy first minute point for Davitts but Garrymore replied with points from the impressive Mark Tierney (2) and Jimmy Killeen in the next five minutes. Ronan McNamara, after an excellent fetch, pointed in the eighth minute and Aidan McTigue put the visitors ahead on ten minutes when he flicked Liam Kearns long delivery to the Garrymore net after good work from Ronan McNamara.

Davitts however were unable to push on and instead, Garrymore took complete control of the remainder of the half. Tierney pointed and Caolan Crowe, a menacing figure throughout the match, collected a long delivery and shot on the turn giving Davitts goalie Adrian McNamara no chance in the 14th minute, to put his side two points up.

Further points from Killeen, Kenneth Lydon and Tierney (2) with Davitts only reply coming from a Cathal Hennelly point in the 21st minute, left Garrymore ahead by 1-8 to 1-3 at the interval.

Josh Ronayne pulled a point back for Davitts in the first minute of the second half and a Liam Kearns point narrowed the gap to three in the 10th minute. Two fine points from Shane Nally and Caolan Crowe restored Garrymore’s five point lead in the next two minutes. Liam Kearns and Josh Ronayne pointed for Davitts and Jimmy Killeen replied in the 20th minute before Shane Nally posted a monster free kick from 60 metres to the delight of the home crowd.

A Kearns point in the 54th minute was cancelled out by Brendan Cunningham, whose

shot for goal was expertly tipped over the bar by Davitts keeper Adrian McNamara. Indeed McNamara had kept his side in the game with two other fine saves in this period of the game.

Davitts were throwing everything they had at Garrymore in the closing minutes and scores from Colm Boyle and Liam Kearns left three points in it with the game entering injury time. They were unable to find the goal they needed however and Garrymore held on to gain the victory that keeps them in the Championship race.

Congratulations to Evelyn & Barbara on scooping the Jackpot of €10,100!! 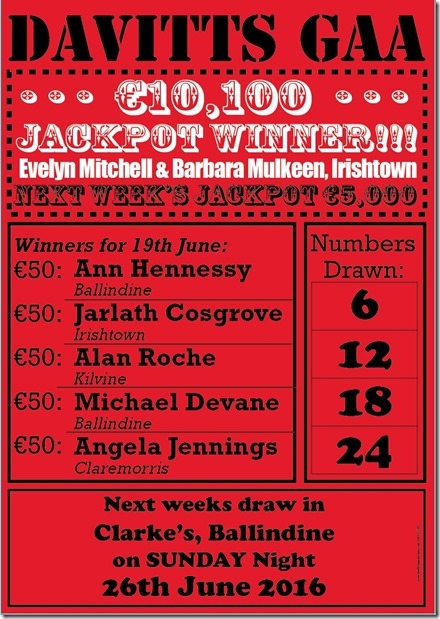 Davitts won this Division 1B Senior League tie against Moy Davitts in Ballindine on Sunday by a point and will be very relieved as the visitors pushed their hosts to the limit. A late point from a free by man of the match Cathal Hennelly, after he himself was fouled, swung the game in favour of Davitts after they had surrendered a seven point lead with just twelve minutes remaining.

Davitts had led by 0-7 to 0-5 at halftime with points from Aidan McTigue (2), Liam Kearns (2), Evan Ronayne, Ronan McNamara and Keith Prendergast but they probably felt it could have been more, especially as what appeared to be a stone wall penalty, after Ronan McNamara was unmercifully hauled down in the square, went unpunished to the amazement of both sets of spectators.

Davitts assumed control of the game in the second half and appeared to be cruising with points from Cathal Hennelly, Evan Ronayne (2) and Liam Kearns and a Ronan McNamara goal to leave the scoreline 1-11 to 0-7 in favour of Davitts with twelve minutes remaining.

Moy Davitts showed their mettle and two goals in the space of three minutes and a levelling point with five minutes on the clock had the homeside reeling.

Cathal Hennelly proved to be the hero for Davitts as he converted a long range free to give his side a win in a game that easily could have been won by Moy Davitts.

Davitts will know that this type of performance will not be good enough when they face Division 1A side Garrymore in the Championship next week but will be encouraged by the performances of Cathal Higgins, Colm Roche, James Cummins, Keith Prendergast, Declan Healy, Cathal Hennelly, Evan Ronayne, Aidan McTigue and Andy Peters.

Davitts just edged out Hollymount Carramore by the minimum margin in the South Mayo Junior Championship after a cracking tie played in Ballindine on Wednesday evening. Davitts won the game by 0-12 to 0-11 but it easily could have swung the other way in a very competitive match. The quality of the point taking by both sides was a feature of the game.

Hollycarra led by 0-7 to 0-6 after playing with the wind in the first half and Davitts looked the more likely winners at this stage, having defended superbly throughout the first half. The home side could also thank goalie David Mitchell who produced two excellent saves in the first five minutes to save what looked like certain goals. Davitts scorers in the first half were Evan Ronayne (3), Sean Waldron, William Freeley, and Mattie Trench.

The visitors really took the game to Davitts from the start of the second half and they tagged on two fine early points to go three up. A tremendous solo effort from Shane Treacy narrowed the gap to two and Evan Ronayne, who had a brilliant game, left a point in it after twelve minutes. Micheal Mangan and Sean Waldron swapped points with Hollycarra who seemed to be doing just enough to keep their noses in front. A marvellous Paul Carey point from way out the field levelled the game with a minute of normal time remaining and it was fitting that young Evan Ronayne, a constant thorn in the visitors defence, shot the match winning point in injury time to give Davitts a much needed win in the competition.

Nobody could question the commitment of any players from either side as they gave their all with David Mitchell, John Costello, JP Kirrane, Sean Waldron, Mattie Trench and Evan Ronayne starring for Davitts, as well as lively sub Shane Treacy. 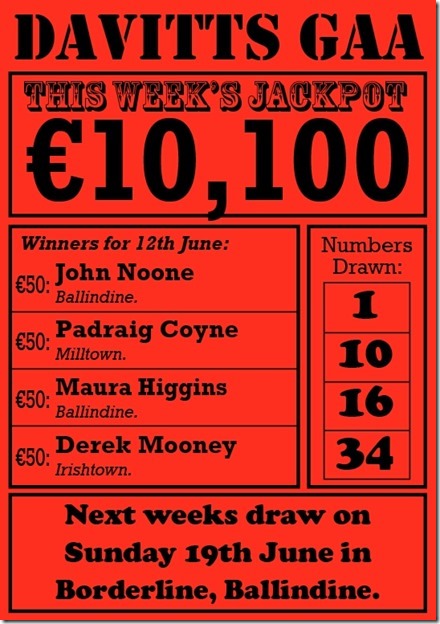 Davitts and Moy Davitts locked horns in the opening round of the Mayo Junior B Championship in Foxford on Saturday, with the spoils being shared after an exciting match. There was very little between the teams in the first half but the Moy Davitts lads led by 1-4 to 0-5 at the interval with Liam Noone (2), Padraig Mangan, Seamus Roche and Evan Ronayne on target for Davitts.

Moy Davitts started the second half in fine fashion and an unanswered goal and two points had them seven points up and firmly in the driving seat after ten minutes. The Davitts lads really showed their mettle for the remainder of the game and a confidently converted Liam Noone penalty, after Gerald Griffin was fouled, brought them back into the game. Points from Liam Noone (2), a beauty from Padraig Mangan, Sean Waldron, Gerald Griffin and Evan Ronayne left the minimum margin between the sides and a super Patrick Keadin point equalised the game with seconds remaining, after patient build up play by his colleagues.

Both teams will be disappointed at not winning this game but it certainly was a great advert for Junior B football.

Davitts U-14’s hosted Ballintubber in the County U-14 C Championship and the two sides produced a terrific game of football with the visitors coming out on top by three points, 3-18 to 4-12. Davitts, who have played in Division 4 of the league were facing Division 2 side Ballintubber, and it showed early on with the visitors getting into their rhythm and the homeside struggling to cope with their physically stronger opponents.

Two fine Davitts goals by Niall Treacy and Jack Trench and points from Treacy, Davy Hennessy and Trench (2) had Davitts trailling by 2-11 to 2-4 at the break.

Davitts stormed into the game in the second half and outscored their opponents by 2-8 to 1-4 in the opening 25 minutes of the half. Again Niall Treacy was in suberb form, scoring a tremendous second goal and setting up sub Jack Melvin for another. Treacy (2), Trench (3), Fenton Kelly and Jack Devane with points, had the sides level, 3-15 to 4-12 with five minutes remaining. Ballintubber however dug deep and added three late points to gain the victory.