Ballintubber defeated Davitts by 3-7 to 0-9 in this Senior League Div1A game played in Ballindine on Sunday. Both teams lined out without a number of regulars and amazingly after eighteen minutes of play, neither side had managed to score.  Ballintubber then hit 1-2 in the space of three minutes and added on a further goal and a point before the break to lead by 2-3 to 0-0 at halftime.

Davitts came to life in the second half and showed their true form. Urged on by Johnno Clarke, Alan Roche, Paul Carey and Josh Ronayne (the game’s standout forward), they took the game to the visitors. The homeside had fine points from Josh Ronayne (6), Andrew Peters, Fearghal McGrath and Seamus Roche to narrow the gap but the damage had been done in the first half.

Davitts travelled to Knockmore and were defeated by the homeside, 2-13 to 2-6, in Div 1D of the Senior League. Knockmore were in full control of this game in the first half and led by 2-9 to 0-2 at the break. In all fairness to the understrength Davitts team, they showed great bottle in the second half, outscoring their opponents, and really having a go at them, particularly in the final quarter.

Second half goals from Darren Connolly and Seamus Roche and points from Roche, Connolly and Liam Noone gave the scoreboard a better look as the Davitts lads fought tooth and nail in the last half hour.

Davitts best players in this game were Michael Waldron and Brian Clarke (both outstanding throughout), Padraig Mangan, John Costello and Darren Connolly.

Davitts and Burrishoole met in the County Junior B Semi-Final in Islandeady on Wednesday evening with the West Mayo side coming out on top by 3-9 to 2-11 after a great contest. While fixing a game like this on a Wednesday evening is, in a lot of people’s opinion, rather disrespecting towards the competition, the late venue change from Breaffy to Islandeady was way out of order. Both sides showed what the game meant to their clubs and the supporters who did make their way to Islandeady were treated to a rip roaring tie that finished with Davitts throwing the kitchen sink at their opponents, in the semi-darkness, but coming up just short.

Burrishoole looked the more purposeful team in the first half and led by 2-5 to 1-4 at the break, availing of defensive lapses to score the goals. Davitts goal came from Clive Hennigan with Liam Noone (2), John Costello and Richie Kilkenny the pointscorers.

Early second half points from Liam Noone and Darren Connolly narrowed the gap to two but Burrishoole dug deep and had extended their lead to six points, 3-7 to 1-7, with twelve minutes left on the clock, punishing another defensive error with a third goal. Points from team captain Tommy Mitchell and Richie Kilkenny and a Seamus Roche goal set up a grandstand finish.  Burrishoole rallied with two points and Seamus Roche and Darren Connolly for Davitts left the minimum between the sides when referee Declan Corcoran blew the final whistle as Davitts searched for the equaliser.

Thanks to the three lads who left the debs in Sligo, Wally and Luke who drove them and Tommy for getting off work early and coming down from Dublin for the game. This kind of commitment augers well for the future of the club.

Davitts senior team demonstrated that goals really do win matches when defeating Ballinrobe by 4-6 to 1-12 in the Michael Walsh Secondary League game played in Ballinrobe on Saturday evening. With both sides understrength, Davitts looked the more likely in the first half and led by 2-3 to 1-5 at halftime. Davitts first half goals came from wing back Johnno Clarke (after excellent work by Andrew Peters) and Darren Connolly, who finished a six man move with aplomb. Ballinrobe’s goal came in the last seconds of the half after a promising Davitts move broke down deep in the homeside’s half.

Ballinrobe assumed control of the game in the third quarter and raced into a 1-11 to 2-4 lead before two spectacular goals by Josh Ronayne and Mark Ronayne in the space of a minute swung the game back in Davitts favour. This was a game that could have gone either way but it was great to see the never say die attitude of the young Davitts side.

Davitts U-16 team were heavily defeated, 7-14 to 1-8, by a very good Burrishoole side in this B Championship game played in Ballindine on Tuesday evening. Davitts had to play second fiddle throughout and trailled by 4-6 to 1-2 at halftime. The early loss through injury to Davitts centre back and captain, Christopher Ryan, didn’t help the home side’s cause. Shane Treacy scored the Davitts goal with Evan Ronayne supplying the two points in that half.

Burrishoole continued to control the game in the second half as Denis Fahy, Patrick Keadin and Shane Treacy tried their utmost to stem the tide and Evan Ronayne showed flashes of brilliance with some classy points. 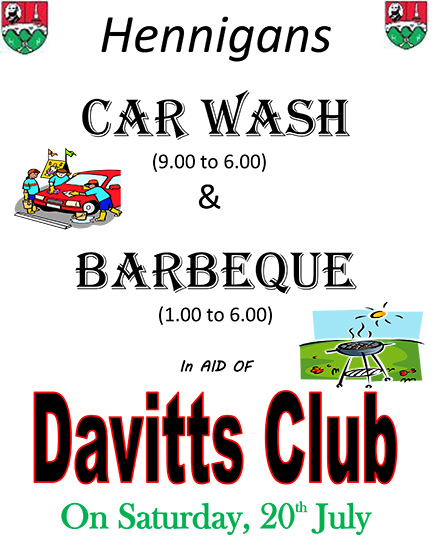 Please support Hennigans’ car wash fundraiser in aid of Davitts GAA Club on Saturday next, July 20th from 9AM to 6PM. This coincides with a barbeque from 1PM to 6PM! Please download the poster below and spread the word! More info in this post.

Juniors qualify for county semi-final with win over Swinford

Davitts qualified for the County Junior B semi-final after a hard fought win over a strong Swinford outfit in a very exciting quarter-final in Claremorris on Saturday evening. The final score was 2-15 to 1-12 as both sides gave their all in tropical conditions. A storming last quarter display by Davitts ensured victory in a game that was a fine advertisement for junior football.

Swinford were the better side in the opening half and led by 1-8 to 1-6 at the break. Davitts first half scorers were Seamus Roche (1-2), Darren Connolly (0-2), Tommy Clarke and Mark Ronayne.

Swinford extended their lead to 1-10 to 1-6 before Davitts moved into top gear. Excellent points from Tommy Clarke, Liam Noone, Seamus Roche and Darren Connolly (2) put Davitts in the lead before sub Sean Waldron got on the end of a fantastic move, started by corner back Brian Clarke, to bury the ball in the back of the Swinford net. Further points from Darren Connolly, Liam Noone and the outstanding Seamus Roche ensured the victory.

Davitts had terrific performers throughout the pitch, especially in the second half. Midfielders John Heneghan and Tommy Mitchell took control of that sector and there were top class displays from Michael Waldron, Tommy Clarke, John Costello, Liam Noone, Darren Connolly, Richie Kilkenny and man of the match Seamus Roche.

Davitts GAA Club is teaming up with Davitts Ladies GAA to hold an all day carwash and barbeque at Hennigan’s Centra next Saturday, 20th July. The barbeque kicks off at 1pm and runs through till 4pm, while the carwash will be open for business from 9am to 7pm. Why not take 15 minutes out of your day and come along for a nice burger while our teams of boys and girls wash your car!

Both Davitts and Davitts Ladies would like to thank John & Patricia Hennigan for their generosity in granting us the use of their carwash and their facilities. Hope to see you there!

Davitts got their County U-21 Championship campaign off to a winning start with an impressive 7-12 to 0-5 victory over Kiltimagh at sun-drenched Ballindine on Tuesday evening. Davitts will realise that more difficult assignments lie ahead and that this was a game that everything went right for them. David Mitchell was ultra-safe in goals while the defence looked mean and tigerish. Josh Ronayne and Michael Waldron dominated the midfield exchanges and the attack looked razor sharp throughout.

Davitts led by 4-4 to 0-2 at half time with team captain Josh Ronayne supplying a hat-trick of goals with the very impressive Andrew Peters scoring the fourth from the penalty spot. Three further goals followed in the second period via Darren Connolly, Peters and sub Gerard McWalter as Davitts maintained a blistering pace and intensity. Five subs were introduced and each one of them impressed.

Davitts qualified for the County Div 2 League Final after a superb 2-14 to 1-10 victory over Belmullet in Ballindine on Friday evening. This was a game of sparkling football played in front of a large crowd in beautiful conditions and helped by a fine performance from the referee John Finn.
Belmullet appeared the stronger team for most of the first half but after 20 minutes the homeside struck for a crucial goal. A move initiated by the excellent Dylan Keadin, involving Thomas Waldron, Liam Noone and Michael Clarke was finished to the net by Evan Ronayne. This gave Davitts the lead for the first time in the game, a lead they never relinquished. At halftime Davitts led by 1-6 to 0-8. The point scorers in that half were Liam Noone (2), who had to retire injured before the break, Evan Ronayne, Thomas Waldron (2) and Matthew Trench.
Davitts really took control of the game in the second half and driven on by Donal Ronayne, William Freeley, Padraig Mangan and the tireless Thomas Waldron, they began to dominate. Points from Trench (2), Waldron, Gerald Griffin, Michael Clarke and Evan Ronayne ensued before Matthew Trench scored a superb goal to put the homeside eight points clear. Belmullet replied with a goal from the penalty spot with five minutes remaining but two monster points from Clarke finished the game off in spectacular style.
This was a fantastic team performance from Davitts but all credit to the Belmullet team for their contribution to a very entertaining game.
Davitts: Micheal Mangan, Dylan Keadin, Donal Ronayne, John Huane, Jack Rodgers, Padraig Mangan, Seanie Bourke, Cathal Hennelly, William Freeley, Matthew Trench (1-3), Liam Noone (0-2), Evan Ronayne (1-2), Michael Clarke (0-3), Thomas Waldron (0-3), Gerald Griffin (0-1). Subs used: Patrick Keadin, Richie O Connor.