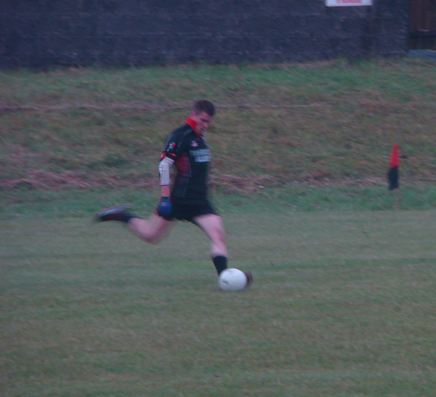 Davitts U-21 team travelled to Charlestown on Monday evening and defeated the local team, 2-8 to 0-8, to ensure a quarter final slot in the County B Championship. Charlestown made all the early running, scoring three unanswered points in the opening ten minutes before Davitts started to take control with Keith Prendergast kicking three superb points, county minor Josh Ronayne adding two more, and a Fergal McGrath point, to leave two points between the sides at half time.

The game was won however in the first two minutes of the second half when Davitts scored two brilliant goals, the first from Josh Ronayne, and a second from Fergal McGrath after some splendid approach play by Michael Waldron, Prendergast and Ronayne. Charlestown battled away valiantly but will rue a number of squandered scoring chances in the second half.

Paddy Kirrane was sound in goals while in front of him Kevin Gallagher, Kieran Mooney, young Mark Ronayne, the outstanding Johnno Clarke and Laurence Daly all defended well. Shane Mitchell and John Heneghan won plenty of possession at midfield, while Josh Ronayne (1-3), Fergal McGrath (1-2), Keith Prendergast (0-3), Richie Kilkenny and the outstanding Michael Waldron formed a most impressive forwardline. Davitts introduced three subs over the course of the game, Liam Kearns, Keith Glynn and Darren Connolly, and they all made their mark as Davitts marched confidently into the quarter finals.