Davitts needed a win against Claremorris to qualify for the semi-final of the County U-19 A Championship and, after a very entertaining match, they came up just short with the sides ending up level at the final whistle.

Claremorris looked the better team in the first half and led by 0-8 to 0-4 at halftime. Dylan Gallagher (3) and Fenton Kelly were the Davitts scorers in the half. Things could have been worse for Davitts were it not for some excellent goalkeeping by Tristan Diskin.

Fenton Kelly pointed in the first minute of the second half and Cathal Corless goaled in the 36th minute to tie the game. Claremorris replied quickly and had the ball in the Davitts net within a minute. Two Cathal Corless points were cancelled out by two similar Claremorris scores. Fenton Kelly narrowed the deficit to two points with a 48th minute point but Claremorris capitalised on a Davitts handling error two minutes later to fire home their second goal. They added a point 30 seconds later but a neat Jack Devane point kept Davitts in touch. Two Claremorris points in the 53rd and 54th minutes put them seven ahead and looking like the certain winners but Davitts were not finished yet.

A long ball into the Claremorris goalmouth was cleverly flicked by Cathal Corless to centre back Thomas Ronayne and he was hauled down by the Claremorris keeper, who was black carded. Cathal Corless converted the resulting penalty to narrow the lead to four points with five minutes normal time remaining. Dylan Gallagher and Fenton Kelly ensured a grandstand finish with points in the 56th and 59th minutes. Claremorris tagged on a point in the 60th minute but two minutes later, another long delivery by Conor McDermott into the danger area was flicked across the square by Cathal Corless to Jack Devane who gleefully finished to the net past a hapless Claremorris keeper to level the match. Davitts were hoping for one last play but the ref blew the final whistle after the kick out.

Both teams played some great football in the tricky conditions. Claremorris are a good strong side and will take some beating in this competition. Davitts slip up in the opening round, losing to Castlebar Mitchels when they really should have won, came back to haunt them. They are a fine side though with some excellent football players.

Tristan Diskin had a great game in goals. Micheal Hett and Thomas Ronayne were solid central figures in a defence where Brian Birmingham, Mark Birmingham, Brian Og McTigue and Fionnan Gallagher all had their moments. Sean Keadin, Ethan Boyle and Aaron Trench did well when they were introduced in the second half. Fenton Kelly (0-4) was very good at midfield, producing an energetic display and giving an exhibition of high fielding. He got great support from young Burke Briere, a rapidly improving player. Cathal Corless (2-2), Dylan Gallagher (0-4) though obviously carrying an injury, and Jack Devane (1-1) showed their undoubted class. Conor McDermott covered every blade of grass over the hour with Fionn McLoughlin and Davey Hennessy also working tirelessly throughout the game. Injury deprived Davitts of the services of Jack Melvin. 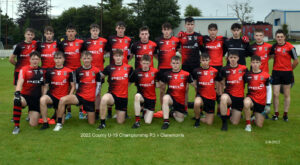