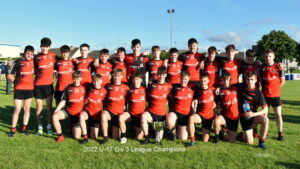 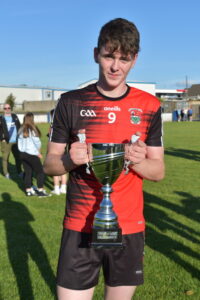 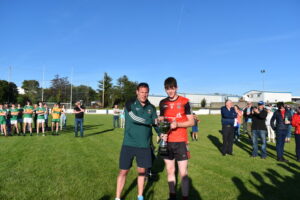 The County U-17 div 3 League final was played in perfect conditions in Claremorris on Sunday evening with Davitts defeating Kilmovee by two points, withstanding a late rally from the East Mayo outfit. When those two side met earlier in the League Kilmovee were the winners by a five point margin but this time it was Davitts who made the running and just managed to keep their heads in front after a very entertaining game of attacking football.

Davitts, playing with the wind advantage in the first half, opened the scoring with a classy Dylan Gallagher point in the second minute. Peter Horan, an excellent forward, equalised a minute later. The rampaging Sean Keadin and Peter Horan exchanged points before Davitts struck for their first goal with Ethan Boyle getting on the end of a great move involving Ciaran Treacy and Fionn McLoughlin to finish with style in the 10th minute. Two minutes earlier Kilmovee had a great goal chance themselves but were denied by a miraculous goal line intervention by Brian Hett. The very influencial Dylan Gallagher extended Davitts lead with a 12th minute point with Oran Frain replying for Kilmovee thirty seconds later. Dylan Gallagher pointed in the 20th minute and further Davitts points from Fionn McLoughlin and Ronan Kelly sandwiched two Peter Horan points before Conor McDermott bagged Davitts second goal in the 26th minute after being cleverly set up by Dylan Gallagher. Peter Horan pointed for Kilmovee before Davitts struck for a third goal in the 29th minute with Fionn McLoughlin, who had a superb game, finishing after great work by Ciaran Treacy and Sean Keadin. Peter Horan fired over the last score of the half as Davitts went in ahead by 3-6 to 0-7 at the halftime break.

Kilmovee needed a good start to the second half but it was Davitts that started the brighter. Dylan Gallagher pointed in the first minute of the half and the same player set up Fionn McLoughlin for his second and Davitts fourth goal in the 32nd minute to give his side a commanding twelve point lead. Kilmovee knuckled down and began to chip away at the lead. Two Peter Horan points, one each from Colin Duffy and Oisin Duffy and an unfortunate own goal narrowed the deficit to five points before Davitts scored again, a 50th minute Fionn McLoughlin point. Davitts excellent goalkeeper Dylan O Brien pointed a 45 in the 54th minute with Ciaran Treacy, another Davitts player of real quality, getting his name on the scoresheet with a 58th minute point. Colin Duffy and Peter Horan pointed for Kilmovee,  and in a grandstand finish, Horan again goaled, a piledriver of a shot from a twenty metre free kick. The same player pointed three minutes into stoppage time, to leave just two points between the teams. The referee John McHale blew the full time whistle after the resulting kick out as Davitts clung on to the delight of the Davitts team and supporters.

Kilmovee showed terrific spirit especially in the second half and they have top notch players in Colin Duffy, Sean O Dowd, Oisin Duffy, Declan Duffy and Peter Horan, players we will hear more about in the future.

In Dylan O Brien (0-1), Davitts have an excellent goalkeeper. Brian Hett and Sean Keadin (0-1) were outstanding defenders in the full back line. Noah O Brien, Aaron Trench and Ethan Boyle (1-0) formed a very effective halfback line. Tadhg Feerick and Brian Corless both made fine contributions when introduced to bolster the defence in the second half. Team captain Mark Birmingham led by example at midfield with Burke Briere getting through an amount of work beside him. Conor McDermott (1-0) had a superb game as had Dylan Gallagher (0-4) and Ciaran Treacy (0-1) in the half forward line. Fionn McLoughlin (2-2) and Ronan Kelly (0-1) worked tirelessly inside with Aaron Conneely Basham an energetic sub after he was sprung from the bench. Sean Meehan, Conor Feerick,Ben Corless, Fionn McTigue, Harry Fallon, Darragh Garvey and Ruadhan O Conaire completed the Davitts panel.