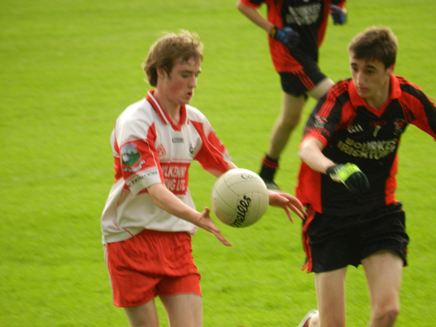 Davitts U-16 team suffered their first competitive defeat of a great season in the County Championship 3 final against Aughamore in McHale Park on Thursday evening. The final scoreline was 2-7 to 1-6.

Aughamore started off brightly as the Davitts team got stuck in the traps, and they led by 1-2 to 0-0 after ten minutes. Davitts got off the mark with an Evan Ronayne point and this was followed by points from Padraig Mangan and Cathal Hennelly as the team settled down. A cracking goal by Evan Ronayne after great work from Padraig Mangan and Gerald Griffin put Davitts in front and the hard working Gerald Griffin extended their lead with five minutes remaining in the first half. Aughamore were reeling at this stage but fair play to them, they responded well scoring the last two points, to leave the sides level, 1-4 apiece, at the interval.

As in the first half, Aughamore started the second half in whirlwind fashion and had an unanswered 1-3 on the board after ten minutes, their goal a superb finish worthy of settling any county final. Davitts tried their hearts out but the stop start nature of the rest of the game never allowed them to get into a rhythm like they did in the opening period. Aughamore slowed the game down at every chance, to the frustration of the Davitts players and supporters, a tactic being used a lot in football presently. Unfortunately Davitts frustration was compounded by the fact that referee Mel Kenny has had better days with the whistle.

Points by Jack Rodgers and Gerald Griffin narrowed the gap to four points and when Evan Ronayne blasted a superb shot from 20 metres off the crossbar with five minutes remaining, it was obvious that it was not going to be Davitts night. At this stage the visibility was very poor with darkness rapidly decending on the unlit McHale Park and it was probably just as well that only four minutes of injury time was played because there was a danger that someone might get a real injury.

Aughamore’s opening ten minutes of both halves, when they scored 2-5 of their total, swung the game in their favour. They have a fine team and showed that they have a lot of ability.

Every Davitts player gave their all on this occasion but the breaks just didn’t go their way. They can be hugely proud of their displays this season and many of these lads will be top players for club and county in the future if they keep playing football.

A big thank you to the management team of JP Kirrane, Liam Griffin and Joe Mangan for the sterling work they put into the team all year.