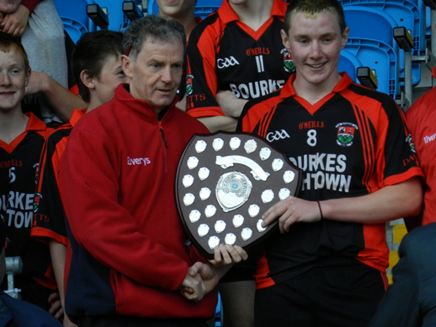 Davitts U-16’s produced a stunning display to defeat Hollymount-Carramore by 4-12 to 2-7 in the County Division 4 League final in McHale Park on Friday evening. A splendid goal cleverly scored by Shane Treacy in the 3rd minute put Davitts on their way and some tremendous point taking by man of the match Padraig Mangan, Davitts inspirational captain, and two further goals by Evan Ronayne and Jack Rodgers had Davitts ahead by 3-6 to 1-5 at half time.

Davits extended their lead with second half points from Gerald Griffin, Cathal Hennelly, Mikey Devane, Evan Ronayne and Padraig Mangan and Ronayne’s second goal, a delightful chip, with fifteen minutes remaining effectively finished the game as a contest. Hollymount-Carramore battled bravely to the end as Davitts took their foot off the pedal but there was only going to be one winner.

Thomas Monaghan was a capable goalkeeper while Dylan Keadin and Dylan Higgins were excellent as usual in front of him. Michael Mangan marshalled the defence very well at centre back flanked by the tight marking Denis Og Fahy and Seanie Burke who attacked at every opportunity. Padraig Mangan (0-6) and Jack Rodgers (1-1) were superb at midfield throughout.

In attack Cathal Hennelly (0-1), Mikey Devane (0-1), Gerald Griffin (0-1) and Shane Treacy (1-0) worked tremendously hard for the team while Evan Ronayne was top scorer with 2-2 after playing another starring role. Jamie Mullee, Richie O Connor and Kieran Waldron were introduced in the second half and they played their part in this win while the other panellists include Caolan Mullee, Christopher Ryan, Francis Griffin, Lorcan Diskin and Conor Macken.

Well done to the team management of JP Kirrane, Liam Griffin and Joe Mangan who have put so much work into this team.