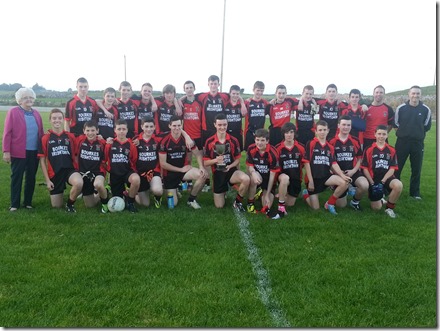 Those people that say that goals win games would have been well pleased with themselves at the end of this thrilling South Mayo U-16 B Final played in sunny Kilmaine on Tuesday evening. Davitts ability to carve out the major scores, as well as preventing them at the other end, swung the game in their favour, but the result was in the balance right up to the final whistle.

Twelve minutes into the second half Hollymount/Carramore were awarded a second penalty but their very well struck effort was superbly saved by Caelainn Mullee, Davitts outstanding netminder. As in the first half, Davitts broke down the field after the penalty miss and a sweeping move ended in the awarding of a penalty which Evan Ronayne buried into the corner of the net. Davitts got their second penalty five minutes later and Evan Ronayne gleefully despatched it to the net giving the keeper no chance whatsoever.

Hollymount/Carramore kept coming back and they finally managed to pass Mullee and score a goal eight minutes from time to give them a 1-12 to 3-5 lead. Davitts showed great bottle however and Jack Ronayne scored his second goal, a brilliant individual effort with four minutes remaining while Ryan McLoughlin got in on the goalscoring act two minutes later after a great move involving several players, to clinch a hard earned victory over a gallant Hollymount/Carramore team.

Caelainn Mullee showed why he is rated so highly with an accomplished display in goals. Ciaran Fahey and Jordan Flanagan defended superbly in the full back line. Dimitri Trench, Niall Kearns and David Devane formed a youthful and very effective half back line. At midfield, Jamie Mullee and John Kilkenny worked very hard over the hour. Francis Griffin, Ryan McLoughlin (1-0) and Thomas Corless played very well up front with Evan Ronayne (2-5) and Jack Ronayne (2-0) grabbing the crucial scores and causing panic in the Hollymount/Carramore defence throughout the game.

Hollymount/Carramore played their part in this very exciting final and in Nathan Moran and Conor Heneghan they have two players with enormous potential.

Congrats to the Davitts squad and their managers Declan Kirrane and David Ronayne.