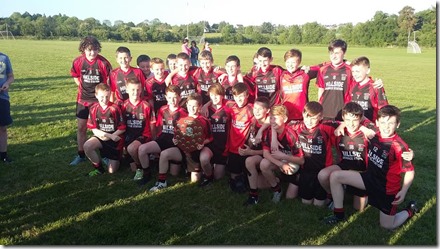 Davitts and Charlestown met in the County U-14 Division 4 League Final in Kiltimagh on Thursday night with Davitts running out the convincing winners. Davitts made all of the early running and had scored four clinical goals in the opening quarter through Joe Prendergast (2), Niall Treacy and Jack Trench. Charlestown rallied well and had their best spell in the closing ten minutes of the first half, bagging three goals of their own. Davitts points from Fentan Kelly, Niall Treacy (2), Jack Devane, Joe Prendergast, Jack Trench (2) and a fifth goal finished by Jack Devane had them ahead by 5-7 to 3-5 at halftime.

Davitts dominated the second half with Jack Trench goaling again after a terrific move involving several players. Charlestown only managed a single point in that period while Davitts tagged on some fine points via Jack Trench (6), Joe Prendergast (2), team captain Zack Keadin and Fentan Kelly to complete their impressive tally.

This is a well balanced Davitts team laced with fine footballers that have obviously been coached well. What they lack in size is more than compensated by their skill levels and tenacity.

Gavin Ring was impressive in goals, confident and cool throughout the game. Michael Hett, Brian Og McTigue, Thomas Ronayne, Fionan Gallagher and the outstanding Charlie Phillips defended superbly. The hardworking Fentan Kelly had an excellent game at midfield getting great assistance from Sean Feerick in the first half and John Wallace in the second half. Niall Treacy led the attack well with his crafty play while captain Zack Keadin, Joe Prendergast (who had his best game to date), Jack Devane and ace marksman Jack Trench were in unstoppable form. Subs Davy Hennessy, Cathal Corless and the very lively Jack Melvin did well when introduced.