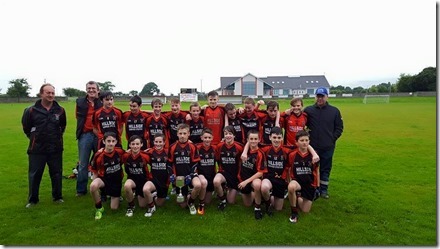 Davitts captured the South Mayo U-14 B Title in fine style with a 10-12 to 4-10 victory over Carras after a fantastic display of attacking football in Ballindine on Thursday evening. The loser’s score of 4-10 would have won most games and were it not for the excellent defending of Thomas Ronayne and Fionan Gallagher in particular and the brilliant Gavin Ring in goals, the result would have been a lot closer. Michael Hett, Brian Og McTigue, Davy Hennessy and Cathal Corless all worked extremely hard in defence.

Sean Feerick and Fentan Kelly were two energetic midfielders as Davitts led by 5-6 to 2-9 at the break.

The star of the show though was undoubtedly Niall Treacy, Davitts brilliant centre half forward, who as well as scoring 5-5, was directly involved in most of his side’s scores. Some of the movement that led to Davitts scores was superb with Zack Keadin (1-1), Joe Prendergast (1-1), Jack Devane (2-2), Jack Melvin (1-1), Jack Trench (0-1) and Cathal Corless (0-1) completing the massive tally. Dylan Walsh, Stephen Rattigan, Brian Bermingham and Tristan Diskin all played their part in this victory.

Well done to the team management of Derek Byrne, Frank Kelly and John Trench who have put a lot of work into this team. The cup was presented to Davitts captain Jack Devane after the game by Michael King representing the South Board.