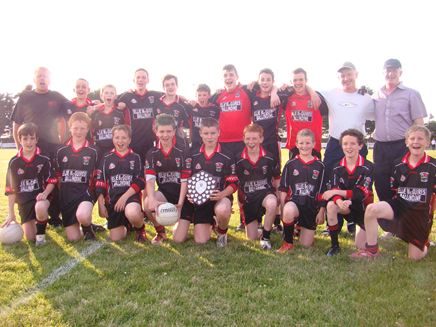 On Thursday evening the U-14’s captured the County Div 3 League title in style, defeating St. Gerards by 3-14 to 1-6. When these sides met in Ballindine a few weeks ago, St. Gerards won with plenty in hand, but Davitts reversed that result in emphatic fashion in the final. Man of the match Tommy Waldron had Davitts 1-1 up after five minutes, and St. Gerards dominated the rest of the first half and led 0-6 to 1-1, but late points by the irrepressible Waldron and Liam Noone left the sides deadlocked, 1-3 to 0-6 at the break.

The second half belonged to Davitts, with Donal Ronayne and Shane Cummins working extremely hard at midfield, and the attack scoring at will, with the creative Matthew Trench pulling the strings, and supplying the ammunition for Noone (1-6) and Waldron (2-7) to keep the scoreboard ticking over. St. Gerards tried hard, but when they got forward they ran into a defence that was very uncompromising, with Thomas Charles and William Freeley in outstanding form. As well as those mentioned, Davitts had other stars in goalie Michael Clarke, Liam Connolly, Jonathon Fahy, David O Toole, Jack Rodgers, Cathal Hennelly and Gerard Griffin. Mattie Joe Connolly presented the trophy to Davitts captain Donal Ronayne after the game. P.S. The Garrymore Club had the ground in tremendous condition for this game, it is a great credit to the club.