Sunderland supremo swoops for psychologists (or is that psychos?) 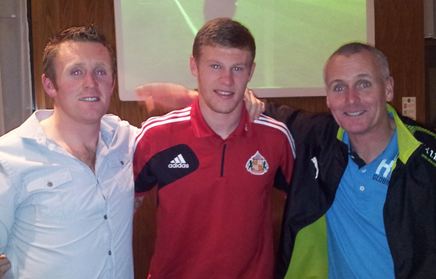 Hot on the heels of Donegal manager Jimmy McGuinness’ much publicised move to Celtic, Martin O’Neill, on hearing about Davitts great success in the Mayo Minor League Division 3 Final, invited two of the selectors, Paul Carey and Tom “Dandy” Kearns over to England to give a pep talk to his struggling Sunderland team.

O’Neill was mightily impressed with our two heroes and said that he would be willing to offer Dandy a contract as a sports psychologist as he had a calming influence on the players. Davitts club are considering taking action against Sunderland over this illegal approach. It is no co-incidence that Sunderland’s poor run ended at the weekend when they defeated Fulham. PC and Dandy are seen here pictured with Sunderland and Ireland winger James McClean.