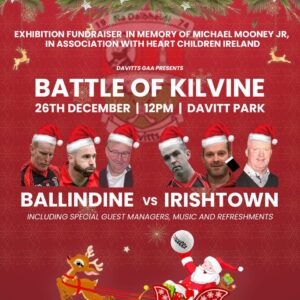 Davitts GAA are having a charity fundraising football match on St. Stephen’s Day in Davitt Park at 12pm. The match will feature a Ballindine selection taking on an Irishtown selection with the winners receiving a cup in memory of Michael Mooney Jnr, a former Davitts player and a wonderful supporter of the Club. The teams will include a mixture of current players and ex-players. Some big names are being lined up to manage the teams and it is rumoured that both squads have been training hard for a few weeks now in preparation for the big game. Both squads will be revealed on Christmas Eve. It’s going to be a fun day.

Heart Children Ireland will be the recipients of all money raised by the event. Anyone wishing to donate can do so via the link below: