Davitts captured the South Mayo U-16 B title in Ballindine on Tuesday evening after a hard fought victory over Hollymount Carramore.

Davitts started brightly with two points in the opening two minutes courtesy of Ronan Kelly and the very impressive Aaron Conneely Basham. The visitors came storming into the game and reeled off a goal and six points between the 6th and the 13th minutes. In the fourteenth minute Davitts got a lucky break when team captain Dylan O Brien’s 45 dipped and ended up in the HollyCarra net. Davitts added points via Aaron O Dea (2), Aaron Conneely Basham and Conor McDermott before Ciaran Treacy goaled just before half time, a neat finish after a superb pass from Conor McDermott, to put Davitts ahead by 2-6 to 1-6 at the interval.

HollyCarra opened the second half scoring with a 41st minute point but Davitts replied with a brilliant Aaron Conneely Basham goal two minutes later after great work from Noah O Brien and Ciaran Treacy. Ciaran Treacy added a point in the 45th minute which was cancelled out by a similar HollyCarra score five minutes later. Dylan Gormally and Aaron O Dea pointed in the 50th and 54th minutes and two goals from Conor McDermott and Ciaran Treacy in the 55th and 57th minutes finally ended the spirited HollyCarra challenge who shot the last score of the game, a 61st minute point.

Well done to the team management of Tommy Clarke and Frank Kelly. 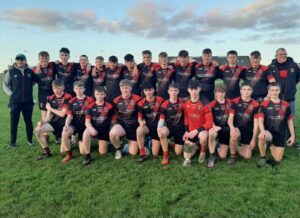