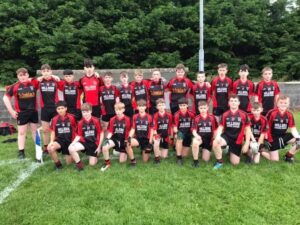 The Neale and Davitts met in the South Mayo U-14 B Final in Hollymount on Thursday evening with The Neale proving too strong for a very determined Davitts outfit. When the two sides met in Cong earlier on in the competition, The Neale had a comfortable twelve point winning margin. With two minutes of normal time remaining in this game however, only a point separated the sides but The Neale held their nerve and kicked three late points to win by four points.

Davitts got the ideal start with a goal from Conor McDermott in the first minute. The Neale fired over four points in the next seven minutes before Ronan Kelly levelled the game with an eighth minute point. Ciaran Treacy put Davitts ahead with a neat point but The Neale replied with three points in the 10th, 11th and 13th minutes before Davitts influenctial midfielder Conor McDermott fired in his second goal on 15 minutes. Wasteful forward play cost Davitts dearly in the next ten minutes as they spurned two gilt edged goal chances and The Neale, possessing two top notch inside forwards, capitalised shooting a goal and three points in that period. Brian Hett pulled one back with a 27th minute point which was cancelled out in first half injury time to leave The Neale ahead by 1-11 to 2-3 at the break.

As in the first half Conor McDermott opened the second half scoring with a pointed free in the second minute. The Neale shot two points in the third and sixth minutes before Davitts sub Michael Hughes goaled in the tenth minute. The Neale pointed in the 14th minute and when they goaled three minutes later to go seven points ahead it looked like they were going to coast to victory but a spirited Davitts side thought otherwise. Dylan Gormally pointed in the 17th minute and goaled a minute later to narrow the deficit to three points. The Neale pointed in the twentieth minute but Dylan Gormally crashed in his second goal in the 22nd minute to leave just a point between the sides. In all fairness to The Neale, they rallied well and scored three fine points in the 25th, 26th and 27th minutes but Michael Hughes, making a big impact since his half time introduction, banged in his second goal in the 28th minute to leave just a point between the teams. The Neale again showed their mettle and points in the 30th, 31st and 32nd minutes sealed their hard earned victory.

Dylan O Brien had another excellent game in goals for Davitts while in front of him Brian Hett (0-1), Noah O Brien, Oisin O Gara and Ben Corless fought manfully with Tadhg Feerick, Brian Corless and Burke Briere (having to revert to an unfamiliar defensive role)having superb games. Conor McDermott (2-1) and Ethan Boyle worked tirelessly at midfield. Fionn McTigue, the hard working Ciaran Treacy (0-1), Ronan Kelly (0-1) and Dylan Gormally (2-1) linked well in an attack that was boosted by the introduction of Michael Hughes (2-0), Aaron Conneely Basham and Aaron O Dea.

The Neale were deserving winners and we wish them well in next week’s County semi-final.