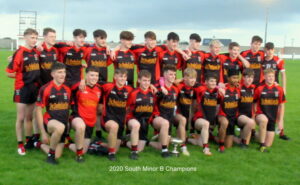 Davitts Minor team captured the South Mayo B Championship after a tremendous display to defeat a gallant Carras side in Garrymore on Friday evening. The two sides had met twice in the competition already with each side winning but on this occasion a very determined Davitts side would not be denied.

Davitts played against the wind in the opening period and Niall Treacy opened the scoring with a second minute point. Mark Gibbons equalised in the fifth minute. Jack Devane for Davitts and Evan Heraty for Carras exchanged points before Jamie Hession put the homeside ahead in the 13th minute, pointing after a powerful run.

Davitts got a firm grip on the game in the second quarter and the game swung in their favour in the 16th minute when they scored a goal of the highest quality. Brian Og McTigue, outstanding throughout the game, won a vital turnover to start a superb move involving Thomas Ronayne, Fenton Kelly and Joe Prendergast, and ending with midfielder Fenton Kelly firing home an unstoppable left footed drive into the top corner giving Carras keeper Daniel Ferriter absolutely no chance. Jack Melvin pointed in the 21st minute to extend Davitts lead and when Fenton Kelly pointed two massive long range frees in the 22nd and 23rd minutes, one sensed that it was going to be Davitts day. Joe Prendergast goaled again for Davitts in the 29th minute, coolly converting the rebound after Brian Og McTigue’s goal attempt came back off the post. Mark Gibbons and Jamie Hession shot the last two points of the first half in the 31st and 32nd minutes to leave Davitts ahead by 2-6 to 0-5 at halftime.

Carras needed a good start to the second half but it was Davitts that got the perfect start with a Jack Devane point in the first minute followed by another cracking Fenton Kelly goal, after great work by Jack Trench and Niall Treacy. Carras battled away but the Davitts defence were superb throughout,  defending as if their lives depended on it. Mark Gibbons pointed two frees before the second water break to narrow the gap to nine points. Jack Melvin stretched Davitts lead in the 47th minute with a fine point. Jack Devane, Niall Treacy (2) and Fenton Kelly for Davitts and Mark Gibbons (2) and Tom Smyth for Carras pointed in the last ten minutes as Davitts went on to win by 3-12 to 0-10.

Davitts had heroes all over the pitch. Tristan Diskin never put a foot wrong in goals and Sean Feerick, Charlie Phillips, team captain Jack Trench, Thomas Ronayne and Brian Birmingham were superb in a defence where Brian Og McTigue gave an absolute masterclass. Fenton Kelly (2-3) had a magnificent game at midfield where he got great assistance from the hard working Fionnan Gallagher and Jack Melvin (0-2). Niall Treacy (0-4) led the attack well and Jack Devane (0-3) was dangerous inside with Dylan Gallagher, Joe Prendergast (1-0) and Davey Hennessy all in top form. Zack Keadin, Bon Glynn and Dylan Walsh played their part when introduced. The panel was completed by Gavin Ring, Mark Birmingham, Sean Keadin, Cathal Devane and the desperately unlucky Cathal Corless, who missed the game due to injury.