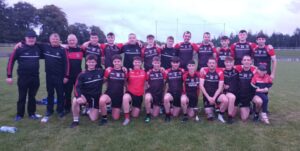 Davitts travelled to Cong on Friday evening to contest the South Mayo Junior B final. A large crowd witnessed an exciting game, full of endeavour from two very well matched sides, with the visitors edging it by a point. At no stage of this game did more than two points separate the teams. It’s always said that goals win matches though, and three well taken second half efforts by the Davitts lads secured a hard earned victory for the team managed by Billy Kearns, Liam Griffin and Tommy Ronayne (BLT).

Davitts had wind advantage in the opening half and a first minute point by Liam Kearns was followed by a cagey and scoreless ten minutes before the homeside opened their account. The Neale took the lead in the 14th minute and Liam Kearns equalised two minutes later. Again, when the Neale pointed in the seventeenth minute, Kearns replied to level the game and that process was repeated in the 21st and 22nd minutes. Brian Clarke shot a fine point in the 24th minute as Davitts regained the lead and a similar score by the homeside left the sides deadlocked on five points each at halftime, after a first half where both sets of defenders were impressing.

Davitts had introduced Liam Macken before halftime, and his twin brother Aidan for the second half, and both played major roles in this win after cutting short a holiday in Italy. The Neale fired over the first two points of the second half in the 31st and 32nd minutes but in the 34th minute Davitts struck for their first goal. John Kilkenny’s well struck 45 hit the post and the wily Johnno Clarke was first to react and he coolly sidefooted the rebound past the Neale keeper to put his team back in front. The Neale reeled off three quickfire points in reply in the 35th, 36th and 37th minutes before a great Liam Macken burst was stopped illegally in the square and referee Kevin Connelly had no hesitation in awarding Davitts a penalty. Liam Kearns held his nerve and slotted home the spot kick as Davitts found themselves back in the lead.

The Neale equalised in the 41st minute with a well taken point but Shane Mitchell put the visitors back in front with an inspirational point in the 46th minute. The two sides slugged it out over the next ten minutes but terrific defending at both ends of the pitch prevented any scores before The Neale shot points in the 56th, 57th and 58th minutes as they looked set for victory. Davitts, showing great heart, were not finished however, and after a patient move involving several players, Ryan McLoughlin picked out the strong running Aidan Macken who crashed the ball to the back of The Neale net from twenty metres to score a goal of tremendous quality. The Neale tried their best to find an equalising point but Davitts were able to withstand all that was thrown at them in the three minutes of injury time as all fifteen players defended superbly.

Tristan Diskin was a solid goalkeeper and  Sean Feerick, Charlie Phillips, Jordan Flanagan, Fionnan Gallagher, Micheal Hett and Brian Birmingham were tigerish in defence. Johnno Clarke (1-0), Shane Mitchell (0-1) and Aidan Macken (1-0) did great work at midfield and their timely scores were crucial to the outcome of the game. Danny Corless, Brian Clarke (0-1), Brian Og McTigue (up until his precautionary retiral) and Liam Macken worked tirelessly as did Ryan McLoughlin, John Kilkenny and top scorer Liam Kearns (1-4). The introduction of Darragh McGale and John Costello in the final quarter added leadership and experience when Davitts needed it most.

Davitts captain Danny Corless was presented the cup afterwards by Michael Waldron representing the South Board.