The scoreline suggests that this was a comfortable win for Davitts in the Senior League Division 2 final but, in all fairness, the result of this game was in the balance until the closing minutes of the game with two late Niall Treacy goals sealing the deal for the South Mayo men.

The first half was a very tentative affair and after PKC opened the scoring with a point in the third minute, a Jack Ronayne free two minutes later levelled the game. Jack Ronayne pointed again in the tenth minute but PKC replied in the next minute with a point. A brilliant Evan Ronane point in the thirteenth minute was followed by a neat 23rd minute Darragh McGale point. In between those two scores Davitts players Ronan McNamara and Dmitry Trench collided heavily resulting in the temporary removal of Mac and the teak tough Dmitry being replaced five minutes later. Two PKC points in the 25th and 27th minutes levelled matters again but two more from Jack Ronayne in the closing minutes of the first half followed by a PKC point on the half time whistle left Davitts ahead by 0-6 to 0-5 at the break.

Darragh McGale opened the second half scoring with a Davitts point in the first minute but three PKC points in the next four minutes put them ahead for the first and only time in the game. Jack Ronayne equalised in the 36th minute and Fenton Kelly, a player of massive potential, restored Davitts lead a minute later. Two Niall Treacy points in the 40th and 41st minutes extended the lead before PKC pulled one back in the 42nd minute.  Two superb points from Shane Treacy and Evan Ronane for Davitts were matched by two PKC points as the game came to life. A 48th minute Jack Ronayne point was followed by a brilliant Niall Treacy goal, after great work by Ronan McNamara and Evan Ronane, in the 57th minute as Davitts assumed control of the game. PKC shot two points but another Niall Treacy goal three minutes into injury time, after great work by Danny Corless, put Davitts seven points ahead and Liam Kearns finished off the game with another point before the final whistle.

Both teams will benefit from this very sporting game which, while lacking championship intensity, was an ideal preparation for the much more serious matters in two weeks time.

Davitts had a very competent goalie in Keith Prendergast with Micheal Hett, Cathal Higgins and Thomas Ronayne in fine form in the full back line. Jordan Flanagan was most impressive when he was introduced midway through the first half. Team captain Colm Boyle,as he always does, led by example getting great support from his wing men, Dmitry Trench and Aidan Macken. Ronan McNamara and Fenton Kelly (0-1) were an excellent midfield partnership. Up front the hard working Johnno Clarke, Evan Ronane (0-2) and Shane Treacy (0-1) formed a formidable half forward line and inside, Niall Treacy (2-2), Jack Ronayne (0-6) and Darragh McGale (0-2) were In tremendous form throughout the game. Substitutes Brian Clarke, Liam Kearns (0-1) and Danny Corless all showed up well when they were introduced. 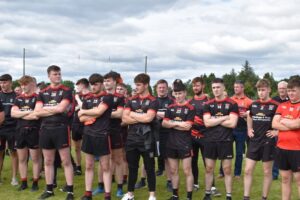