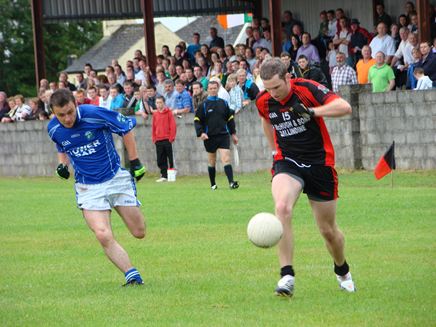 Shy, modest and hardworking are just three words you would never use to describe Davitts and Mayo’s star forward. On top of his game, this guy is unmarkable. He has blinding pace, strength, accuracy and the on field cuteness that all great forwards need to stand out from the rest.

including a string of man of the match awards on the way. A great talker, some of his team talks reduced teammates to tears, as did his speech at last year’s Dinner Dance. His form attracted the attention of Mayo senior team manager James Horan who recalled Michael and Colm Boyle and the rest is history, as both lads have justified their selection in style. An All-Ireland Under- 21 winner in 2006, Michael is now enjoying the build-up to his third All-Ireland Senior final for Mayo.

To rewind after a hard day’s work or after a tough training session, Michael loves listening to music. Possessing a lovely singing voice, his neighbours in Skevard regularly hear him singing along to his favourite songs, from artists such as James Blunt, The Pussycat Dolls, Ronan Keating and Jedward. Michael also loves to go to the gym to talk to other people as they work out and is a big fan of the TV show “The Inbetweeners”.