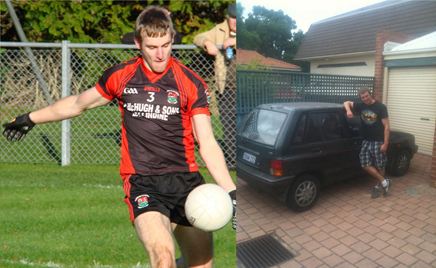 Frankie (aka Lula) was a goalkeeper for many years before moving outfield and establishing himself as one of the best full backs in the county. A tough, no nonsense defender, he played a leading role for Davitts in their successful bid to win the Mayo and Connaught Intermediate Championships last year before emigrating to Australia. He showed what a superb clubman he is by returning for the All-Ireland final in February, and came on as a second half sub in that game.

Before leaving for Oz, Frankie was a very popular DJ in the South Mayo area. He is also a lover of fancy cars and his green post van was the envy of his teammates before he left. It appears that Frankie has not lost the ability to pick up an auto bargain judging by the lovely picture of vehicle Reg. No 1BAM222 (source: Kevin Pups Daly).