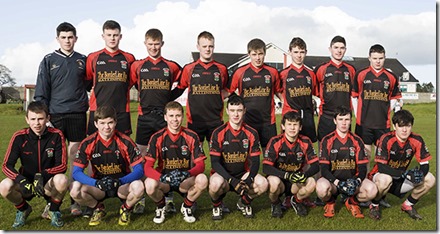 Davitts Minor Team took on table toppers Kilmeena in Div 3A of the league on Tuesday evening and produced a fine performance to win by 2-15 to 3-5. Davitts, playing against the wind in the first half, had led by 0-9 to 2-2 at the break with Evan Ronayne (5), Jack Ronayne (2), Niall Kearns and John Kilkenny getting the scores. Ciaran Fahy was a rock in the Davitts defence getting good assistance from Jordan Flanagan (until he got injured), David Devane, Thomas Corless, Aidan Macken and Francis Griffin.

Kilmeena tried hard to get back into the game but two goals from impressive duo Daniel Huane and Jack Ronayne sealed the victory for Davitts. Evan Ronayne, Niall Kearns, Donal Kirrane, Dimitri Trench, Daniel Huane and Liam Macken notched the second half points for the homeside.